Venezuela's San Carlos circuit achieved international attention early in its life when it hosted four world championship motorcycle events but since then has seen a slow and sad decline, not helped by the country's current perilous economic state.

Opened in 1970, the circuit was built on around 85 hectares of land, with a simple but fast 1.678 miles (2.700 km) layout and, for the times, modern amenities, including a steel-framed pit building and control tower. Financing for the project came from the influential Boulton family, and the whole complex cost 7.9 million bolívars to complete.

Very quickly it became recognised as one of the best designed and fastest circuits in Latin America and, in the more buoyant times of that era, signalled a bright new dawn for the country's motorsport development. Indeed, at one stage the course was earmarked for a Formula One test, though this never actually materialised.

It was, however, on the San Carlos track that future motorcycle and touring car champion Johnny Cecotto would taste his first laps, while other local aces to hone their skills included Carlos Lavado, Iván Palazzese and, on four wheels, Juan Cochesa.

Cecotto the star as Formula 750 arrives

So quick was Cecotto's rise to prominence (he was the then-youngest world champion when he took the 350cc title aged 19 in 1975) that momentum grew for a Venezuelan Grand Prix. Under the encouragement of Cecotto's team manager, the iconic Andrea Ippolito, the circuit underwent improvements and in 1976 the Formula 750 World Championship paid its one-and-only visit as a warm-up to bigger things.

The two-heat race proved a controversial affair. Home hero Cecotto took the first heat but Kawasaki's Gary Nixon appeared to have won the second leg. However, the race organisers credited Yamaha's Steve Baker with the victory instead after discovering a scoring error. Nixon protested the result at season's end as, had he been awarded the race win and not Baker, he would have taken the overall title by one point.

At a later hearing, the actual timing and scoring result sheets could not be provided by the Venezuelan organisers, so the FIM decided that the only fair thing to do in the circumstances was to annul the results altogether, instead relegating the event to non-championship status and leaving Nixon even more miffed!

Despite this, further improvement works were needed and at the end of 1976 a new extension was added, bringing the lap distance up to 2.569 miles (4.135km). It was on this revised circuit that the most dazzling chapter of the circuit's history would be written.

On 20 March 1977 the circuit's - and the country's - first Grand Prix took place, with races for the 125cc, 250cc, 350cc and 500cc classes. Amid much excitement, home hero Johnny Cecotto duly won the 350cc race and also managed to place a creditable fourth in the main 500cc event, which was won by Britain's Barry Sheene on a Suzuki. Walter Villa won the 250cc race on a Harley-Davidson, while the 125cc class was taken by Bultaco's Ángel Nieto. There was even more for the home crowd to cheer as Iván Palazzese came home in third place, to become the youngest-ever podium finisher, aged just 15.

It was Sheene however, how could properly lay claim to the title 'King of San Carlos', as he proved utterly unbeatable in the top class, taking victory on the next two visits of the World Championship. And while Johnny Cecotto would enjoy no further home success, Carlos Lavado finished second on his international debut in the 250cc race in 1978 before going on to win the 350cc class the following year, his first Grand Prix victory.

Financial problems would spell the end of the Grand Prix after the 1979 edition, so through the 1980s and 1990s, the circuit settled into hosting domestic racing events only. Formula Ford 1600 and 2000 were mainstays, as were Ferrari Challenge and GT races.

Much needed financial-investment was hard to come by and, as time went by, the San Carlos track faded from international view. Local championship races thinned out as the country's economy dipped and this only served to exacerbate the situation. A circuit which had once been hailed as a template that would put many European circuits to shame was lagging behind in maintenance and safety features, despite the best efforts of circuit bosses.

This was put into stark contrast in 2000 when during a sportscar event when the Ferrari Challenge car of Francois Guerin collided with a Ford Mustang out of the fast last corner, spinning across the front straight and into the pit lane, where the car struck the metal support pillar of the pit garages and burst into flame. Guerin survived, despite horrific injuries, but three others in the pit lane were not so fortunate. It was one of the darkest days for Venezuelan motorsport and spelled the end of any ambitions of San Carlos hosting anything more than club racing without substantial investment.

That has not been forthcoming so far and with the current economic and political difficulties the situation looks unlikely to change any time soon. The track has been put up for sale by its owners but to date has not been sold. The kart circuit, built in the early 2000s, remains very popular.

Planning a visit to San Carlos? Find the best deals near to the circuit on hotels, apartments and rooms to rent from the map below.

The Autódromo Internacional de San Carlos is located in San Carlos, in north-western Venezuela. The nearest international airport is Arturo Michelena International Airport in Valencia, some 100 km or nearly two hours' drive to the north east.

The circuit is easy to find, being located next to Highway 5, which runs from Valencia, through Tinaco to San Carlos. The circuit is on the eastern outskirts of the city, with direct access from the main road. 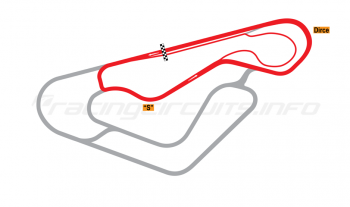 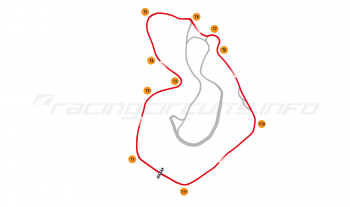 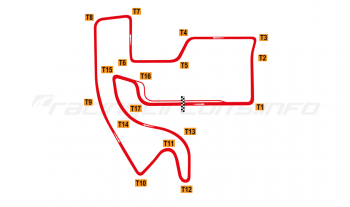