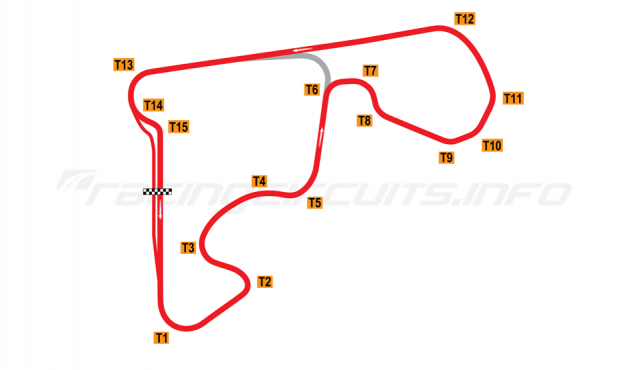 The Autódromo de Rivera, also known as the Autódromo Internacional Eduardo P. Cabrera, has been transformed into a top level national circuit after a decade or more of abandonment. Thanks to local government funding, the circuit is set to become a hub for Uruguyan racing and will also play host to championships from across the border in Brazil.

The circuit is located on Uruguay's northern border, near to the city of Rivera and its Brazilian counterpart, Santana do Livramento. In the late 1940s the local automobile club was keen to establish a motor racing track. Thanks in no small to the tireless efforts of racer Eduardo P. Cabrera, a prime mover in the club, and with the co-operation of the trade and border authorities of both cities, a short 0.7 mile club circuit opened in September 1951.

Racing flourished and by 1962 the course was extended to 1.45 miles. Facilities were good for the day, with the upgraded track featuring pit boxes for 14 cars, a snack bar and toilet facilities for spectators. There was no paved pit lane, however, with racers utilising a grass strip in front of the pit boxes. The track would be named in memory of Cabrera, who was killed in a crash at the Brazilian Tarumã circuit.

The circuit hit its stride in the 1970s, becoming an important venue on the racing scene in both Uruguay and, thanks to its close proximity, southern Brazil. As time passed, however, there were few improvements and the course fell far from modern standards. A lack of general maintenance led to the deterioration of the track surface and the circuit was deactivated towards the end of the 1990s. The focus of racing would switch to the new circuits over the border in Brazil.

After more than a decade of neglect, plans were put forward to reopen the track, again with the support of the local Rivera government, which put forward 48 million pesos from a development fund to complete the necessary works. Work on the reconstruction and expansion began in 2012, which saw a new extension built and the entirety of the track widened and resurfaced. A new infield tunnel was inserted and brand new pit lane and hard standing paddock created opposite the old pit boxes. The circuit direction was also switched, with the circuit now running in an anti-clockwise direction.

The 1951 circuit was not included in the plans, but much of the 1962 layout survives as the short course, albeit in much widened form. The new section of track features a sweeping sequence of left-hand bends, deliberately modelled after the Turn 8 complex of the Istanbul Park circuit. A long back straight leads into a revised final set of corners and run-off areas were created around the whole circuit, in many cases for the first time.

The modernization was completed under the supervision of Brazilian Jhonny Javier Bonilla, who is the track chairman of the National Committee Circuits for the Brazilian Automobile Federation and also oversaw the construction of the Velopark in Porto Alegra. The works were completed by November 2013, in time for rounds of the Uruguyan national touring car championships.

The Autódromo de Rivera is located in northern Uruguay at Rivera, close to the Brazilian border. The nearest airport is Rivera International Airport, around 30 minutes to the southwest of the circuit, offering flights to Montevideo and nearby cities in Brazil.

The circuit is located to the west of the city in the Gran Bretaña Park. It can be reached by heading out of the city on Presidente Giró until it joins Camino al Autódromo, which will lead directly to the circuit.

Find the best hotel and room deals near to Autódromo de Rivera: