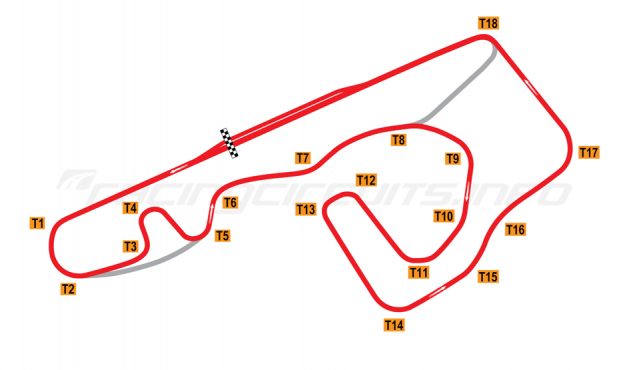 When you mention motor racing circuits located in a desert, thoughts tend to turn to the Middle East and the likes of Dubai, Bahrain and Qatar. But you need to head to South America to find another circuit among the dunes: Peru's Autódromo Tacna. The country's second permanent circuit has undergone a small revival in recent years and, while not as frequently used as La Chatuna, Tacna in far south of Peru is considered by drivers to be Peru's best course.

The circuit was built by the Automovil Club de Tacna (ACT) in 1992, although it had been many years in the making. Since being founded in 1962, the club had organised races in the local area on a number of temporary facilities but always had hankered after building something more lasting. In the late 1980s the club's plans began to take shape, thanks to the determination of members and the support of local businessmen Antonio De Col and Antonio Mazuelos. The local municipality also came on board and a plot of land was chosen next to the highway between Tacna and the city of Arica across the border in Chile.

By August of 1992 the dream was realised with the opening of the circuit. The track has four possible layouts - two each of the short and long courses - and even some gentle undulations, marking it out from other circuits in Peru. It also has a large grandstand which gives good views across the circuit, as well as numerous spectator banks.

Regional championships sprang up at the new venue and Formula Three also made several visits, while the track was twice a host to the prestigious "Peruvian 6 hours". After a few leaner years, Tacna is now beginning to break back into national consciousness. The prestigious Campeonato de Circuito Turismo Competición (CCTC) - previously held exclusively at La Chatuna - visited in 2015 and the event was judged one of the most popular of the year.

The terrain in the desert offers temperatures between 10 ° and 20 ° degrees in winter and 16 ° to 30 ° degrees in summer, making Tacna ideal for year-round racing.

Autodromo Tacna is located in the Magollo district, around 13 kilometers from Tacna and close to the Chilean border. The nearest major airport is Coronel FAP Carlos Ciriani Santa Rosa International Airport, which is less than 15 minutes' drive to the north of the circuit, offering domestic flights. For international flights, another major airport is Chacalluta International Airport, near Arica in Chile, 30 minutes' drive to the south.

The circuit is located around 16 kilometers south of Tacna directly on the Carretera Panamericana (1S) and signposted from the road.

Find the best hotel and room deals near to Tacna: