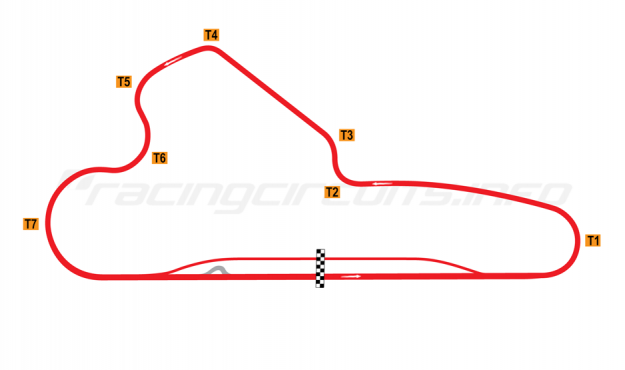 Peru's newest circuit, opening just south of Lima in 2010, has quickly established itself as the centre of racing in the country. Home to the 6 Horas Peruanas (6 Hours of Peru - one of the oldest races in South America) since its opening, La Chutana is also home to the majority of the rounds of Peru's most significant series, the popular Campeonato de Circuito Turismo Competición (CCTC).

The circuit opened in April 2010 and is a relatively short and fast blast covering less than 2.5 kms. Set in flat and dusty plot of land overlooked by distant mountains, the circuit benefits from wide expanses of run-off, though sand on the track is a constant issue.

Initially, the circuit ran only in an anticlockwise direction, but the addition of an optional chicane on the start/finish straight in 2012 meant that the course could also be run in reverse, though its original orientation remains the most commonly used.

2012 also saw the debut of a new event, the 200km of Lima, while other circuit-specific championships have sprung up, including the TC Honda Masters and the VW Gol R Cup. Additionally, in early 2013 was a separate kart circuit was opened, with karts available for the public to rent.

The Autódromo La Chutana is located around 70 kms south of the Peruvian capital Lima, in San Bartolo district. The nearest airport is Lima's Jorge Chavez International, around 90 minutes' drive to the northwest.

The circuit is located directly alongside Highway 1S, the Carretera Panamericana Sur, with the entrance road leading directly off the highway. Unfortunately, access is only available from the northbound side of the carriageway, so for visitors arriving from Lima, you must continue south for just under 9kms to the first interchange and then double back on yourself , adding around 16 minutes to the journey.

Find the best hotel and room deals near to La Chutana: