Mention a circuit built as a tourist road but with the intention of forming a racing circuit and you might think of Mount Panorama. Mention that it is in South America and built around a volcanic lake and you might think of Potrero de los Funes. But there's another track that is in an equally spectacular setting with its own rich history of motorsport: Ecuador's Yahuarcocha.

In fact, Yahuarcocha (pronounced Yaw-ara-kocha) is the history of motorsport in Ecuador. The country's only circuit and now a permanent venue, it has been the centre of racing action since its earliest days. Once the host of international sportscar races such as the Marlboro 12 Hours of 1971, today it holds numerous regional and national championships.

The circuit's origins began in the early 1960s with races organised on the streets of Ibarra by the local drivers and mechanics union, which proved hugely popular with people coming from across the Imbabura region to watch. It was after one of these races that friends José Idrovo and Luis Vaca Negrete found themselves on the hillside overlooking the Yahuarcocha lake, pondering how motorsports could be given a more permanent footing. A road around its perimeter seemed to offer possibilities - the major stumbling block being that it didn't yet exist!

Soon the pair had shared their ideas with their friends and the local motorsport community, who took to the concept immediately. Within a short period of time a club had been formed (Club de Automovilismo y Turismo de Imbabura or CATI for short) under the leadership of José Tobar to begin turning the dream into a reality. Tobar began lobbying local business leaders and politicians for support, while the club raised finances by holding further street races and taking subscriptions.

The road around the lake is born

The groundswell of goodwill for the project received its first major success when the Municipality of Ibarra signed an agreement with CATI on June 28, 1962, granting the club the grounds for what would become the Yahuarcocha highway for a period of 20 years from January 1, 1963. Slowly but surely construction work got underway, though with a huge amount of earthworks required it would take some seven years for the track to be completed.

The CATI certainly didn't lack for ambition; in choosing to encircle the lake they had created a course which ran for 10km, taking in numerous fast sweeps and curves as it did so. After a monumental effort, finally it was ready for action and, on May 2, 1970 it was inaugurated. President of Ecuador José María Velasco Ibarra watched on as Fernando Madera Erazo took victory in a Reliant Scimitar GT from a field of racers drawn from more than 50 cities across the country.

Throughout the 1970s the track attracted a high profile across the region, particularly for its endurance sportscar races. The 1971 12 Hours is to date the most prestigious race to have been Ecuador, with several overseas visitors taking part in the event which was heavily sponsored by Marlboro. Tony Adamowicz co-drove to victory with Greg Young in a Young American Racing Team Ferrari 512M/S, barely six months on from a fearsome crash in the Sebring 12 Hours which all but destroyed the car.

Further three and six hour events followed and by the middle of the decade, the track has given itself the 'International' moniker, thanks to the numbers of drivers from Colombia and Peru who were taking part in the races. The truth, however, was a little different as the circuit was certainly not able to keep pace with the latest in international safety regulations, so the likelihood of ever seeing significant overseas participation again was becoming a diminishing dream.

Once again, CATI proved to be visionaries and, realising the danger that their circuit was falling behind, began work on a solution. A new course, using only a small portion in the northeastern section of the 10km course, was proposed. This would feature a permanent track which could be joined to the public road to create a purpose built circuit, in a similar fashion to that which had been tried so successfully at Belgium's Spa-Francorchamps. It would make use of the existing grandstand at the start-finish, allied to new modern pit and paddock area, complete with restaurant and medical centre.

Approval was soon given and the new circuit - named the Autódromo Internacional José Tobar - opened in 1984. At 3.7 kilometres or 2.3 miles this was a much more contemporary layout, with a constant width of 14 metres and, unlike the old course, run in a more normal clockwise direction. It was still fast, beginning with a series of flat out sweeping corners before diving off onto the new infield. As with Spa, it was felt that the character of the track had been retained.

The new venue heralded another renaissance, with a diverse series of categories visiting through to the 1990s, including Mexican F3, SudAm F3 and even the GT Marlboro de las Américas, a regional event for IMSA-style GTU cars.

Today, the circuit continues to be the epicentre of Ecuadorian motorsport and occasional races from across the border in Bolivia.

Planning a visit to Yahuarcocha? Find the best deals near to the circuit on hotels, apartments and rooms to rent from the map below.

The the Autódromo Internacional José Tobar is located next to the Yahuarcocha lake on the eastern outskirts of Ibarra, Ecuador. The nearest major airport is Mariscal Sucre International Airport in Quito, around two hours' drive to the south.

To reach the circuit from the centre of Ibarra, take Av. Cristobel de Troya (Highway 35) heading northwards until you see the lake on your right and the tree-lined entrance boulevard and Yahuarcocha sign. Turn right onto Salida de Laguna de Yahuarcocha and then turn left onto Av José Tobar y Tobar y Gabriel Mistral - this is actually part of the original circuit. Continue along the road until you reach the circuit entrance. 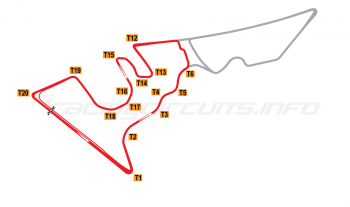 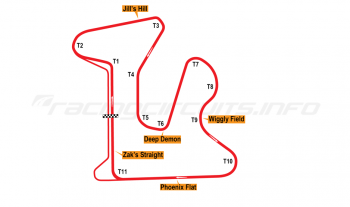 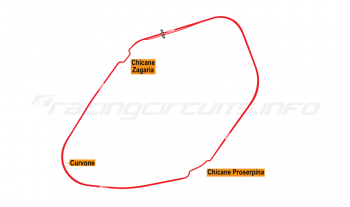