The Autódromo Ricardo Mejía was Colombia's first purpose-built circuit, opening with great fanfare and a grid of international stars at the beginning of the 1970s, only to close abruptly after less than a decade's use.

Its loss was felt keenly, but this ultimately spurred on the establishment of the successful Tocancipá facility, securing the future of circuit racing in the country.

Its origins began in the street races that were organised at various locations in Bogotá during the 1950s and 1960s. Sports cars, in particular, were popular and the Club Los Tortugas organised the 'San Diego' street races. In the late '60s it was realised that a more permanent facility would be an advantage, and the club looked set to take advantage of the chance to make a race course around the Parque de la Florida lake, in conjunction with the District of Bogota.

That was when benefactor Ricardo Mejía stepped in to offer land he owned, north of Bogota, as well as the necessary funding to build a course. Dedicated year-round to motorsport, it was to be built to the latest international standards. It didn't take long for all involved to understand that this was an exceptional opportunity and plans were soon being drawn up to make it a reality.

The Autódromo Internacional de Bogotá quickly was named after its benefactor and soon construction began in earnest. With an eye on elevating Columbia alongside its South American counterpart Argentina as host of a Formula One race, the new course was designed by the same group of architects that were involved with the ambitious Ontario Motor Speedway, which was also being developed simultaneously in California, USA. Input was also received from Giuseppe Bacciagaluppi, technical manager of Italy's Monza circuit.

Given its architects, it is perhaps not surprising the final design comprised an eight-corner road course contained inside an outer tri-oval, though if anything the configuration was more reminiscent of Brazil's Curitiba course than anything created in the USA. It was, however, ultra-modern (for the time) and comprised mainly of medium speed corners, overlooked by large grandstands from which the spectators could see the whole course.

The main road course measured 2.439 miles / 3.925 km, though two shorter configurations could also be used. The outer oval course was 1.429 miles / 2.300 km and initially, it was not clear which direction would offer the best racing, so all of the courses were designed from their outset to be run in either direction, although a clockwise rotation generally became the standard for the road courses.

Construction took place through the end of 1970 and right up to the new circuit's inauguration in February 1971, with the final asphalt layer being laid just 48 hours ahead of competition. As befitting the country's first permanent circuit, the Colombians decided the inauguration should feature an all-star list entry list entirely of international imports from the European single-seater scene. Prime among them was double F2 World Champion Graham Hill, alongside the likes of Derek Bell, Henri Pescarolo, Jo Siffert, Rolf Stommelen and Silvio Moser.

The "Copa Presidente de la Republica" was watched over by a large and expectant crowd of 50,000 spectators, which fittingly also included President Misael Pastrana. Held over two 30 lap heats, it was Englishman Alan Rollinson who took pole position, only to suffer various misfortunes in the race (sustaining chassis damage which kept him out of heat two). Swiss driver Jo Siffert dominated both heats to end up the overall winner. Fellow Swiss racer Jürg Dubler was second in the first heat, but failed to finish heat two, leaving Graham Hill as the overall runner up on aggregate.

A week later, they did it all again, with the same grid of assembled stars competing for the Gran Premio Ciudad de Bogotá on February 14. Once again the format was two 30 lap heats to decide the race on aggregated times. Siffert appeared seat to continue his dominance, with pole position and a win in heat one, before a broken distributor stymied his efforts in race two. Alan Rollinson was left to take the second heat and the overall win, offering some recompense for his misfortunes the week before.

So ended the international adventure. While the weekend had undoubtedly been a major success - the promoters still made a $200,000 profit, despite the expense of bringing over the European stars - it never quite became the springboard to a Formula One race as had been hoped. Instead, that accolade went across the border to Brazil, where Interlagos established itself as the host of South America's most enduring Grand Prix.

Racing flourishes with one notorious competitor

Despite this, the Ricardo Mejía circuit still flourished, as interest in motorsport across Colombia and the wider region continued to explode. Simca and Renault 4 production car series, the latter sponsored by Marlboro, proved extremely popular, helping to nurture the careers of a number of local stars, including Jorge Cortes, Jaime Vasquez, Pablo Montoya (father of Indycar star Juan Pablo Montoya), Honorato Espinosa and Pablo Gomez.

It was in the series for the boxy French hatchbacks that the circuit acquired its most notorious competitor - Pablo Escobar. Ostensibly a successful businessman who sold used bicycle among other activities, Escobar entered the series in 1979, enjoying some success - he would emerge as series runner up, despite missing several races. While the world would come to understand the true source of his finances - cocaine - in the years that followed, it was clear that his fellow competitors also understood the 'score'; there were no great protests at his successes in a spec-racing series, despite his reportedly average skills behind the wheel. Some cars, it seemed, were more equal than others...

Escobar's exploits would provide something of a footnote for the circuit, when in 1980 - for reasons that have never seemed entirely clear - Ricardo Mejia decided to shut up shop for good, putting the land out to pasture. In subsequent years, his two sons could not agree on the future of the circuit - one wanted to restart racing, while the other wanted to continue farming - sealing its fate.

Gradually, parts were sold off and redeveloped - a golf course occupies a portion of the northern end, while business units occupy much of the rest - so today only a few sections of the track remain faintly visible in the landscape. You would be hard-pressed to know that this was once the home of motorsport in Colombia.

The Autódromo Ricardo Mejía was located on the northern outskirts of Bogotá, close to the Avenida Carrara 45. Entry was from Calle 201.

Virtually nothing now remains of the circuit, with undergowth and subsequent development having overtaken much of the original plot.  The Centro Comercial Mega Outet has obliterated a large portion of eastern end of the circuit, ironically now incorporating a major BMW dealership.  To one side of the development you can just trace the faint outline of the start finish straight and the initial curvature of the banked first corner, while a few lumps and bumps in the ground elsewhere provide only a slight hint at what had come before. 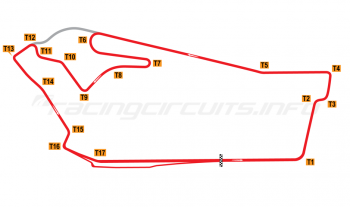 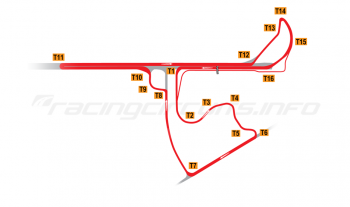 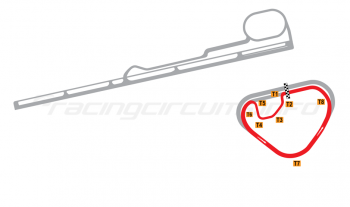