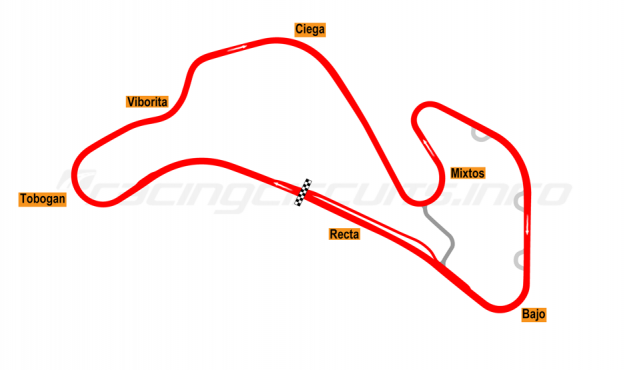 The Autódromo Interlomas was once the premier facility in Chile, host to the top categories of racing in the region, including the famous SudAm F3 Championship. Recent years have seen it overtaken by the more modern Codegua circuit, though it still maintains an active calendar of local and national events.

The track opened in 1996 near to Temuco, the capital of the Araucania Region and was the brainchild of local racing enthusiasts, who worked tirelessly for a number of years to bring their ideas to reality. With a fast and flowing layout, which is somewhat reminiscent of Australia's Phillip Island circuit, the 10-corner circuit was very quickly a driver favourite.

Grandstands boast a capacity for 7,000 spectators and the wooded surrounds make for an attractive environment to enjoy the racing action, while a professional karting facility can also be found near to the main circuit entrance. Pit facilities are fairly basic ‒ the tin-roofed pit garages hark back to an earlier era ‒ but the three-storey control tower is at least able to provide a more modern approach, with VIP hospitality areas, press room and race control.

Finances have not been available to keep pace with international racing safety standards, but nevertheless the circuit still maintains a busy national and local racing calendar. The main TC 2000 touring car category is a regular visitor, as is the national Superbike championship. One of the seasonal highlights is the Tres Horas de Interlomas endurance race, which often boasts a large grid of modified production cars.

The Autódromo Interlomas is located in the town of Pillanlelbún, around 18 kms north of Temuco, the capital of the Araucania Region, in southern Chile. Araucanía International Airport is around half-an-hour's drive to the south of the circuit.

The circuit is located a short distance from Route 5. From Temuco, take Route 5 north to the Pillanlebún exit and then turn left, heading across the highway bridge towards Pumalel. Just after the bridge, turn right, onto the road that runs parallel to Route 5. Follow this road to the for short distance and turn right, just after the pedestrian bridge which crosses Route 5. Follow this road until you see the circuit entrance on the right.

From Santiago, take Route 5 south towards Temuco. At the Pillanlebún exit turn right and then immediately right again, onto the road which runs alongside Route 5, heading north. Follow this road to the for short distance and turn right, just after the pedestrian bridge which crosses Route 5. Follow this road until you see the circuit entrance on the right.

Find the best hotel and room deals near to Interlomas: