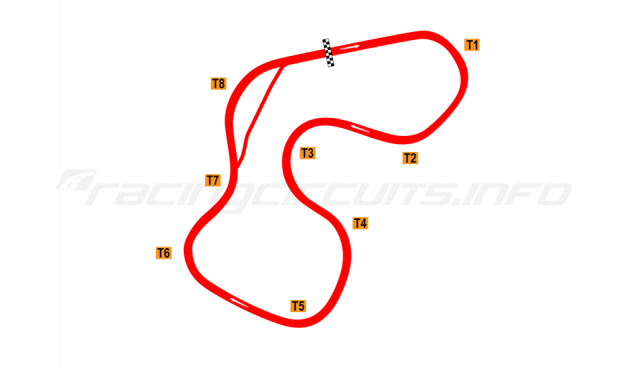 The Autódromo Vegas de Quilaco has provided racers in the south of Chile with a home for club events for half a century, fulfilling the need for speed in an area otherwise short of motorsport opportunities.

The circuit was the brainchild of Sergio Wagner Rosas, who in 1969 convinced engineers building the local IANSA sugar plant to provide machinery for local volunteers to carve out a dirt track near the city of La Unión.

From these humble beginnings the track flourished and in 1994 was finally paved with asphalt to create a permanent circuit.  The short and twisty 0.913 miles (1.470km) track boasts barely any straights, save for the short section by the start/finish line, which has a tendency to create frenetic racing.

The circuit is now more commonly known as the Autódromo Sergio Wagner Rosas in memory of its founder, who died in 2012.

In the past the circuit hosted a date of the national championship of Formula 3 and a 100 kilometers of Quilaco, endurance race, however the deteriorating track surface means that today little more than amateur club events are held.

The Autódromo Vegas de Quilaco is located close to La Unión in Región de los Ríos, Chile. The nearest major airport is Cañal Bajo Carlos Hott Siebert Airport at Osorno, around 40 minutes’ drive to the south, offering connections to Santiago, from where international connections may be made.

The track itself is located around 5km to the north of La Unión.  Head out of the city on T-60 and then continue onto T-712 until you reach the circuit gate on the right hand side of the road.

Find the best hotel and flight deals near to Autódromo Vegas de Quilaco: