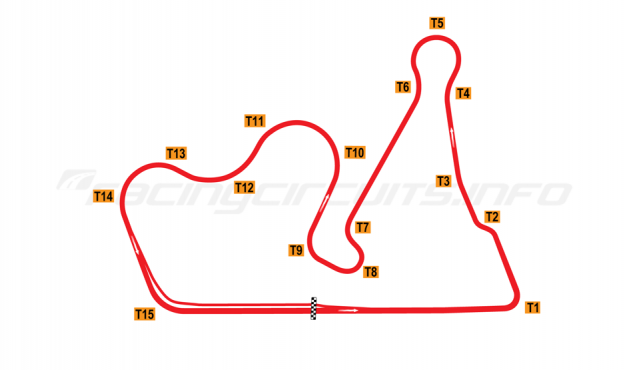 The Santa Cruz do Sul circuit is one of Brazil's most modern circuits and provides a fun and challenging layout but, as with much of the motorsport industry in the country, has been subject to fortunes which have waxed and waned.

The city of Santa Cruz do Sul is about 1,200 kilometres south of São Paulo in Brazil's southernmost state, Rio Grande do Sul, and has a population of nearly 80,000 inhabitants. Santa Cruz, Portuguese for holy cross, started as a German immigration centre in 1849 and today people speaking German can still be found in the area. As a result of its background. the city tends to be slightly different from many in Brazil and enjoys a cosmopolitan atmosphere.

Ground breaking on the 2.194 miles/3.531 km facility began in 2004. The layout featured a fast and flowing layout, complete with a long main straight that can also be used for drag racing events. Delays during construction meant that a scheduled September 2004 opening had to be postponed, but by June 2005 it was ready. The layout featured several blind crests and cambered corners, making it challenging and enjoyable to drive.

The inaugural meeting featured Formula Renault and Clio cars with some 20,000 crowding into the new facility to watch the racing. Larger series would soon follow. Brazil's top Stock Car series paid its first visit in October and the track would remain a fixture on the calendar through to 2011. Gradually, however, a rift began to emerge in the relationship with Stock Car Brasil's bosses and the local authorities charged with the upkeep of the facility. Requests for upgrades to safety and demands for a resurfacing to fix cracks which had emerged to the concrete grid area fell on deaf ears with the local mayor. The circuit was duly dropped from the Stock Car calendar, with the popular Formula Truck category soon following suit.

It looked like the circuit might be on a downward spiral towards obscurity, but a change in local leadership saw the new mayor promise investment in order to bring back the top categories. In 2013, repairs were made to the pit straight and drainage improvements were carried out around the track. At the same time, new tyre barriers were installed at key points and a new public/private partnership was established to run and maintain the facility in the future.

The improvements had the desired effect, with the return of Santa Cruz do Sul to Stock Car and Formula Truck. Ironically given the previous difficulties, the circuit was awarded a second 2014 event following the cancellation of the street race at Ribeirão Preto.

The Autódromo Internacional de Santa Cruz do Sul is located in the São José da Reserva district, approximately 10 miles south of the city. The nearest airport is Salgado Filho International Airport at Porto Alegre, which is a two hour drive to the east.

The circuit is located a short distance from the BR-471 highway, south of the city of Santa Cruz do Sul. Take the exit onto RS-412 and continue along this road until you reach the circuit, signposted on the right hand side.

Find the best hotel and flight deals near to Santa Cruz do Sul: