It's more than a little ironic that, at around the same time as Russia was busily building its new Winter Olympics-cum-F1 Tilkedrome at Sochi, authorities in Brazil were beginning the process to tear down one of their most successful circuits to make way for the new Olympic Park.

Today there is virtually no sign that motorsport ever had a part to play in Rio and the replacement venue much-promised by the politicians is equally invisible and unlikely to materialise.

While many people are familiar with the later circuit at Jacarepaguá which hosted F1, MotoGP and Champ Cars before its untimely demise, few remember the earlier incarnation, the Autódromo Nova Caledônia, which was located at the same spot. Built in 1965 and opened in 1967, this was a modern (for its time) facility, built on reclaimed marshland and featuring a twisty infield road course inside the confines of an oval-shaped outer circuit. Large grandstands at one end of the main straight overlooked the pit area and afforded views of the whole of the course.

Designed by Ayrton 'Lolô' Cornelson, who would go on to pen Estoril and Luanda's circuits in the next decade, the new circuit replaced a street course around the local area which had been used since the 1950s but which had become increasingly dangerous. Originally, the circuit was to be the centrepiece of a tourist complex with hotels, a yachting marina and even a casino. With volleyball, water skiing, fishing and sailing helping to bring in visitors and foreign currency year round when the track was not used for large events, the project hoped to be self sustaining.

Grand plans indeed, but after the track was built the state governor appropriated the surrounding land for the creation of a new neighbourhood, Barra da Tijuca, and the other facilities never materialised. The track hosted domestic racing for several years before ambitions turned towards international racing, with ambitions to host Formula One. New plans were laid for a completely new course to be created, more suitable for the top class machinery and all looked set for a bright new future.

The old course closed in 1970 and construction began on the new Jacarepaguá the following year. However, political instability was to intervene and the project became stalled, with the Grand Prix circus electing to host a non-championship race at Interlagos instead in 1972 and then full-blown events at the São Paulo track from the following year onwards..

It looked as though Jacarepaguá might have blown its chances but the project was resumed and the track was finally completed at the end of 1977. The circuit finally got its big break in January 1978, when it hosted the Brazilian Grand Prix for the first time. Argentina's Carlos Reutemann romped home to victory for Ferrari in a flag-you-flag performance from fourth off the grid, while there was something for the home fans to cheer as Emerson Fittipaldi guided his Fittipaldi-Ford home in second place.

The following year the race returned to Interlagos but increasing safety concerns at the venerable facility meant it was a short-lived switch. The increasing glamour of F1 felt more comfortable among the beautiful people of the Copacabana than among the increasingly obvious shanty towns surround the Interlagos course, so in 1981 F1 made what seemed like a permanent switch to Rio. The race soon established itself not only as the season opener but also a home for winter testing for many teams.

Carlos Reutemann took victory in 1981 - this time in a Williams - before a controversial 1982 race, at the height of the FISA-FOCA 'war', saw on-the-road winner and local hero Nelson Piquet disqualified for a technical infringement, along with second-placed Keke Rosberg. Alain Prost inherited the win for Renault, in what would be the first of five wins at the track. Other winners included Piquet the following year and in 1986, while the home hero had the additional honour of the entire facility being renamed the Autódromo Internacional Nelson Piquet following his third World Championship in 1987.

Nigel Mansell wound up a surprise winner on his Ferrari debut in 1989 in what turned out to be the last F1 event held at Jacarepaguá. São Paulo's mayor had wooed the F1 fraternity by expensively renovating a now-shortened Interlagos, ensuring Rio never got another look in.

CART 'roval' makes up for loss of F1

Of course, in the early 1990s, there appeared to be a new challenger to Formula One's dominance, thanks to the huge upsurge in popularity of the CART Champ Car series. With a clutch of Brazilian stars among its retinue, Jacarepaguá bosses sensed an opportunity to gain a new headline event.

Thanks to a gentleman's agreement between CART and the FIA that it would not host races outside of the USA on road courses, hosting a Brazilian Champ Car event was not going to a be simple affair. Determined to see it happen, the only option was to build an oval speedway in the grounds of the existing circuit.

And that's precisely what they did in 1995 - although this was not standard oval, being essentially trapezoid in shape and utilising only the back straight of the road course (which became the front straight of the oval - which due to its quirky shape was quickly dubbed a 'roval'. The new course also required modifications to the existing Grand Prix track, with a new section at the Carlos Pace curve and a rebuilt 180-degree curve leading onto the back straight.

Named the Emerson Fittipaldi Speedway, the oval hosted its first race in 1996, which - to the rapturous delight of the spectators - was won by Brazilian André Ribeiro. The first three events were run over 400 kilometers; the final two were 200 miles, with Paul Tracy, Greg Moore, Juan Pablo Montoya and Adrián Fernández the winners.

The circuit was tricky to drive thanks to the relatively slow corners at either end which required heavy braking - unusual for an oval. Mark Blundell discovered just how tricky in the first race when his brakes failed and he suffered a fearsome crash which left him sidelined for several races with concussion and broken foot.

Fittingly, the lap record on the speedway is held by Emerson's nephew, Christian Fittipaldi, who set a time of 38.565 seconds for a 174 mph average speed in 1999, a feat that was never beaten.

During the same period the Grand Prix course also received a new event worthy of its name, when it became host to the Brazilian round of MotoGP from 1995 to 2004. The first Rio Motorcycle Grand Prix was won by Italian Luca Cadalora, riding a Yamaha YZR500. Valentino Rossi won the most races, winning four from 2000–2003, while Australia's five-time World Champion Michael Doohan won the 1996 and 1997 races. Makota Tomada proved an unusual winner in the final race in 2004.

Decline and closure to make way for Olympic stadia

Thereafter, the circuit began a decline to its eventual demise. Rio's urban spread was one threat and soon the condos which sprang up in Barra da Tijuca had the property speculators circling. Ultimately, however, it was the city's desire to attract the Olympic Games which spelled the end. As a warm-up, Rio played host to the Pan-American Games and as early as 2005, land to the edge of the circuit was identified as the preferred location for a new indoor arena.

Construction began in 2006 and entailed the demolition of part of the oval and Grand Prix courses, rendering them unusable in their original form, leaving only the short course and southern portion of the oval usable. While there were initial plans to reinstate the longer road course by means of a part permanent, part temporary layout designed by Hermann Tilke this never came to pass - though Tilke went onto use the concept at Sochi.

Perhaps slightly surprisingly, the circuit rallied and the top national Stock Car Series resumed racing at Jacarepaguá in 2006, using a course that made use of the first two corners of the oval before diverting back onto the road course. The event proved ever-popular with the fans, even if by the time of the final event in 2012 several of the grandstands were in a state of disrepair as events wound down.

City politicians signalled the end in 2012 when the whole site was identified as the venue for a number of stadia for the 2016 Rio Olympics, with bulldozers moving swiftly in at season's end to raise the facility to the ground. So ended more than 40 years of history, with little in the way of sentiment shown for preserving any part of its memory. A promised replacement facility on a former military base in the Deodoro neighbourhood has so far failed to materialise. It seems unlikely now that it will ever be built, leaving Rio without a permanent circuit of any kind.

Nothing now remains at all of any of the circuits which once graced the waterfront at Jacarepaguá. All were demolished to make way for the Barra Olympic Park, which is at the heart of the 2016 Rio Olympic Games. The new 1.18 million square-metre Olympic Park played host to 16 Olympic sports and nine Paralympic sports and will became Brazil's Olympic Training Centre once the games ended. 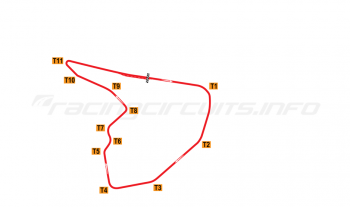 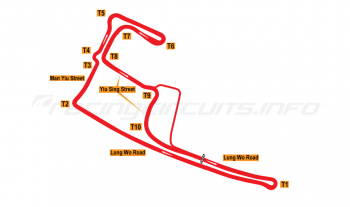 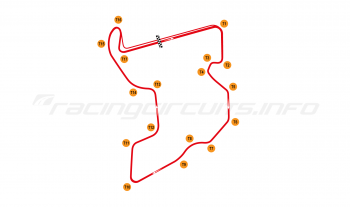