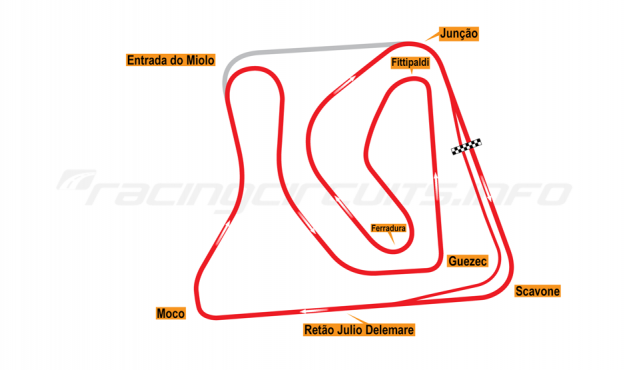 Brasília's Autódromo Internacional Nelson Piquet was born as a product of political ambition and home sporting success combining to provide the impetus for a modern racing circuit.

The early 1970s saw interest in motor sport in Brazil hit new heights, thanks the achievements of Emerson Fittipaldi. The country's president Emilio Medici saw an opportunity to use this popularity to good effect, using the sport as a platform to showcase the country and, more specifically, the new capital city. He hoped to show Brasília – only just into its second decade having been purpose-built in the centre of the country in 1960 – as a genuine rival for the economic and cultural centres of Sao Paulo and Rio de Janeiro. It would also act as a helpful distraction against his military dictatorship's reign of repression and censorship.

The only problem was that the city didn't have a circuit. Street races had been held during the 1960s, but a facility suitable for a grand prix would need to be purpose built. Thus plans were advance for a multi-million dollar sports complex, including the circuit, a football stadium and a gymnastics venue, near to the city's hotel zone. True to the rest of the buildings in Brasília, the new complex was designed in the modernist architectural style.

Construction began in 1972 and took two years to complete. The track's engineer Samuel Dias had created a technical layout which wound back and forth inside a roughly rectangular oval. The configuration, when viewed from above, was said to be based on a stylised rendition of a woman playing a harp.

The immodestly named Autodromo Emilio Medici lacked little in facilities for the age; modern pit and paddock facilities were complemented by grandstands which could cater for 11,500 spectators. Additional bleachers and spectator banks around the perimeter mean that a total capacity of 100,000 could be accommodated.

The track was inaugurated by a non-championship Grand Prix in February 1974. Emerson Fittipaldi had completed the negotiations with the government for the race to be held a week after the Brazilian Grand Prix at Interlagos. Named the Presidente Emilio Medici Grand Prix, the race attracted a disappointing 12 entries, with the Lotus, Ferrari, Shadow and Hill teams electing to skip the event and head home. Nevertheless, the grid boasted Fittipaldi in a his McLaren M23, Carlos Reutemann in a Brabham BT44, Jody Scheckter in a Tyrrell 006 and Carlos Pace in a Surtees TS16. Fittipaldi's brother Wilson lined up in a rented Brabham, while James Hunt had to make do with an outdated March instead of his usual Hesketh.

On race day, some 85,000 spectators showed up to watch what was, in truth, a disappointing race. Overtaking was very scarce, with drivers complaining that the abrasive track surface generated understeer and the go-kart like layout did little to aid racing. Fittipaldi was on good form, one week on from his Interlagos win, taking the lead when Reutemann slowed with an engine problem. He cruised to victory, followed home by Scheckter and, somewhat surprisingly, the ISO-Williams of Arturo Merzario.

Medici was on hand to present the trophy to the home hero in what was one of his final public engagements in office; six weeks later he had been replaced as leader by a hand-picked member of his own party.

The event was probably the highlight of the original circuit's existence, which was renamed the Autódromo Internacional de Brasília soon afterwards and thereafter largely only visited by national series.

The circuit's main problem is its location: Brasília was deliberately created in a central location, but its remoteness is its downfall. The more popular tourist destinations of Sao Paulo and Rio de Janeiro are more than 600 miles away and offer a more enticing – if slightly chaotic – atmosphere to Brasília's careful urban planning.

In 1995, NZ Empreendimentos, a company owned by another Brazilian motor sport icon, Nelson Piquet, was awared the lease for the track by the Federal Government. In the hope of attracting international racing once more, a refurbishment programme was begun. Gravel traps and tyre walls were installed around the circuit, as was a new perimeter wall. Lighting was installed around the exterior circuit to allow for night racing, while new buildings for local motorsport teams and a circuit restaurant was opened.

Piquet did briefly fulfil his dream; in 1996, the BPR GT Series organised a series of post-season 'temporada' races in Brazil at Curitiba and Brasília. To the delight of the local fans, the triple world champion teamed with Johnny Cecotto in a Bigazzi-run McLaren F1 GTR, taking wins in both races.

That, however, seemed to be it in terms of further international racing. The lease on the circuit was eventually returned to the Federal Government and the track settled into a life hosting the popular Sudam F3 series, truck racing and Stock Car Brasil, the latter making a feature of using the fast perimeter circuit.

All the while, the track surface and its facilities were becoming more and more outdated. In a bid to inject new life into the circuit, architects Ridge and Partners, working alongside Apex Circuit Design, were commissioned to create a feasibility report into the remodelling of the existing race track and provision of new pit facilities and grandstands to meet modern safety standards . The aim of the design was to provide a Category 1 circuit capable of hosting Formula 1 and other events whilst maintaining the characteristics of challenging corners with good overtaking potential, very smooth asphalt and good drainage.

The plans were presented in 2007 and sparked some interest, though were ultimately never enacted. The circuit's facilities continued to deteriorate, but by 2013 a minor refurbishment programme was undertaken. This included the enlarging of some gravel traps and replacement curbing at turns 1 and 4. Unfortunately, when the Stock Car Brasil series arrived, it found the work had been done to poor standards; concrete kerbing began to crumble and, worse still, poorly placed drainage covers came loose. After many delays, the races finally went ahead but were not without incident; a crash at the final turn saw Diego Nunes lucky to escape injury when his car ripped apart with contact against the tyre barriers. Worse was to come the following month when motorcycle racer Vanessa Daya died following a crash at the circuit.

The events prompted the Brazilian auto federation to suspend car racing at the circuit until the problems were resolved, followed swiftly by Brazil's motorcycling governing body. The latter ban was subsequently lifted when it was determined the track condition had no part in Daya's crash. By the time Stock Cars and F3 drivers arrived in November, remedial works had been undertaken on the problem areas, though there were still issues with the kerbing, illustrated when F3 racer Raphael Raucci took off after running wide and hitting a concrete hump placed at the end of runoff area. The hump was later lowered and no further problems encountered

Against this unsettling background a deal was finally struck with MotoGP organisers Dorna for top class bike racing to return to Brazil at a heavily revised Brasília circuit. New plans were drawn up by Terracap, the government agency responsible for the construction and maintenance of the city of Brasília. These called for a totally rebuilt track, following a similar design to the Apex proposals, but with an addditional section near to the Estádio Nacional football stadium. This in turn wold have created a 1km long main straight.

Construction work on the new circuit had been due to start in March 2014 and was scheduled be completed in just five months; but unfortunately ambition was overcome by reality and when funding was not forthcoming, the project was abandoned. Dorna announced in Februray 2014 that it would not be travelling to Brazil and a hiatus ensued.

Seeking an alternative series around which to continue reconstruction plans, the Governor of Brasília began negotiations with the Indycar Series, which was looking to restablish a Brazilian round following the end of its Rio event in 2013. In September 2014, series bosses confirmed that the circuit would be included on the 2015 calendar and, after a hiccup over tender contracts, work finally began on reconstruction at the end of November.

The new design by Terracap called for the re-siting of the main pit and paddock on the area formerly occupied by the kart circuit. The drive-in cinema which sits behind it (surely a unique feature in all of motorsport) was also set to be refurbished. Revisions to all of the external corners to create much greater run-off were also planned, while the old start/finish straight was to be slightly realigned to move it further infield.

As ever with Brasília, even then things were not straightforward. Courts had already questioned the expenditure, finding R$ 34.8 million of agency overpricing and criticising duplication of spending within the budget, as well as finding other issues with the design plans. In January 2015, Novacap withdrew the orginal tender and instead work on a scaled back programme of renovations commenced. Under the new plans the pit lane would remain in its original location, with changes to the Scavone and Moca corners to increase run off. The Entrada do Miolo was also to be completely rebuilt and moved infield. A new overtaking point would be created via modifications to section between Turns 11 and Junção, resulting in a new short straight and a 90 degree bend. Around 70,000 tyres were expected to be used to create new safety barriers. In preparation, the existing pit building was demolished and work began around the course to complete any changes not already started in December.

Then came the bombshell towards the end of the January 2015, when Terracap unilaterally informed the race promoters that the Indycar event was cancelled. The new Governor, Rodrigo Rollemberg, cited a financial crisis for the Federal District, which had seen some public workers left unpaid and other expensive projects abandoned, such as the hosting of the 2019 student Olympics. Against such a background, completing the circuit refurbishment was seen as untenable.

Work on site halted the next day leaving the track in a state of disrepair. With some of the track surface incomplete, safety barriers no longer in place and no pit facilities at all, it's unclear whether the Brasília circuit is now effectively closed for good. Only time will tell – and in this city of politics, absolutely nothing can be taken as a formailty.

The Autódromo Internacional Nelson Piquet is located in Brasília in central Brazil.  The nearest international airport is Brasília International, approximately 10 miles or a 20 minute drive away.

The circuit is located in the northwestern sporting sector of the city and is easily accessible by road and public transport from all parts of the city.  Any easy landmark to help find the circuit is Brasilia's Estádio Nacional football stadium, which is immediately adjacent to the circuit.