The Autódromo Regional Eusebio Marcilla at Junín is a relatively new circuit, built to host the Turismo Carretera series in 2011 - but with a motorsport history stretching back much further to some of the early days of the category.

Junín had hosted road races in the 1950s and '60s before creating its small permanent circuit, named in honour of local racing legend Eusebio Marcilla in the 1970s.  But it was on a semi-permanent road course that the Turismo Carretera returned to through the 1980s and early 1990s, before the gradual elimination of these road racing stages.  Finally, in 2011, a brand new course was created in order to host the category once again, with the complete redevelopment of the autodrome.

Perhaps surprisingly given its enthusiasm to rebuild the facility, Turismo Carretera has not returned since 2014, while the Top Race V6 and Super TC 2000 categories last raced here in 2015, menaing that today the track hosts local racing only.

The story or racing in Junín begins on April 22, 1946, when a group of enthusiasts gathered at the Bar Munich and agreed to form the Moto Club Junín. Eusebio Marcilla was selected as interim president until July, when the club elected engineer Horacio Cavadini to lead it. Within months, plans began to be made to create a circuit.

During 1947 the club worked steadily to craft the course, which was located on the same spot as the current circuit but featured a compacted earth circuit. Named the Autodromo Mayor Arrieta after the town's mayor, it opened on August 24 and helped develop a strong local racing scene.

The club, meanwhile had its sights set on organising a race of the Turismo Carretera, which paid its first visit in 1952. Given the road racing origins of the TC series, it was no surprise that the Vuelta de Junín did not use the track itself, instead incorporating a longer loop of public roads around the area. Held in July, the race was won by none other than Eusebio Marcilla, helping to cement his place in the history of racing in the area.

Further road races were held in 1958 (won by the great Juan Gálvez) and yearly from 1962. The 1962 race was notable for a serious accident which claimed the life of three spectators and driver Jorge Farabolini, whose car clipped a bank and overturned into the crowd. After 1967, the Turismo Carretera elected to go elsewhere and would be absent from the Junín area for more than a decade.

In the absence of the top class, the club went to work revamping its permanent circuit, installing an asphalt surface for the first time. In its new 1.766 km form it re-opened on June 3, 1971, now named in honour of Eusebio Marcilla. Its first race - a round of the Argentine Formula 4 series - was won by Carlos Ragno. Plans were in place for a much extended course, though these were never realised beyond some initial ground clearance.

The circuit would remain a club racing venue throughout its life, its length and facilities being inadequate for anything much more substantial. By the 1980s, the TC series had returned on a new 'El Panorámico' closed-road course, rather overshadowing the permanent course. From 1983 annually the top-class cars visited to huge crowds but the gradual shift towards permanent circuits following a number of serious accidents on the fast public road courses meant that 1992 would be the street course's last hurrah.

That seemed to be that for racing in Junín, as by this stage the Eusebio Marcilla lay largely dormant. Formula 4 had ceased visiting in the mid-1980s, with only smaller regional races being held into the 1990s after which other sporting activities seemed to hold more prominence, with courts for various different disciplines built and the wider area being used for camping.

However, the ACTC - organisers of the top series - clearly hankered after a return. So much so, in fact, that they commissioned the same company which has rebuilt its own headquarters in the Federal Capital to completely redevelop the Junín course. Work began in 2009, when the old course was completely ripped up and a new facility created - much longer than before and, to some degree, sharing the footprint of the never-developed 1970s long course plans.

In 2011, the new Autódromo Regional Eusebio Marcilla opened, with the return of Turismo Carretera on August 5-7. The inaugural champion on the new course was Ford driver Guido Falaschi, the one and only victory of his career which was tragically cut short later that year when he was killed at Balcarce.

Other categories have also visited Junín in its new guise; Super TC 2000 visited in 2011 and 2015, with José María López taking victory at the first event, prior to his rise to super-stardom in the WTCC. The Top Race V6 series was also a regular visitor from 2012 to 2015.

The track surface underwent refurbishment in March 2016 in order to remove a number of bumps ahead of the racing season.

Planning a visit to Junín? Find the best deals near to the circuit on hotels, apartments and rooms to rent from the map below.

The Autódromo Regional Eusebio Marcilla is located on the edge of the Laguna de Gómez Natural Park, a few miles south of the city of Junín in Buenos Aires Province, Argentina. The nearest airport is at Rosario, around three hours' drive to the north, offering a range of international and domestic flights. Ezeiza International Airport in Buenos Aires is a similar distance away, taking around 3h15m to reach from the circuit.

By car the circuit is located to the south of the city, a short distance from RN7. From the highway, take the road towards the Laguna de Gómez Natural Park (signposted for Balneario) and the circuit entrance will be on the right hand side shortly before arriving at the park. 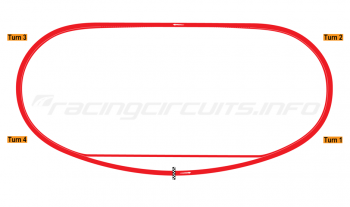 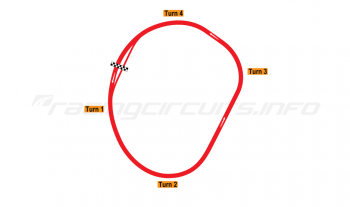 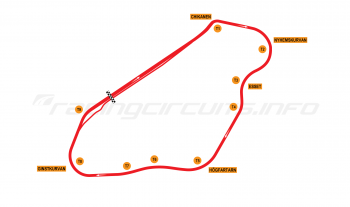