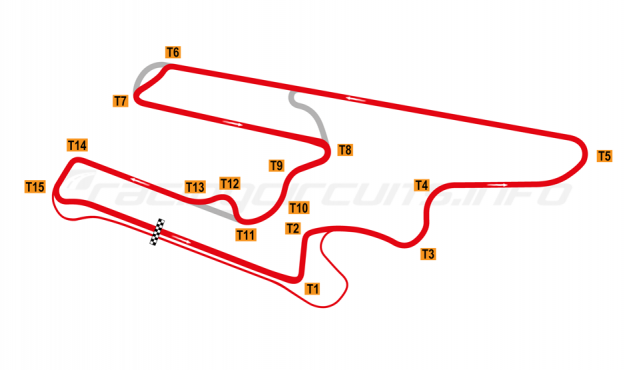 The Autódromo "El Villicum" is the latest of a new crop of circuits in Argentina, designed to bring top level national and international racing back to San Juan Province for the first time since the El Zonda circuit fell out of favour on safety grounds.

Located near the city of Albardón, the new circuit is alongside the symbolic Route 40, a 5,000km road which stretches from the north to the south of Argentina, along the breathtaking Andes. Route 40 is a tourist attraction not only for motorsport fans, but for all travellers who go to discover the best landscapes in the country.

and is set to host a round of the World Superbike Championships after signing a deal with organisers Dorna, as well the popular local Turismo Carretera series.

First announced by the Government of San Juan back in 2015, the 170 million Peso project has seen numerous design iterations, with input from the FIM resulting in the final layout, penned by Argentine architect Leonardo Stella. The 2.657 miles /  4.276 km track boasts 19 corners - 11 left and 8 right - as well as permanent grandstand seating for up to 10,000. Homologated to FIM Grade A and FIA Grade 2 standards, the circuits also boasts an impressive pitlane building with up to 64 garages, while there are also plans for an on site hotel.

Work began in October 2016 and progressed through 2017, with its official opening coming on October 14, 2018, featuring the World Superbike and World Supersport series on the opening weekend.  Jonathan Rea took two victories for Kawasaki in the World Superbikes, while Jules Cluzel won the Supersport race.  Later in the year, the Turismo Carretera and the TC Pista also made their first appearances.

In August 2019, the first modifications were made to the course at the suggestion of the Turismo Carretera drivers.  A short new section of straight was added between Turn 12 and Turn 14, effectively by passing Turn 13 altogether.  The change raises the speed of Turn 12 and allows for a straight run down to the final two curves. Lap times were expected to drop by around 5 seconds, while the changes to fuel consumption this will bring should open up new strategic options for the races.

The Autódromo El Villicum is located at Albardón, around 20 km to the north of the city of San Juan in San Juan Province, Argentina. Domingo Faustino Sarmiento Airport is the closest, to the east of San Juan city, with domestic connections to the main international hubs across Argentina.

The circuit is located directly alongside Route 40 to the north of Albardón, next to an industrial/techno park.

Find the best hotel and room deals near to El Villicum: