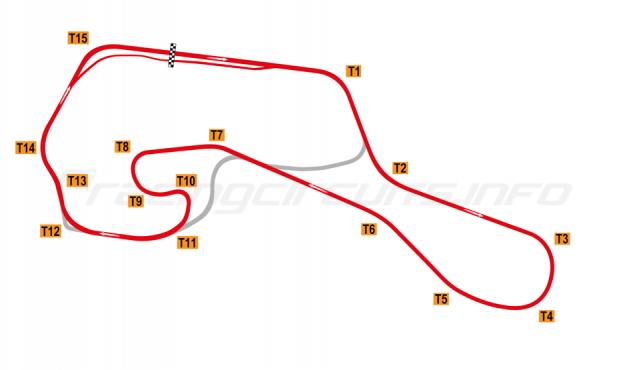 Comodoro Rivadavia's Autódromo General San Martín is a fast and often wind-swept facility next to the Atlantic ocean in southern Argentina, where the sudden gusts, temperature changes and often-reduced visibility provide a major challenge to all competitors.

As with so many of the Argentina's permanent circuits, the facility can trace its connection to motorsport back to the road races of the Turismo Carretera (TC) series, arranged on public roads in and around the city at a variety of locations. For years the events at Comodoro Rivadavia were the southernmost stops on the calendar but nonetheless popular for it, in a city whose fortunes are partly derived from the export of petroleum.

By the mid 1960s, a short road course around the industrial district was being used for the TC races, but this did not meet the growing demands of the sport, being both too narrow and too short to accommodate the numbers of cars which the races now attracted. The Auto Moto Club of Comodoro Rivadavia realised something more permanent was needed.

In 1966, the club began construction of its first such facility on land in the city's southern outskirts. Located on the same spot as the current course, the first track featured a dirt surface and would play host to racing for several years, helping develop the local motorsport scene even further.

Keen to build further upon this enthusiasm - as well as reacting to the move that was increasingly being made by the TC series and others towards only competing on purpose-built asphalt courses - the club began the process of asphalting the course in spring of 1969. Under the supervision of president Raúl Andrés Vilariño, club members undertook much of the work and by November had completed their initial task, completing the new ribbon of asphalt.

Visiting journalists were left impressed by the 3.764 km course - even if it was still far from being finished. The track largely followed the layout of the dirt course, save for the inclusion of a new series of esses which were quickly nicknamed the 'Viborita' (Little Snake). Run in the more traditional clockwise direction, consensus was that the layout would prove very fast.

By December 14, the track was ready for its first event, the final round of that year's TC championship. A huge crowd was on hand to watch the Grand Prix Nuevas Naftas, backed by the national oil giants YPF. Luis Rubén Di Palma took his only win of the year in a Torino.

Despite the success, the TC competitors elected to go elsewhere the following year, so it was the local Formula One series which had top billing in 1970. Di Palma was nonethless among the small entry and probably felt a sense of continuity as he took pole in his Berta-Tornado. He was less fortunate in the races, crashing out in both heats, leaving the overall victory to Ángel Monguzzi in his Chevrolet powered Trueno Sprint.

The Formula One cars visited again in 1972, '73 and '74, after which it was a long wait until a national series of note headed south. The track did however continue to thrive, with a host of regional Patagonian series flourishing.

The popular TC 2000 paid its first visit in 1991, but it wasn't until 2004 that Comodoro Rivadavia would see a significant return to national prominence. That year saw the TC category begin a four-season run of events, while Top Race V6 arrived in 2005 and the track added TC2000 once again in 2006.

The first significant alterations to the track layout also arrived in 2006, with the completion of an extension which bypassed the 'Viborita' curves, creating a slower new complex in the process. This new section of track was soon adopted by the majority of the championships visiting the track, who also soon began favouring the shorter 1.926-mile version of the course, cutting out the loop towards the ocean.

Sadly, the 2007 TC event would see a horrific multi-car accident which claimed the life of driver Guillermo Castellanos. It was the second fatal accident that year and proved the final catalyst for the category to hasten the end its traditional practice of having co-drivers, with the practice banned for the following year. The TC series also departed for several years, returning only in 2013 and 2015, the latter event being won by "Josito" Di Palma, grandson of the track's inaugural race winner.

A revised, tighter alternative layout was introduced at the peri-penultimate corner in 2012, though it appears to have been completely ignored for all racing events, with the major two and four-wheeled categories preferring the original, faster, variant.

The Autódromo General San Martín is located in the city of Comodorio Rivadavia in Chubut Province, southern Argentina. General Enrique Mosconi International Airport on the northern side of the city but can be reached in around 40 minutes.

The track itself is located alongside Ruta Nacional 3, next to the small airfield operated by the Aeroclub Comodoro Rivadavia. RN3 is a dual carriageway and unfortunately there is no way to cross the central reservation when heading southbound, so traffic wanting to gain access to the circuit must continue onwards until the next roundabout and double back.

Find the best hotel and flight deals near to Comodoro Rivadavia: