Dubbed 'The Mickyard', Walt Disney World Speedway was a relatively short-lived oval speedway based on the grounds of the famous entertainment resort complex in Bay Lake, Florida.

Built to host the Indy Racing League, it hosted the first ever race of the breakaway series in 1996 but only held events for four more years before ceasing its motorsport activities and eventually being ploughed under when the Disney authorities had other plans for the land.

The circuit was quick in gestation, with initial scoping taking place in 1994 before final plans were announced the following January by IMS Events, Inc., a subsidiary of the Indianapolis Motor Speedway Corporation, as it looked for a suitable Florida-based facility to host its newly formed single-seater series.

Located on a triangular plot of land adjacent to the Magic Kingdom's parking lot near Disney's Polynesian Resort, the tri-oval design was attributed to Indianapolis Motor Speedway chief engineer Kevin Forbes. The whole complex was designed to fit within the existing road network and Disney World infrastructure in order to cause as little disruption to the resort's guests as possible.

Construction began on June 27, 1995, when Indianapolis Motor Speedway Chairman of the Board Mari Hulman George took part in a groundbreaking ceremony, presenting the track with one of the original paving bricks from the famous "Brickyard". Despite the wettest summer period on record in the Orlando area, construction was completed on time, with final paving finished by October.

The resulting track was a slightly curious one mile tri-oval, with the straight leading into Turn 2 requiring a gentle kink in order to fit within the confines of the site. It would prove a difficult circuit to set up for as each turn had different levels of banking, requiring a compromise to find speed and stability. Turn 1 was the steepest at 10 degrees, Turn 2 was slightly shallower at 8.5 degrees and Turn 3 the shallowest of all at 7 degrees.

Another unusual feature - which no doubt aided the quick construction - was the absence of permanent amenities. The track itself was fully-formed but there were no pit buildings, grandstands or even toilets; the idea was that, much like a street circuit, these would be brought on site for events and dismantled shortly after. This was partly to meet a stipulation from the Disney Corporation that racing would only happen each January, in order to help boost visitors at a quieter time of year.

The upside of this design was that it was also one of the most affordable new ovals ever built. Exact figures were never revealed, but a figure of $6 million has been widely reported and seems to be near the mark. The downside would become apparent in subsequent years, however: temporary bleachers and restroom facilities would be erected each year from November in preparation for the race in January, eating up valuable parking lot space right over the busy festive season. This is probably the major reason the circuit's racing life proved so short-lived.

The track was dedicated on November 28, 1995 with a special ceremony involving some of the bigger names from the nascent Indy Racing League. Arie Luyendyk, Eddie Cheever, Eliseo Salazar, Lyn St. James and Davey Hamilton drove a five-car "Flying V" formation amidst fireworks and fanfare as part of a series of test days at the new facility which ran through to December.

The first actual race was a Formula Ford 2000 support race on January 26, 1996 followed the next day with the Indy Racing League's Indy 200 car race. This featured a slightly rag-tag entry list of some of the smaller Indycar teams bolstered by new entrants, while the driver list was similarly of variable (and sometimes questionable) quality. Some time Indy Lights racer Buzz Calkins won out the first running en route to a shared championship victory with Scott Sharp.  The lack of star names didn't put off the crowds; an attendance figure of over 50,000 was later announced, many of whom Disney executives said had come from the Mid-West as part of packages to stay at the main resort.

The following year's race was shortened by monsoon-like conditions, leaving Eddie Cheever as the winner. The final three races were won by Tony Stewart, Cheever again, and Robbie Buhl. A couple of NASCAR Craftsman Truck Series races were held in 1997 and 1998, as well as some USAC Silver Crown and Formula Ford races.

And then that was that, at least as far as racing was concerned. The January fixtures were always problematic; too soon after the previous season ended and too long before the next race on the schedule, it proved an irritant and interruption to pre-season testing for teams. Equally, the disruption of making the circuit race-ready each year proved a source of annoyance for park bosses, so it was to no-one's great surprise that the race was quietly dropped in 2001 when no suitable date could be agreed. It was with even less surprise that this marked the end of professional racing permanently.

Outside of racing, the venue continued to be available for testing, helped by the reliable good weather during the off-season, including in 2002 when the first test of the new Infiniti Pro Series was conducted at the track. The major activity however, came in the form of the Richard Petty Driving Experience which, having first operated since 1997 in the off-season only, began year-round activities from the circuit, giving the public the chance to drive real NASCAR machines around the oval or ride along with a professional driver. In 2008, they were joined by the similar Indy Racing Experience.

From 2012, Petty opened a new driving experience was launched, called the Exotic Driving Experience, allowing customers to drive Ferraris, Audi R8s or other supercars on the track. To accommodate this, modifications were made to the speedway's infield to create an "Exotics Course", which was a one-mile layout running clockwise around part of the oval.

This operated for three years before Disney executives swung the axe and nixed the whole facility, preferring instead to make 'transportation improvements', which translated as an extension of the Magic Kingdom's parking lot.

Disney World Speedway was located at the famous resort park in Bay Lake, near Orlando, Florida.  It was located to the immediate south of the main car park for the Magic Kingdom, off Floridian Way.

Few clues now remain that the track was ever there, though the distinctive Mickey Mouse-shaped lake in the infield, built to help with drainage in the early years of the facility, remains as a visible reminder that this was once slightly more than just scrub land. 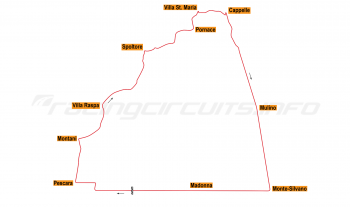 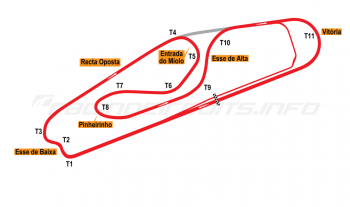 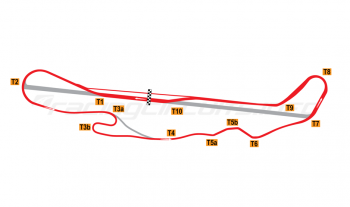