Thunderhill Raceway Park proves that new tracks needn't be boring and antiseptic in the modern age. Built for racers by racers, the circuit has recently been extended to form the USA's longest permanent road course, with a thrilling combination of turns that have earned it the deserved nickname of the 'Thunderschleife'.

The circuit has been under constant expansion since opening in 1993, adding track surfaces, garages, buildings, asphalt pads and more. “This is a work in progress” notes CEO David Vodden who says that “Thunderhill Park is far from done”. The track was built to ensure that the SCCA would always have a track to use and with three distinct variations of the road course now on offer, plus motocross and rallycross tracks, that's proven to be the case.  Busy, however, is the track's watchword, with around 1,000 events per year taking place (many of them simultaneously).

Major racing events each year include the now famous 25 Hours of Thunderhill, organised by the National Auto Sport Association, plus a round of the LeMons series for cars prepped for $500 or less.

Planning for the raceway near Willows in northern California began in the mid 1980s, after the San Francisco Region of the Sports Car Club of America (SCCA) became increasingly dissatisfied with its treatment by local tracks, Sears Point and Laguna Seca, particularly over securing race dates. With Riverside also set to close, the brave decision was taken to build a new track to solve the problem.

California's strict environmental laws seemingly made this an almost impossible venture, but the SCCA branch formed a committee and set about finding land and a local community that would welcome them. Their first attempt, on land near La Grange, came to naught when local opposition led to a unanimous rejection by local planners. Undeterred, the committee began the search for a new site and brought in former sprint car racer David Vodden to help manage the project.

Soon a new plot was identified – on farmland outside of Willows – and this time the local community seemed to be supportive of the scheme. As at La Grand, Steve Crawford drew up plans for a road course, making use of topography to create a challenging layout which included a corner reminiscent of the fabled Corkscrew at Laguna Seca, known at Thunderhill as 'The Cyclone'. This time the plans were approved without objection and construction could finally began. Shortly after New Year in 1993, a team including Art Siri – who had built the original Sears Point course – began work on the 1.9 mile layout.

Part way through the construction, Voddon realised that the funding was only sufficient to build a 1.3 mile course, so the group began searching for more backing. A loan from the national office of the SCCA, other individuals and a $50,000 donation from the Shelby Club allowed construction to be completed on the full 1.9 miles by September 1993. As a thank you, the Shelby Club was among the first to lap the new course at a special preview, albeit without laps turned in anger. The grand opening itself took place on Halloween, with a three day SCCA event, attended by actor and noted sportscar racer Craig T. Nelson (who also competed). The event drew some 15,000 spectators, which remains a track record.

Business thrives and the circuit extends

Thunderhill Raceway Park settled into becoming a favoured home for Californian club racing and the business began to thrive. Motorcycle racing soon began using the track as well, it becoming a regular haunt of the American Federation of Motorcyclists. A popular addition was the development of 'Street School' days, which allowed the public to experience the track (often in their own cars) for high performance driver training on days that would otherwise have gone unrented. The school eventually became the popular 'Hooked on Driving' business which operates at tracks all across the USA.

By the end of the first full year, the circuit's accounts were firmly in the black and the green light was given to extend the circuit to just under three miles. Steve Crawford had always envisaged the track eventually being completed to this length, so detailed plans already existed. With minor modifications, the new west extension was duly completed over the winter and was ready for action during the 1995 season. The extension also opened up new opportunities for revenue generation as it meant the track could be split in two, with east and west variants able to operate simultaneously.

Thus the classic Thunderhill full course was born and would become by far and away the most used version by the racing community. As well as SCCA and AFM events, the new National Auto Sport Association began operating events at Thunderhill, including an endurance race which began in 1998 as a 12 hour race but soon was extended to 25 hours, making it the longest such event in the world for a number of years. Today, it is the track's signature event, attracting entrants from around the world.

Aside from minor modifications to the pit lane entrance, there were no further course alterations until 2014, when an idea first hatched some years before by David Ray, CEO of Hooked on Driving, came to fruition. Over a rocky ridge from the main course lay some 200 acres which until then were just used by the neighbouring farmer for grazing. Learning that the land to the west of the circuit was owned by the San Francisco SCCA, Ray pondered whether a new west course might make economic sense.

Sharing his idea with David Vodden, the pair walked the plot and could see that the natural contours lent themselves to a road course. Contacting Steve Crawford to assess the feasibility, by 2008 plans began to snowball and soon a 2 mile course emerged on paper. But while the board of the track was supportive, it was clear that a recession was around the corner and that it was not a wise time to develop. Fast forward to 2014, however, and with an improving economy and healthy cash reserves having been built up, approval was given to proceed with the development, albeit in modified form. By blasting through the rocky outcrop, the two courses could also be joined together to form the largest course in America.

Construction began in August 2013 and progressed through the first half of 2014. In June, the track was ready for operation, with a grand opening featuring the 150 racers of the Thunderhill Track Championship. When combined, the two courses stretch for nearly five miles through 27 undulating turns, creating a demanding but fun course to drive, probably as close to the legendary Nordschleife as you will likely get in a modern track (and with better weather to boot!). The added length proved a bonus during the September LeMons race for sub-$500 budget racers, when a world record 216 cars took the start for a gruelling 15 hour race.

With its new course doubling the amount of rentable days, plus the increased draw the 'Thunderschleife' gives, it looks likely the Thunderhill Raceway Park will continue to deliver a racer's paradise for many years to come.

Planning a visit to Thunderhill Raceway Park? Find the best deals near to the circuit on hotels, apartments and rooms to rent from the map below.

Thunderhill Raceway Park is located near the city of Willows in Northern California, USA. The nearest international airport is Sacramento International Airport, around an 80 minute drive south.

If you are travelling north from Sacramento or the Bay Area, take Interstate 5 North to the main Willows exit. Turn left over the freeway and head west for seven miles along SR-162 to the track entrance on the right. If you are travelling south on Interstate 5 from Northern California or Oregon, the track is located one hour south of Redding. Again take the main Willows exit, turn right and go west for seven miles until you reach the track entrance on the right. 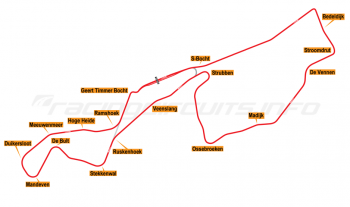 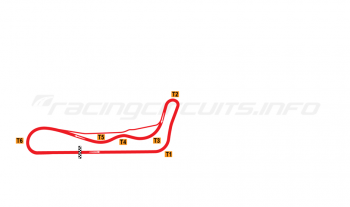 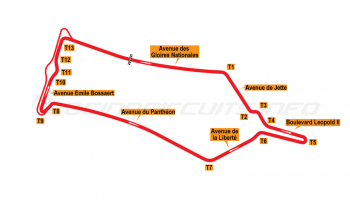