Florida may not be the immediately obvious location for a successful motorsport centre based around the art of rallying, given the relative lack of popularity for the sport in the USA. However, the Florida International Rally and Motorsport Park (better known more simply as The FIRM) has grown to incorporate tracks and trails for almost every driving style, including a 1.6 mile road course. It is no surprise that it has come to be regarded as one of the premier facilities of its kind in North America.

Set in 420 acres of sand, pine forest and scrub wood around eight miles south of Starke, near the city of Keystone Heights, The FIRM takes up a portion of what was once a United States Army Air Forces base. Constructed in 1942 the base was initially named as Crystal Lake Army Airfield but when commissioned in December of that same year it became known as the Keystone Army Airfield. It was home to the AAFSAT Strategic Reconnaissance School and saw use during World War II for training and tactical combat simulation.

In 1947 the facility was turned over to the City of Keystone Heights for general private aviation and continues to this day using two of the three original runways for everything from light aircraft to helicopters, gliders and even aerobatic display teams. It also remains popular with the military, who continue to use the airfield for parachute training and recurrence training, night vision approaches, equipment drops and mobilisation.

It was perhaps this strong military connection which explains the success of the motorsport facilities on the site. Utilising land on the north-west of the site, in 1998 British rally driver Ivor Wigham set up the European Rally School, creating around 7 miles of trails in the wooded area adjacent to one of the airfield's disused original runways. It soon became popular, none more so than with military chiefs, who seized the opportunity to use the facility for driver training for soldiers heading into combat.

"The rally driver is the most complete driver you can find," Wigham explained at the time. "He can drive on all surfaces, in all kinds of conditions, in all vehicles — and that's just what the military wants."

In those early years, military use of the rally courses accounted for almost half of revenue but soon the facility would expand, first with the off-road courses extended to provide more than 20 miles of trails in a variety of configurations, then a kart circuit was added in the early 2000s.

In 2008 a $2 million investment was made by Wigham to add a 1.6 mile road course, utilising part of the runway and some of the existing trail roads. This featured 10 turns, including a lightly banked double-apex curve leading onto the main straight, a set of 'esses' along the old runway and an optional four-turn 'shoebox' section. It all adds up to a high-technical but rewarding lap, regardless of vehicle.

The circuit can be split into separate East and West loops which can be run simultaneously and also connects into the other courses around the facility. It's not particularly unusual to find yourself lapping the road course while military personnel zip around on ATVs nearby as a consequence. The active airfield alongside the track's perimeter also adds an extra buzz of noise and excitement, particularly when the aerobatic display teams are practising in the background!

Wigham's involvement in the facility ended in 2012 when he sold out to investment firm The Strategic Group of Gainesville, Florida. It followed several years of on-off talks before a deal was concluded. One of the first acts of TSG's ownership was to change the name, dropping the European Rally School moniker and adopting The FIRM in its place as a better reflection of the various activities which now took place.

Since then, there has been continued growth. The FIRM is home to the Rally Pro Performance Driving School, the International Security Academy (which trains elite troops in high-speed, high-risk performance driving, ATV/LTV, SUV and off-road vehicle dynamics) and a 360 degree firing range.

The FIRM rents their tracks to race teams, hosts regular open track days and provides the perfect venue for corporate events. It has also become a filming favourite venue among Disney, Fox and car show programs.

Planning a visit to The FIRM? Find the best deals near to the circuit on hotels, apartments and rooms to rent from the map below.

Florida International Rally & Motorsport Park is located in Starke, Florida, USA. The track sits alongside Keystone Heights Airport, which caters for general private aviation, while international airports can be found at Jacksonville, an hour to the north of the circuit and Orlando, two hours drive to the south. Gainesville Regional Airport also has a variety of scheduled domestic flights and is 30 minutes to the south west of the circuit.

The track is located on FL-100E, within the grounds of Keystone Heights Airport. From Gainesville, head north on State Road 24 to Waldo, then join US 301 North until you reach the exit for County Road 221 to Hampton. Pass through the town on County Road 18 until you reach the intersection with FL-100 and turn right. The entrance to Keystone Heights Airport is a short distance away to the left from where you can follow the signs to the entrance of the FIRM, also to your left.

From Jacksonville you'll need to take I-10 West to exit 343, signposted for Baldwin and Stark. Head south on US 301 but beware that speed limits along this stretch can change quickly from 65mph down to 30mph and are strictly enforced by local police. Head into Starke and then take Fl-100 E until you reach the entrance of Keystone Heights Airport and follow the directions as above. 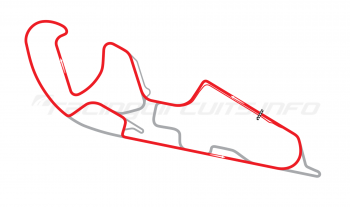 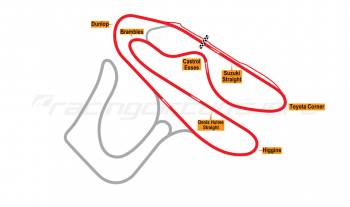 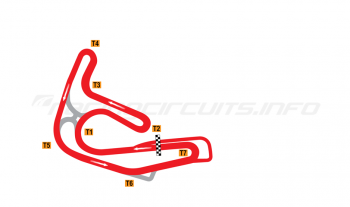