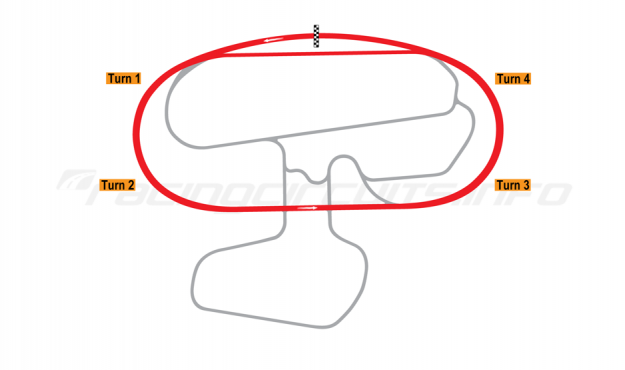 Texas World Speedway was the sixth superspeedway built in the USA but was always something of a poor cousin compared to Daytona, Indianapolis, Taladega, Pocono and Michigan. All the ingredients were there – good facilities, the big urban populations of Austin and Houston in driving range and the fastest speeds anywhere – yet somehow the circuit never quite took off as intended.

The man behind its creation  -American Raceways Incorporated founder Larry LoPatin - certainly was not shy of dreaming big. He saw Texas World Speedway as a logical continuation of his new network of racing circuits stretching across Amercia. Michigan International Speedway formed the template for the new course at College Station; the D-shaped oval is often considered its sister track. Like Michigan, TWS would feature a road course which burst out of the confines of the oval into the land beyond, with multiple different configurations.

LoPatin viewed TWS as having the potential to be one of the premier venues in motorsport, an Indianapolis of the south, if you will. To that end, speed was to be a key factor and LoPatin wanted TWS to be among the fastest on earth. While sharing Michigan's outline and length (2.0 miles), TWS featured steeper banking through the turns (22 degrees) and shallower on the back stretch (two degrees) and the same 12 degree front stretch paving angle. The results were spectacular; numerous closed course speed records were set here in subsequent years as the design lived up to its objectives.

At first, everything looked promising for the circuit's future. Completed in 1968, the first sanctioned races occurred the following year, with the highlight undoubtedly being the circuit's staging of the coveted finale of the NASCAR season, the Texas 500. Everything pointed to the event being a success – however, fortunes changed quickly. At the inaugural Talladega 500 earlier in the year, the Professional Driver Association led by Richard Petty mounted a boycott after complaining of a lack of grip on the new track. NASCAR boss Bill France Sr. was unamused and promptly replaced the striking drivers with others from the undercard. He was even less amused when LoPatin came out publicly in support of the striking drivers.

Some would say that upsetting the boss of the major sanctioning body of events at your facility was not a sound business strategy and so it proved. Perhaps getting his own back, France decided that the purse ARI was offering was too small for a superspeedway race, and dropped the event from the calendar. LoPatin was left scrabbling but managed to pull together a $15,000 winner's purse ($100,000 in today's terms) following some last minute deals and the race was back on.

The uncertainty did nothing to help ticket sales among a confused fan base and (as was so often the case in the short history of ARI) the weather also became a factor. The College Station area was hit by torrential rains in the run-up to the event, flooding the infield and forcing it to be closed to the public for the race itself. It turned out not to be a major issue; a paltry crowd of less than 24,000 turned out to watch Bobby Isaac take the win in a Dodge Charger, leaving many of the grandstands looking empty.

By the early part of the 1970 season, LoPatin was gone; the board of ARI grew impatient with the lack of return on their investments thanks to continued poor weather and disastrous ticket sales at its venues and sent him packing. The 1970 NASCAR event was subsequently cancelled, ostensibly because of a strike at Goodyear which left the company unable to test new tires developed for Texas; in reality it was probably slow ticket sales which proved the final straw. The stockcars did return in 1971 – with the organisers hoping to tempt a bigger crowd by encouraging USAC Indycar drivers to take part. The gambit backfired when USAC threatened any driver who entered with suspension and in the end only 18,600 people showed up for the race.

Somewhat surprisingly there were two NASCAR races in 1972, the Texas 500 moving to late June and the new Lone Star 500 becoming the season finale. The June race was (to no-one's surprise) run in oppressive heat, with temperatures hitting the nineties and drivers having to endure 140 degree cabin temperatures. Richard Petty won that race and went into the final round in contention for the championship with Bobby Allison. This probably helped ticket sales, though a race day crowd of 33,000 was still well below capacity. In the event, Allison was off the pace for the first time that year, finishing well down in fourth, while Petty duelled with Buddy Baker and AJ Foyt for the win. In one of the closest finishes in the track's history, Baker beat out Foyt by a matter of feet, closely trailed by Petty who consoled himself with the championship.

A year later, only the June race date remained, NASCAR having moved the finale to more familiar territory at Rockingham. Petty wound out the winner by two laps. That year also saw the arrival of the USAC Indycars for the first time, with a 200 mile race being won by Al Unser. During qualifying, Mario Andretti set a world closed course speed record of 214.158 mph – a mark that stood in the Guinness Book of World Records for another twelve years.

But crisis was never far away at TWS and the 1974 season proved a disaster, though this time for reasons well beyond their control. The oil crisis, which saw energy prices skyrocket overnight, left the circuit with little choice but to cancel its races. With gas stations closed at weekends and spectators needing to drive fairly long distances to reach the track, holding races would likely have been a financial bloodbath. Racing would return as soon as the oil crisis was over, said the track owners.

While motorsport took a back seat, there was once notable event held at TWS in 1974; Willie Nelson's 4th of July Picnic, an annual three-day event put on by the country music star. Among the line-up performing that year were Jimmy Buffett, Townes Van Zandt, and Kinky Friedman, though the concert is best known for the somewhat riotous nature of the crowd, who set light to numerous cars in the infield, including one owned by folk singer-songwriter Robert Earl Keen. A photo of the burning car features on the cover of his album, Picnic. Unsurprisingly, Mr Nelson and his compadres were not invited back.

Racing (at least at a serious professional level) did not return until 1976, when the USAC Indycars held two races, a 150-miler in August and a 200 mile race in October. AJ Foyt took pole for both and won the first, with Johnny Rutherford beating season champion Gordon Johncock in the second. Further visits continued until 1980, when the fallout of the row between USAC and the new CART sanctioning body saw the race cancelled. The Indycars never returned and it was the end of the superspeedway's top level single-seater career.

NASCAR did eventually make its comeback in 1979, but the return was brief; after the 1981 event Bill France announced that the by now fading facilities and crumbling track surface needed substantial improvement if the series was to return. Given the poor attendances (the final race saw only 18,000 show up) and the ensuing financial difficulties the track found itself in, this was never likely. Track bosses protested loudly that there was nothing wrong with the facility but their complaints fell on deaf ears. NASCAR would be elsewhere in June 1982.

Thus began a slow decline of the superspeedway. It remained popular for testing, particularly once in-season tests at tracks on the NASCAR schedule were banned. However, it was the road courses which would ultimately keep the facility operating through the 1980s, with it quickly becoming the most popular road course in Texas for amateur/club racing. While the oval had deteriorated, the 2.9 mile road course (which used only the front stretch of the superspeedway) remained in good condition. The wide pavement and vast run-off areas also made it an ideal place to learn the craft of racing, as there was relatively little hit, while the paucity of major events meant track time was easily available and cheap.

Into the 1990s, the circuit was bought by Ishin Speed Sport, who put money into track renovations with the aim of restoring racing to the oval. Duly the ARCA stock car series scheduled races between 1991 and 1993, but there was not a huge amount of money to be made and Ishin eventually bowed out, the circuit eventually coming into the ownership of Bill Mather, a property developer.

While oval racing ceased once more, the superspeedway still had a few world records up its sleeve during testing. On February 3, 1993, Jeff Andretti set a new unofficial closed-course speed record for Indycars of 234.5 mph in a Lola-Buick, the fastest speed ever recorded at the circuit. It was Andretti's comeback test after breaking his legs in the previous year's Indy 500. Given the advances in Indycar technology within just a few years, it is frightening to think what speeds might have been possible in the CART ChampCar heyday...

Then in January 2009, Greg Biffle managed to reach a top speed of 218 mph in a test for Roush Fenway Racing, who were testing their Michigan and Fontana setups as part of evading NASCAR's testing ban. This became the fastest speed ever achieved on this track by a stock car (amateur or professional), with the average speed for the full lap set at 195 mph. Ultimately, the lack of a SAFER barrier and the increasingly bumpy surface would mean this would be a record which would not be beaten or indeed attempted again. The advent of the Texas Motor Speedway at Forth Worth also meant an end to any lingering ambitions that TWS may have had in resurrecting the oval.

Texas World Speedway's road course remained an extremely popular facility, however. Even the opening of Circuit of the Americas didn't dent track bookings, as TWS was much cheaper and much more available. Even the decaying facilities - grandstands were unsafe for use and the main hospitality suites largely been abandoned to a state of disrepair - did not prove a deterrent.

However, the writing was always firmly on the wall and in March 2015, Bill Mather announced the track would close in mid-June to make way for a $55 million housing development. The project, known as Southern Pointe, is being developed by Mather himself and will feature 1,400 homes, commercial sites, nature trails and space for a school. Development was scheduled to start almost immediately after the final weekend of racing, bulldozing away 46 years of motorsport history.  However - as has often proved to be the case at TWS - the reality became more complicated, as delays in securing zoning permits provided a stay of execution for the remainder of 2016.  With these remaining unresolved, a calendar of events was booked for the 2017 season as well, so TWS managed one further final hurrah.

The entire 600 acre facility was leased during the latrter part of 2017 to Copart Inc as a catastrophe storage facility for vehicles damaged by Hurricane Harvey. Then on July 19, 2018, developers broke ground to begin construction of the Southern Pointe master-planned community.  The diggers tore through the banking and finally put an end to the often chaotic story of racing at College Station. As of December 2018, the old TWS front road billboard was covered with a Southern Pointe banner, removing one last vestige of the circuit forever.

Texas World Speedway was located at College Station, Texas. The nearest major airport is George Bush Intercontinental at Houston, around 85 miles from the former track. Austin-Bergstrom is another alternative, though this is further away at around 111 miles.

The circuit was located around 80 miles north-west of Houston, though is now closed and under development for housing.