Richmond International Raceway has a rich history of NASCAR racing, although its current configuration dates only from 1988. From its earliest days as a dirt oval, Richmond has been a popular venue, drawing large crowds to watch some of stock car racing's finest battle it out for victory.

It sits as pPart of a much wider entertainment complex, Richmond Raceway Complex, host to over 190 various events from consumer/trade shows to outdoor festivals in the buildings and outdoor spaces

Originally known as the Atlantic Rural Exposition Fairgrounds, the circuit held its first race in 1946 as a half-mile dirt track. Set within the grounds of the Virginia State Fairgrounds, otherwise known as Strawberry Hill, the circuit soon rose to prominence, gaining its first NASCAR event in 1953. In 1955 Paul Sawyer and legendary racer Joe Weatherly acquired the property which by then was known more simply as Atlantic Rural Fairgrounds.

The circuit continued to host NASCAR Grand National events during the 1950s and 60s, with Joe Weatherly among the winners at his own track. The oval was also an early pioneer of night racing, with a special Tuesday night race held under temporary lights in 1964.

In 1967, the course changed name, adopting the title of Virginia State Fairgrounds, however it soon changed again when the track was paved for the first time mid-way through 1968, becoming the Richmond Fairgrounds Raceway for the start of the 1969 season. The paved course was remeasured in 1970 and found to be slightly longer than a half-mile at 0.542 miles – race distances continued as before, despite this discrepancy.

By now the track had two established NASCAR events, one in spring near the beginning of the season, the other an autumn race. Due to its close proximity to the Richmond metropolitan area, races were almost always complete sell outs.

The original track closed on February 21, 1988 and the facility was enlarged to the current 3/4 mile oval, which reopened on September 10, 1988. Perhaps in an effort to distance the track from the fairgrounds, the name was changed by Sawyer upon reopening, becoming known as Richmond International Raceway from then on. The new circuit was just as popular with fans and boasted seating for 60,000 fans.

Perhaps fittingly, given its early experimentation with the format, night racing returned to Richmond in September 1991, when permanent lighting was fitted to the circuit. From 1999, both NASCAR events would be run under the lights.

The end of the millennium saw two significant developments. In 1999, the circuit acquired the fairgrounds themselves, renaming them as Richmond Raceway Complex. The sprawling, 1,000-acre, multi-purpose facility has six permanent buildings with more than 160,000-square feet of exhibition and meeting space. In addition, the Complex has three outdoor areas that can host anything from a small corporate picnic to a large outdoor festival. The Horticulture Garden is a beautifully landscaped indoor/outdoor facility that can accommodate up to 1,000 people for corporate receptions and weddings. The facility has an amphitheatre with fixed seating that accommodates 6,000 people, as well as a 1,000-seat covered dirt arena.

Later that year the whole facility was acquired by the International Speedway Corporation (now wholly owned by NASCAR), who have continued to invest in the circuit. Spectator capacity has seen steady development, with seating now able to cater for just under 100,000. Other developments include the 2010 debut of a new high-tech timing and scoring tower. The cap features four high definition LED screens that measure 38-feet wide by 24-feet high. The screens broadcast live race action and pre-produced video and graphics, while the main pylon shows the race running order and has the ability to rotate through the entire field.

In 2017, the circuit announced a further rebranding exercise, dropping the 'International' to become the simpler Richmond Raceway.  As well as the new identity, plans were announced for Richmond Raceway Reimagined, a  $30 million investment to improve the fan experience with a modernised infield.  This involved adding dedicated viewing areas to watch teams working on their cars in the garages, as well as viewing stations for post-race inspections. It also brought victory lane closer to the grandstands and saw the tunnel under Turn 1 enlarged.

The modernised infield first debuted at the 2018 fall NASCAR Cup race, which was also the first NASCAR play-off weekend.

Planning a visit to Richmond Raceway? Find the best deals near to the circuit on hotels, apartments and rooms to rent from the map below.

Richmond Raceway is located in north Richmond, Virginia, USA.  The city's International Airport is a 20 minute drive to the south.

The circuit is located between I-95 and I-64 on East Laburnum Avenue.  If travelling from I-95, take Exit 82 (and not 76-A for the Fairground) and head along Chamberlayne Avenue (301), turning left at the third traffic light onto Azalea Avenue. From here follow signs to the cirucit (approximately 2.5 miles).  If arriving from the west on I-64 , take exit 186, turn left at end of exit ramp onto Laburnum Avenue and follow signs to the circuit (approximately two miles).  If travelling from the east along I-64, take exit 195 and turn right at end of exit ramp onto Laburnum Avenue.  The circuit is signposted on the right hand side after about five miles.

On NASCAR race days, a free shuttle bus operates from the Richmond Coliseum parking area at North 7th Street in downtown Richmon.   A small parking fee applies at the Coliseum lot, which is conveniently located less than five minutes from the intersections of I-95 and I-64. 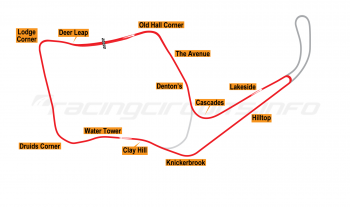 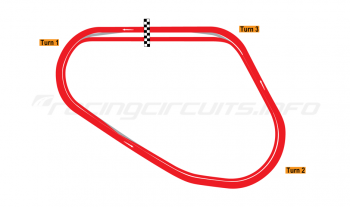 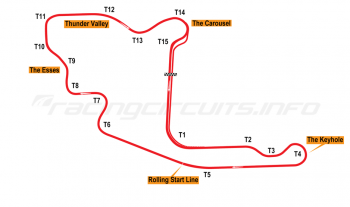