Portland International Raceway is an unusual case of a circuit emerging from the ruins of the flooded and abandoned city of Vanport, making use of the some of the former road networks to eventually form a permanent racing facility.

Owned by the City of Portland, the complex comprises an FIA Grade 2 circuit, which can be configured with or without the Festival Curves chicane section.  The main straight also doubles up as a popular drag racing facility.

Major races each year are the Portland Grand Prix for IndyCars, while the NASCAR Xfinity Series hosts the Portland 147.

The racing circuit at Portland owes its existence to an unhappy chapter in Oregon's history, being built on the site of a city destroyed by flooding.

The city of Vanport was hastily built by Henry Kaiser in 1942 to house World War Two shipyard workers. Buildings went up quickly and soon Vanport had a population of more than 40,000, making it the the second largest city in the state of Oregon at that time and the largest public housing project in the nation.

Nestling between the contemporary Portland city limits and the Columbia River on reclaimed lowlands, Vanport was protected by a system of dykes which held the waters back. Tragically, after a weeks of heavy rains, the dykes failed at 4.17pm on Memorial Day, May 30, 1948. A 10-feet high wall of water rushed in killing 15 people and within half an hour the entire city was underwater. When the waters eventually receded, a picture of complete devastation emerged, with virtually all buildings destroyed and no prospect of the remainder being habitable. After the debris was cleared away, the city was abandoned.

Racing begins for the Rose Cup

In 1960, the city of Portland purchased the land from the Army Corps of Engineers for $175,000. It did not take long for racing enthusiasts to see the potential of the land and, a year later, the first races were held along the abandoned roads. The Portland Rose Festival Association was persuaded to sponsor the race and the Rose Cup was born, with its first running in June 1961. The race has been an important part of the Rose Festival ever since.

The original circuit began on the remains of Cottonwood Street, with a temporary paddock area on the opposite side to the modern facility. The main straight was also used as a popular drag strip. The circuit then turned right to follow the former Lake Avenue before turning right again onto Victory Boulevard, taking in the junction with Force Avenue before resuming along the same back stretch that is still in use today. The final series of turns, known as 'the Circus' to racers of the day, rounded off the lap.

Changes were made to the final turns in the mid-60s, leaving the with a layout similar to today, but the first major alteration came in 1969 when the track was shortened to 1.8 miles by using Force Avenue as turn one, rather than Lake Ave. At the same time Cottonwood Street was repaved as a 1/8 mile drag strip.

A permanent course is created

By the dawn of the next decade it was becoming clear that racing through the old city roads, with its numerous hazards, was becoming too dangerous. Racers leaving the track unexpectedly could collide with leftover concrete foundations or even find themselves driving into ponds or the water sloughs which were still a feature of the area. The major sanctioning bodies began refusing to hold races at West Delta Park and plans were formulated to convert the course into a permanent facility.

The diggers moved in April 1971 and, alongside a complete repaving, the Force Avenue portion of the course was extensively reconfigured, with a series of sweeping curves replacing the previous straight. Armco barrier was also installed around the track, while the shut down area of the drag strip was increased, to allow for quarter-mile drag racing. In addition, the staging lanes/pre grid area and the return road along the drag strip were paved. For road racing, the pit lane was formed in the staging area of the drag strip. The first major race on the reconfigured Portland International Raceway was the Rose Festival Drags on June 5/6, followed by the Rose Cup Races on June 12/13.

Funded by a $100,000 loan arranged by the Rose Festival Association from four banks, all of the monies were paid back by 1973 and the facility has operated as a commercial enterprise ever since, generating a profit for the City of Portland and meaning it requires zero funding by the taxpayer. Popular events during these years included the annual visit of the IMSA sportscars.

In 1984, the track underwent some $800,000 worth of improvements. The most noticeable change to the track itself was the addition of a chicane (known as the 'Festival Curves') toward the end of the main straight/drag strip, while a permanent pit lane and paved paddock area was installed for the first time on the infield. Elsewhere, Victory Boulevard was widened and concrete barriers and debris fencing were installed along the inside of its entire length. The final turn was also repaved and widened near the new pit entry road. This required removing 150 feet of existing guardrail. The entire front straight/drag strip (Cottonwood Street) was also repaved at this time. These changes increased the track length to 1.967 miles.

The changes propelled PIR into a new league, allowing the introduction of CART Indycar racing for the first time. The Grand Prix of Portland quickly became a headline attraction for the track, which soon became a favourite among the drivers. Close races were common and the track played host to the smallest ever winning margin on a road course in 1986, when Michael Andretti ran out of fuel on the final lap, allowing father Mario to catch up and nip by him at the line to win by just 0.070 seconds. That margin would stand as an all-time record until 1997, when the circuit witnessed the closest two-car and closest three-car finish. Mark Blundell beat second-placed Gil de Ferran by 0.027 seconds and third-placed Raul Boesel by 0.055 second, in a thrilling three-wide finish.

By 1992, the speed of the CART racers need to be slowed and the Festival Curves were reconfigured into a much tighter chicane, paved in concrete. It was perhaps not the most elegant solution and the Festival curves were again modified for the 2005 season, with the second turn widened and made faster to try and alleviate the traditional first lap pile-up.

Further modernisations bring the circuit up to FIA specification

In 2008 PIR went through a track renovation, with a complete repaving with new asphalt and reconfiguration of Turns 4 to 7. The fence on the inside of turn 6 was moved to provide a better sight-line through the corner, while Turn 7 was sharpened to slow down racers prior to entering the back straight. FIA-specification curbing was also installed around the track which opened in its new form on February 23, 2008, with a ribbon cutting ceremony.

The unification of the ChampCar and IndyCar championships in 2008 left no room on the calendar for Portland and along with the departure of the ALMS two years previously, the circuit was left with the prospect of no headline events. A new top-category event was found however, in the form of the NASCAR K&N West Series, which made Portland an annual stop until 2013, after which the circuit was left with a calendar comprising only of local races for the ICSCC, SCCA and OMRRA championships.

Diversifying, the track went on to host bicycle races and launch a popular winter event sees the entire circuit festooned with festive lights, creating a drive-though 'winter wonderland' in the run-up to Christmas each year. After several relatively fallow years for major events, in 2018 the circuit returned to the IndyCar Series calendar and has remained there each season since.  The Grand Prix,  promoted by Green Savoree Racing Promotions, is held over the Labor Day weekend.

From 2022 the circuit also boasts another major visitor in the NASCAR Xfinity Series for the Portland 147, the only standalone race on the calendar, held on the same weekend as the Cup Series races at Gateway.  It will be the first time since the Truck Series raced at Portland in 2000 that a NASCAR national series race has been held in the Pacific North West.

Planning a visit to Portland International Raceway? Find the best deals near to the circuit on hotels, apartments and rooms to rent from the map below.

The circuit, thanks to its unusual history, is located within the major city conurbation and is a short distance from the downtown area. It is easy to reach by car, being located immediately alongside Interstate 5 – take Exit 306B to the circuit entrance.

The circuit is also easy to reach by public transportation, using the MAX light rail system. Ride the Yellow Line towards the Expo Center and get off at the Delta Park / Vanport MAX Station, which is adjacent to the track entrance. 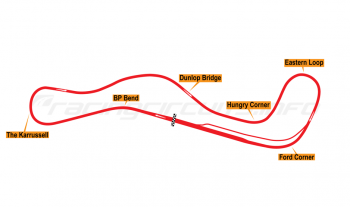 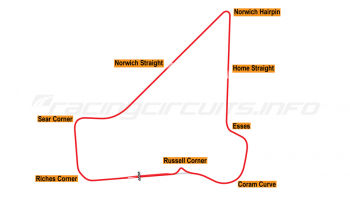 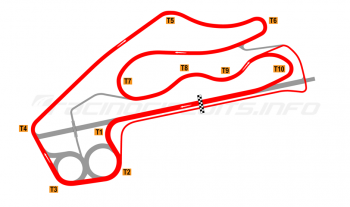