Pacific Raceways is proof that circuits built around drag strips need neither be flat or dull. The course near Seattle has a long history and, while drag races remain the highest level professional events today, it enjoys a rich road racing pedigree.

Still owned by the Fiorito family, the track continues to develop its facilities, with brand new enclosed garages the latest improvements under construction.

The circuit hosts SCCA US Majors races, along with other events organised by the Washington Motorcycle Road Racing Association, the Society of Vintage Racing Enthusiasts and several others.

One family has been a driving force (pun intended) behind the facility since its inception. The Fiorito family became involved in 1958 when Dan Fiorito Sr. wanted to do something to help alleviate the burgeoning problems of teenagers racing on the public roads. What was needed was a safe environment for them to indulge their passion for speed and, as the owner of a road construction company, Dan Sr. was ideally placed to act. Working with other local enthusiasts he agreed to construct and pave the track and he and his brother Joe and team of workers spent their 1959 summer break hard at work.

What they completed was fairly unique. While the drag strip was largely conventional, the 2.25 nine mile road course was spectacular. From a large radius curve to begin the lap, it plunged downhill through an elevation drop of 110 feet to a series of switchback hairpins before climbing back through the woods to rejoin the drag strip. Cookie cutter it isn't, even if the basic plan on paper might not look anything particularly extraordinary.

The Fioritos soon found themselves in overall control of the new Pacific Raceways, as the road and drag courses were named. Road racers were quick to praise the circuit as a true driver's track, while spectators too were similarly enthused. Opening in 1960, the course held numerous SCCA events and even found itself part of the USAC Champ Car schedule for one glorious season in 1969. True greats Mario Andretti and Al Unser took a heat a piece in the double-header event. Team Penske also won its very first professional race at Pacific Raceways - the first of many for the iconic team.

Drag racers too made Pacific Raceways their north-western home. The inaugural race was held on July 3rd and 4th, 1960. Dick Kalivoda won the inaugural NHRA event, a divisional race. He set an NHRA national elapsed-time (E.T.) record with an 11.78-second pass.

In 1972 upgrades were made to the pit facilities used by the road course, while a new section of track was built to bypass the original Turn 5B, creating a much sharper and slower series of turns after safety concerns were raised by the ever-rising speeds of contemporary road racing machinery.

In 1976 the Fiorito family made the decision to step back and, while maintaining ownership, offered the facility out on a 25-year lease. The new promoters immediately imposed a change of name, with the circuit now marketed under the Seattle International Raceway banner. Operations continued largely as before, though there was a continuing focus of professional events around the drag racing facilities - indeed, the strip earned the distinction of hosting NHRA Nationals for 27 years straight. The last professional road course race was held in 1985, when NASCAR legend Dale Earnhardt Sr. took victory in a Winston West event, after which the road course became the domain of local and regional amateur club racing.

When the lease expired on January 1, 2002 the Fiorito family resumed control of the track, and restored the original name of Pacific Raceways. Problems had mounted in the final years of the lease, with the SCCA National office decertifying the track due to safety issues in late 1998. Under the Fioritos investments in infrastructure were swift to come, with some significant changes to bring the road course safety levels back up to SCCA standards. A new start-finish straight was created by running the course along the line of the previous pit lane, in order to separate it from the drag strip staging area. This then rejoined the drag strip around halfway down via a fast left-right kink. Improvements were also made to the back end of the lap, with significant widening of the track through turns 7-8-9.

In 2004, the drag strip received its own repaving, after numerous complaints in previous years about the condition of the by-then venerable road surface. This has helped ensure that the facility remains an integral part of the NHRA calendar, with the Northwest Nationals continuing to take place each August.

In 2014, the Fioritos decided to offer Pacific Raceways for sale, in the hope that an investor could be found to bring to reality plans to turn the 320 acres facility into a successful automotive and design technology campus. The idea would be to partner with state research facilities and neighbouring cities to attract global leaders in the renewable energy driven vehicle industry, who would make use of the road course as a testing facility. In April 2014, the planned development - known as Pacific Innovation Center - received the Washington State Department of Commerce's designation as a "Project of Statewide Significance".

Despite numerous rumours - including one that aviation firm Boeing was interested in purchasing the facility - no firm bids were received. After a year track president Jason Fiorito announced the track had been taken off the market and the family re-committed itself to safeguarding the long-term future of the circuit. They plan to continue to invest in the facility, including taking forward the Pacific Innovation Center, alongside other commercial developments to provide space for businesses and personal garages and an upgraded road course. Five and 10 year improvement plans are being worked through, which will hopefully safeguard the long-term future and make the facility economically viable.

Planning a visit to Pacific Raceways? Find the best deals near to the circuit on hotels, apartments and rooms to rent from the map below.

Pacific Raceways is located near to the cities of Auburn and Kent in Washington State, USA. Seattle-Tacoma International Airport is around 35 minutes' drive from the circuit. 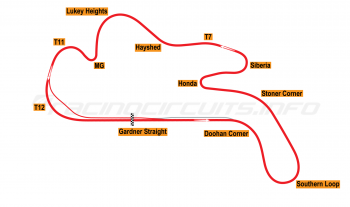 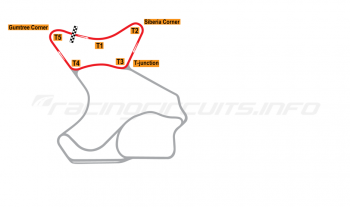 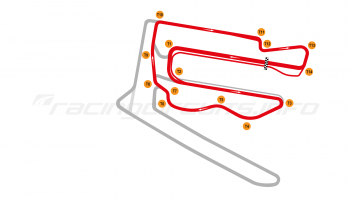