NOLA Motorsports Park, just outside New Orleans, Louisiana, is one of a new generation of motor racing tracks which initially began with no ambition to host motor racing events. Instead, the plan envisioned an exclusive country-club-style track catering primarily to wealthy car and motorcycle enthusiasts.

As the facility gained in popularity, the plans changed, with a greater reliance on selling day passes for non-members, hosting business conferences and eventually hosting racing.  AMA motorcycles and Formula Ford were first to arrive and then in 2015 its biggest event, the IndyCar Grand Prix of Louisiana.  Sadly, this proved to be a one-off.

NOLA Motorsports Park was the brainchild of former doctor Laney Chouest, who made his fortune from the family marine transportation business. In 2009, he attracted a lot of interest (and scepticism) when he announced he was to spend $30 million in creating the motorsport park. The plans called for the facility to built in three phases, with an initial 2.75 mile road course coming first, with a second southern road course being built at a later date to create a combined 5.37 mile circuit.

He chose an area of former swampland south of the TPC Louisiana Golf Course and enlisted famed track designer Alan Wilson to pen the whole complex. Alongside the road courses, the park would feature a multi-layout kart track and an 8-acre paved area for autocross. A restaurant, 34,000-square-foot clubhouse/event centre and plots for condominiums with garages underneath were also envisaged.

Construction began in 2010 and the swampy ground presented a number of challenges. Simply paving as normal would have been a recipe for disaster, so 200,000 tons of fly ash, a byproduct from coal-fired power stations, was mixed with the first several feet of clay, creating a concrete-like foundation on which to lay the track. Interesting innovations included the laying of an extensive network of fibre-optic cabling under the track, allowing easy 'plug and play' from multiple locations around the circuit for television companies and corner workers, while track officials also benefit from an extensive wireless network which allows them to access a scoreboard, control a TV or PA system, or check in on lap times from anywhere on the track.

The track was largely complete by the end of 2011, with finishing touches to amenities being complete by January 2011. With little else in the local area to satisfy the need for speed in the local area, the track quickly became popular, quickly selling 40 family memberships. Equally popular were the open-track days, which allowed anyone to come and lap the track for a more affordable fee.

Soon the track set its sights on hosting occasional motorsport events to boost income and announced a deal to host the 2012 AMA Pro Racing season finale. Temporary bleachers, similar to those seen at professional golf tournaments, were brought in to cater for spectators. Josh Hayes won the feature race aboard his Yamaha to become the first victor of a professional race at NOLA.

In February 2014, the venue was used by the US FF2000, Pro Mazda and Indy Lights series for its winter testing series, in the process allowing IndyCar officials to evaluate the facility. By May, momentum had gathered and the track was announced as the host of the Grand Prix of Louisiana from 2015 onwards. A series of track upgrades were carried out over the winter months to facilitate the higher-powered single seaters. A new backstretch was created and minor modifications made to corners at the south end, with additional temporary spectator seating brought in ahead of the event to boost capacity at what was the first Indycar event ever run in the state.

Sadly for track officials, the weather gods were not on NOLA's side when the Grand Prix of Louisiana finally got under way.  Heavy storms deluged the track and turned it into a quagmire, to the extent that qualifying was completely rained off.  The race fared little better, with rain continuing and much delay before the cars got under way, even then spending multiple laps carried under the safety car.  Only 47 of the scheduled 75 laps could be run due to time constraints, with James Hinchcliffe taking victory for for Schmidt Peterson Motorsports.

Financially, the Grand Prix was a disaster, with only 10,000 spectators estimated to have braved the poor weather conditions. After the race, legal disputes erupted involving the promoter, the track, and other related parties and, despite a three year contract with IndyCar, the decision was made to cancel the event altogether.

Emerging from the debacle, NOLA Motorsports Park has set its sights lower, hosting regional and club racing events successfully in the years that have followed.

Planning a visit to NOLA Motorsports Park? Find the best deals near to the circuit on hotels, apartments and rooms to rent from the map below.

NOLA Motorsports Park is located in Avondale, New Orleans, in the state of Louisiana, USA.  The nearest airport is Louis Armstrong New Orleans International, located around 30 minutes drive to the north.

The circuit can be found on Nicole Boulevard, around 30 minutes drive from the city's French Quarter.   From the city centre, head out on US-90 (West Bank Expressway) and then exit onto Segnette Boulevard (signposted for TPC Louisiana Golf Course).  Follow the road as it continues into Nicole Boulevard - the circuit entrance is on the left after around 1.5 miles.

Parking is available on site and shuttle buses are also likely to in operation during the Indycar race weekend - check the event website at gpofnola.com for details. 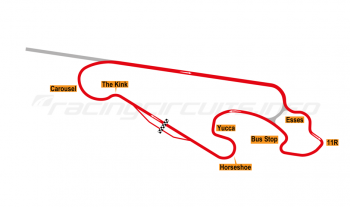 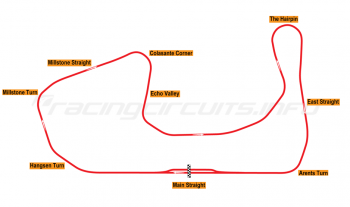 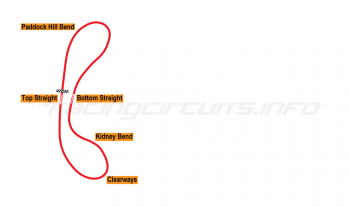