Nelson Ledges Road Course in rural Ohio has been in operation for more than 40 years as a club racing track, albeit one of the fastest in America, becoming known as the home for amateur endurance racing in North America.

The circuit found itself in turbulent times in 2014, with a sudden change of management and difficulties with track maintenance casting a pall over proceedings and actually prompting a short suspension of racing. The track was then bought by real estate investors Brian Ross and Brian Ross Jr. and a page was turned.

Happily, new owners have brought fresh ideas and investment, which has led to a resurgence and attention from a range of new club racing series.

Situated on an Ohio back road near to the small town of Garrettsville, to the east of both Cleveland and Akron, the circuit began life as a dirt track in the 1950s before owner Marvin Drucker decided to pave the facility in 1964. The original course was just over a mile in length and challenging enough in its own right, however the decision was taken to nearly double the length in 1970, with the project funded by sponsorship from the Gulf Oil company.

From Turn 4 a new mildly banked looping corner took the cars to another long triple-apex right-hander, named The Carousel. A new back straight – complete with an infamous kink that could be taken at anything up to 130mph – led the cars back to the old course. Flat but fast, the new Nelson Ledges could be lapped in under a minute by Formula Atlantic cars.

The new circuit also brought one other significant safety innovation – tyre walls. It's estimated some 70,000 used tyres were brought in to line the entire perimeter of the circuit as an added protection for errant race cars. In the days before tyre recycling, this was an innovative use, quickly copied elsewhere. There was a pragmatic reason too – with Goodyear's Akron manufacturing facility down the road, the tyres were plentiful and cheap. Long-time track manager John McGill – who had been involved in the circuit's creation since day one – was honoured by the Sports Car Club of America who created an annual trophy in his name, awarded to those who make significant contributions to club racing.

In its new guise the circuit prospered as a venue for club racing. Facilities were basic but on par with other similar venues of the time. Soon it became a hub for the SCCA's 'showroom stock' class, a very early forerunner of today's Pirelli World Challenge, which saw production cars with an initial purchase price of no more than $3,000 do battle. In 1980, Nelson Ledges hosted a 24 hour race for the series, with the 'Longest Day' summer event proving a catalyst for the series' expansion and becoming one of the SCCA's 'Triple Crown' endurance events.

Once described by racer Carroll Smith as a "sociological phenomenon" and an "annual exorcise in masochism", the 24 hours was held on or near to the summer solstice each year through the late 1990s, before being revived in 12 Hour form from 2004-06 and one final twice-round-the-clock marathon in 2007.

John McGill retired and handed over track management duties to his son and daughter Scott and Kerrie Lane part-way through 2003. Half of the track was re-paved, as was pit lane, access roads and the paddock. Run-off areas were excavated and re-designed, including the addition of four miles of drainage from the track. These all helped address common complaints from racers about poor drainage and a rough and extremely bumpy surface, which had been known to shake parts from competing vehicles.

Sadly, the downturn in the economy in recent years combined with damage caused by harsh winter weather has led to a return of some of the problems of old with the track surface. The number of races declined as the poor surface deterred car owners from running for fear of damaging their equipment, which of course in turn reduced track income and led to even less resources being available to address the issues.

Things came to a head in 2014, when bike racers experienced severe issues with track break up, with several machines reportedly damaged by flying debris. With the Moto Series club – a significant customer of the circuit – suggesting the issues were likely to force it to go elsewhere unless changes were forthcoming, the Druckers elected to replace the track management team and temporarily suspend events while immediate issues were addressed. Todd Karam, general manager of Moto Series, was asked to take over track management by the Druckers.

Under the new management, track repairs have been carried out in several places, including some significant patching, which has at least stabilised the situation. Other resurfacing has also taken place within the paddock area – frequently a problem area in inclement weather. After a faltering start (not helped by a dispute with the previous management over who owned what track facilities, including essentials such as mowing machines and timing and scoring equipment), late season events were run successfully and there was a general feeling that improvements could be seen with each successive event.

New owners to the fore as circuit rebounds

In December 2015, the track was purchased by real estate investors Brian Ross and Brian Ross Jr. after five years of negotiations.  Taking the plunge, the Ross's paid for the entire track to be resurfaced, which was something of a gamble without any confirmed sanctioned racing. Thankfully it paid off and the ChampCar returned during the summer of 2018, with a near full grid for a 24 hour race. Upgrades were made to the pit lane to facilitate round-the-clock racing.

Since taking over, the Ross's have continued to improve facilities, clearing out some of the detritus that had gathered on the grounds, including numerous derelict motorhomes and mobile homes which had been abandoned by their owners.  Other improvements included a concrete walkway for pit lane, proper utilities and further drainage work.  The result is much improved and more welcoming and useable facility, that will hopefully continue to serve club racing well for decades to come.

Further good news followed in 2020, when the SCCA re-certified the course, with several sanctioned events following. It had been planned that the Longest Day endurance race would be revived in 2021, only for it to be postponed to 2022.  Due to be held in the summer of 2022 it will once again be run under SCCA sanction, with a return to a four class structure for production racers. It should be just like old times.

Planning a visit to Nelson Ledges? Find the best deals near to the circuit on hotels, apartments and rooms to rent from the map below.

Nelson Ledges Road Course is located at Garrettsville, near Warren, Ohio, USA. The nearest international airport is Cleveland Hopkins, around an hour's drive from the circuit, while Youngstown-Warren Regional Airport offers domestic connections and is 30 minutes drive to the east.

The track can be found on the south side of Ohio State Route 305 in Garrettsville, between OH-282 and US-422. It is approximately one mile east of the intersection of OH-282 and OH-305. 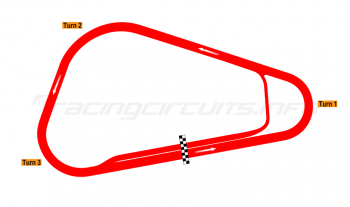 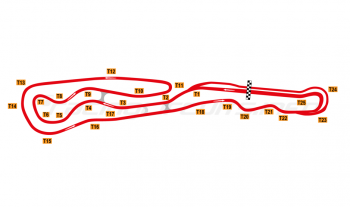 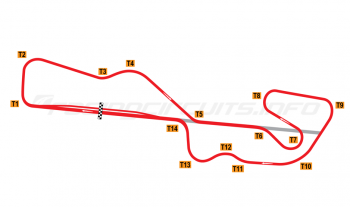