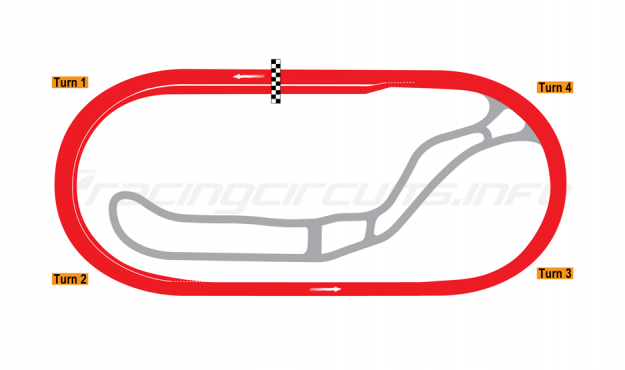 The Milwaukee Mile, located within the grounds of the Wisconsin State Fair Park, claims a unique slice of motor sport history, being the oldest continuously operating venue for motor racing in the world.

Originally a private horse racing track, the one-mile oval has been in existence since at least 1876. In 1891, the Agricultural Society of the State of Wisconsin purchased the land to create a permanent site for the Wisconsin State Fair. The first automobile races were held in 1903, albeit on a dirt surface. William Jones of Chicago won a five-lap speed contest, setting the first track record with a 72 second, 50 mph lap in the process.

Early racers had more than a few hazards to contend with, as the facility was still essentially set up for horse racing, with only picket fencing around the perimeter. Gradually, improvements were made to make it more suitable for car racing - a concrete wall finally encircled the oval in 1920 - although horse racing continued. This kept the groundsmen busy as they constantly had to loosen the surface for the horses and harden it again for the cars.

Racing continued as an additional feature of the State Fair, though in the 1920s the track fell out of favour in comparison to the board tracks which had become fashionable in the era. Gradually, the Mile's popularity increased again, thanks in no small part to Tom Marchese, who promoted the races from 1929 to 1967.

The State Fair Board gave Marchese its full backing and the improvements continued. A new grandstand, seating 14,900 spectators, was constructed in the 1930s and the first Champ Car events were held; a 100 mile event in June and a longer 200 mile event each August. These continued until 1982, when the August event was eliminated.

Paving of the oval

The modern era began at the circuit in April 1954, when the State Fair Board decided to begin concentrating more on auto racing and agreed to the paving of the one mile oval, though the half-mile interior oval was retained for harness racing until 1959, while the quarter-mile dirt oval saw weekly sprint car action. An infield road course was also constructed, opening on August 15, 1954 and increasing the diversity of events that could be held.   This was the first infield road course constructed and evidently they didn't get it quite right; the first version was slow and the track surface broke up during the first meeting, leading to competitors to switch to the oval with straw bale chicanes.

The road course was slightly modified the following year to make it less sinuous and fix the surface issues, in which form it has remained ever since.

The Milwaukee Mile can claim some American Football history,to add to its long automobile and horse racing heritage. A football field and accompanying stands stood on the infield of the 1/4-mile dirt oval, becoming known as the Dairy Bowl.

Between 1934 and '51 it hosted the NFL's Green Bay Packers several times a year and even hosted the 1939 NFL championship game, which proved a walkover for the Packers as they beat out the New York Giants to claim their fifth title.

In 1940 and 1941, the Dairy Bowl also served as the home of the Milwaukee Chiefs of the third American Football League. The 50-yard line sat where the start-finish line is currently located.

Into the 1960s, the Milwaukee Mile claimed another slice of history, when Jim Clark sped to victory in a rear-engined Lotus-Ford in 1963, marking the beginning of the end for the traditional Indy Roadster. A.J. Foyt would take the last win for the front-engined machines the following year before he too switched to the rear-engined revolution, although he gave the roadsters a final and unintended hurrah in 1965. When his primary car and crew couldn't make it to Milwaukee in time for qualifying, Foyt towed his backup dirt car from Springfield, converted it to asphalt specification and promptly put it on the pole. Even A.J.'s genius couldn't hold back the tide completely as, despite spending 16 laps in the lead, he was beaten by Gordon Johncock's by-now-de-rigeur rear-engined entry.

Further investments in the facility came in 1967. when a full pit lane, separated from the main track by a retaining wall, was installed and the whole track resurfaced. A new enlarged paddock area spelled the end of the half and quarter mile dirt ovals, which were ploughed under to make room, confirming the Mile as a car-only facility once and for all.

Through the 1970s, the main events remained the two USAC Indycar events, bolstered by regular stock car racing and by 1980 the twin Indycar events came under the sanction of Championship Auto Racing Teams (CART). NASCAR made its first appearance in 1984 with the Busch Late Model Sportsman series (the forerunner of today's Nationwide Series), while the final sportscar races were held on the road course that same year. The road course was in fairly poor condition by this time and it would be 20 years until it was resurfaced and used for events once more.

After one more Busch Late Model Sportsman series in 1985, NASCAR departed and by the early 1990s, the future of the venue as a whole was at risk. With Milwaukee in danger of losing its CART race, Carl Haas was given a long-term contract to organize all racing activity. Working with the Wisconsin State Fair Board, Wisconsin Sports Authority and Miller Brewing Company, Haas was able to save the race and begin a series of improvements.

Shortly after Haas took over, a new front stretch wall was installed and 700 gallons of paint were used to give the grandstand and other structures a fresh look in time for the Miller Genuine Draft 200. A record crowd of more than 43,000 saw Michael Andretti make it two wins in a row with a record average speed of 138.031 mph, driving for the Newman-Haas team. The following year, Haas could again watch his team enjoy success at Milwaukee, when reigning Formula One champion Nigel Mansell sped to his first oval victory en route to the Indycar championship.

The oval track was resurfaced in 1996, together with some minor modifications to the pit lane exit the following year.  This has the effect of widening the turns very slightly, as a small strip of verge was paved over in turns one and two. The track was remeasured and it was discovered that the famed 'Mile' was now in fact 1.032-miles...  The track was remeasured again by the IRL in 2004, who gave the distance as 1.015-miles, a figure generally agreed on to this day. Just to be different, however, NASCAR sticks with tradition and has continued to use the one mile measures for its calculations.

Facility improvements were undertaken by the Fair Board from 2002. Bleacher seats were replaced with all-aluminium seating in the north and south terrace, while the following year saw the construction of a new main grandstand, boasting 25,000 seats with improved sightlines, brand-new restrooms and concession areas.

Further investment was carried out when the road course was widened and resurfaced in 2004, opening up new possibilities for use on corporate events, testing and driver training and for kart racing. Also new was a critical care building which also incorporated the media centre, a resurfaced pit road and new retaining wall, while the original 1960s score tower was replaced by a modern digital display.

The split in Indycar racing saw the Indy Racing League arrive from 2004, giving Milwaukee the short distinction of being one of the few tracks to host both the IRL and Champ Cars in the same year. From 2007, Champ Car events ended as the series concentrated on road courses, leaving just the Indycars to battle it out each year for single seater honours. Milwaukee retained its place on the unified calendar in 2008, but after the Fair Board was unable to find a replacement promoter (having been earlier forced to terminate the contract of the existing promoter), both Indycars and NASCAR were force to look elsewhere for 2010.

Bouncing back under Andretti

In 2011, a new promoter allowed the resurrection of the Indycar event, but a lack of experience and poor marketing led to poor turnout and the future looked bleak, with an announcement that no race race would be held in 2012.

In stepped Michael Andretti, who was determined not to let the event - and possibly the circuit itself - die. His Andretti Sports Marketing team hammered out a new deal with the State Fair Board and set about re-launching the event, this time with proper marketing. Billing it as the Milwaukee IndyFest, The event featured a carnival-like atmosphere, resurrecting some of the ambiance of the days when the race concluded the State Fair itself. Combined with great racing on the track and an exciting win by American driver Ryan Hunter-Reay, the event was a success.

Andretti continues to promote the event which gathers strength, although pressure still exists from some quarters for the State of Wisconsin to "cut its losses" and close the Milwaukee Mile, converting the land for other uses. This has prompted the formation of the 'Save the Mile' campaign group, which since 2008 has been petitioning legislators to ensure that racing continues at the legendary circuit.

The Milwaukee Mile is located in central Milwaukee area of West Allis, within the grounds of the Wisconsin State Fair Park.   The nearest airport is Milwaukee's General Mitchell International Airport, 11 miles away, while Chicago's O'Hare may offer further international options and is 80 miles to the south.

The circuit is located just off I-94.  Entry to the circuit can be found at four of the Fair Park's entrance gates:

Find the best hotel and flight deals near to Milwaukee Mile: