Michigan International Speedway's D-shaped speed bowl in Brooklyn, to the west of Detroit, has been wowing racing fans with its combination of ultra-high speed and frenetic racing from its very first races. Then, as now, it is among the fastest oval courses in America and nearly 50 years of development have kept it as one the country's leading facilities.

The circuit owes much of its current success to Roger Penske, who acquired the circuit out of bankruptcy in 1973 and for more than a quarter century continued to upgrade the facility.  Selling out to International Speedway Corporation in 1999, the track is today wholly-owned by NASCAR , which uses it for a Cup Series Race,  Xfinity Series double-header and ARCA Menards Series race in August.

It began as the central element of one man's dream turned sour for a new network of racing circuits stretching across America. Detroit land developer Lawrence H. LoPatin was the prime mover in establishing the facility, pumping between $4-6 million into the circuit as part of his grand plans. Chosen for its proximity to Detroit and several other cities in the upper Midwest, the circuit occupies a 1,400-plus acres site in the Irish Hills of southeastern Michigan.

Groundbreaking took place on September 28, 1967 and over 2.5 million yards of earth were moved to form the 2-mile medium-banked oval. Charles Moneypenny, who had designed the Daytona International Speedway, was responsible for the design of the oval, choosing 18° banking in the turns, 12° in the curving frontstretch and 5° in the backstretch.

British racing great Stirling Moss was brought in as a track consultant to advise on the design of the road courses, which extended beyond the oval and can be used in combination or separately to the oval and infield courses.

The inaugural race took place on October 13, 1968 when Ronnie Bucknam collected $20,088 as the winner of a 250-mile Indycar race. The prize purse was second only at the time to Indianapolis. The first NASCAR event a year later was full of excitement, Cale Yarborough winning a thrilling duel with LeeRoy Yarbrough.

Cale Yarborough won the first NASCAR race at the speedway on June 15, 1969, in a thrilling duel with LeeRoy Yarbrough. The two drivers battled door-to-door for most of the final 150 laps. On their final circuit, they touched twice-entering turn one, with Yarbrough brushing the outside wall. They then drafted down the back straight, and through turn three. But while coming out of the final turn, LeeRoy Yarbrough spun and crashed just 300 yards from the finish line, handing the victory to Yarborough.

With NASCAR and Indycar events firmly established, the future looked bright. MIS was profitable, benefiting from its proximity not only to Detroit, but also Chicago, Indianapolis, Cleveland, Canada and the entire Midwest. But Lo Patin's dream was to repeat the success in other key markets; his American Raceways Incorporated firm built the Texas World Speedway and acquired a 47% stake in the Riverside, California road course and a 19% share of the Atlanta track with an option to control up to 71% of it. A further new track in New Jersey was also planned as Lo Patin chased his dreams of creating a large fortune from a small one.

Fate – or rather mother nature – was to intervene, however, and the ambitious plans soon began to unravel. Several washouts and postponements of events at Riverside and Atlanta in 1969 contributed to poor ticket sales, while the Texas race unfolded before a paltry 22,508 fans, leading to heavy losses. The planned 600-miler at Michigan was cut back to 330 miles, half of them run under caution due to rain, before the race finally had to be called due to darkness.

Things didn't improve in 1970. Once again the spring Atlanta race was rained out, being run the following Sunday, which unfortunately happened to be Easter. Only 22,000 fans showed up. Both races at Riverside were disasters as well, with a mere 18,500 in attendance for the second race, around a quarter of crowds that had flocked there just a few years before. The June race in Texas was cancelled, supposedly due to the strike at Goodyear, but more realistically due to dismal advance ticket sales.

Add in a spat with NASCAR supremo Bill France Sr over the size of the prize purse ARI was posting for their season ending Texas event and it was easy to see why ARI's stockholders were increasingly nervous. The company was unable to pay a loan payment, nor were they able to post the prize money for the August race at Atlanta and eventually LoPatin was fired. In 1971, the company was forced to seek protection under bankruptcy laws, allowing the track to maintain its racing and testing schedules but by 1972, ARI went into receivership.

Enter another businessman with grand plans for the racing scene – except this time with the nous and determination to succeed. In 1973, in an auction on the Lenawee County courthouse steps, Roger Penske purchased Michigan International Raceway for $2 million. Despite the oil crisis and rising gas prices threatening all of racing, Penske ploughed ahead with improvements, determined to make MIS a premier motorsports facility. He renamed the track Michigan Speedway to better fit with the other tracks in his portfolio.

Under Penske's stewardship, the grandstands were expanded from 25,000 to over 125,000 seats, and numerous buildings were added to the property, including three garages, 28 pit terrace suites, an administration building, two ticket offices and numerous other maintenance buildings. In addition, the outfield road course was retired from racing, becoming a passenger car testing facility used by area law enforcement agencies. Road racing continued on the infield course until 1984.

Over the next 25 years, the continual investment kept the circuit as one of the leading venues. In typical Penske fashion, complaints that the circuit was too bumpy lead to a complete resurfacing in 1986. He even added two racing-related businesses on the Speedway grounds - CompTire and Motorsports International.

In 1997, Penske took his speedways and racing-related businesses public, forming Penske Motorsports, Inc. After building California Speedway (fashioned in the same style as Michigan) the company purchased 45 percent of Homestead-Miami Speedway. In 1998 it added North Carolina Speedway to its portfolio.

Then, in July of 1999, Penske Motorsports, Inc. was purchased by International Speedway Corp. Some 30 years after its founding, Michigan Speedway was finally part of a national group of racing venues; the new group was in fact the largest of all.  The new owners unveiled a new logo in 2000, which put the 'International' back into the track's name once more.

Under ISC, the improvements continued. In June 2010, MIS unveiled its new suite/media centre building along pit road, featuring state-of-the-art accommodations for its suite customers and visiting media members. The road courses too have seen their share of investment, combining with Michigan's Department of Transport to create a comprehensive, reconfigurable network of tracks for vehicle testing and evaluation.

A major repaving project was undertaken in spring 2012, seeing a new surface applied to the oval course and the infield roads. This allowed racing to return to the road course in 2013, when the Western Michigan Region of the Sports Car Club of America held a small programme of events on Memorial Day weekend.

On October 18, 2019 NASCAR announced that it successfully closed its acquisition of International Speedway Corporation, merging its operations into one, new company moving forward. This means that the track is now wholly-owned by NASCAR.

Michigan is the fastest track on the NASCAR schedule due to its wide, sweeping corners, long straightaways, and lack of a restrictor plate requirement. Typically, qualifying speeds are in excess of 200 mph (320 km/h) and corner entry speeds are anywhere from 215 to 220 mph (346 to 354 km/h) following the 2012 repaving.

Planning a visit to Michigan International Speedway? Find the best deals near to the circuit on hotels, apartments and rooms to rent from the map below.

Michigan International Speedway is located south of Brooklyn, Michigan, in the USA.  The nearest international airport is Detroit Metropolitan Wayne County Airport, a 70 minute drive to the east along Highway 12.

Acces by car to the circuit is straightforward, with the circuit located close to several highways.  From Detroit and Ann Arbor, take I-94 to exit 181 and turn onto US12, turning west. Follow US12 until you reach the circuit - signposted on the north of the road.  Please be aware that traffic restrictions may be in place on race weekends - check the circuit website for details.  Tram services are available from the car parks to the various grandstands at each turn on NASCAR race weekends. 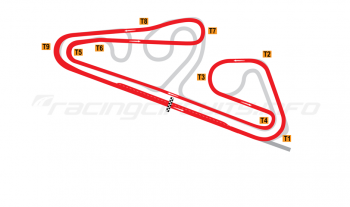 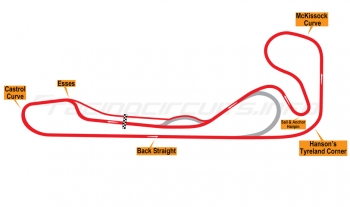 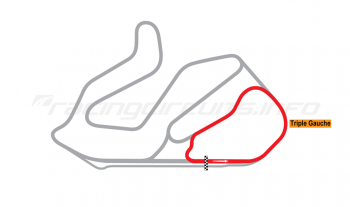