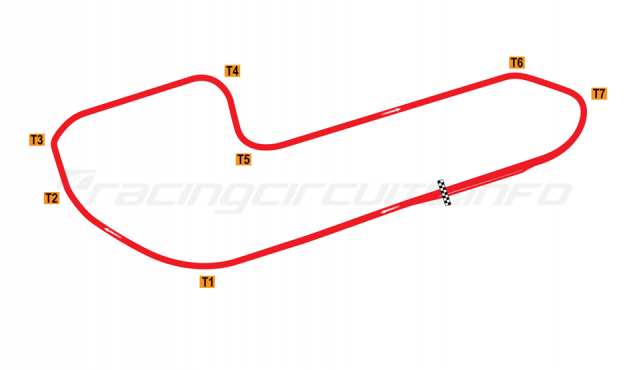 La Junta Raceway is a club racing and testing circuit in in southeastern Colorado, built on a portion of a former military airport. Accordingly totally flat, it is unlikely to set pulses racing to an extraordinary degree but nevertheless offers an opportunity for local racers to enjoy their driving in an area not exactly overburdened by circuits.

Set up in 1935 as a civilian airfield, La Junta was expanded considerably during World War II as a training base, initially for crews of two engined bombers such as the B-25 Mitchell, before switching to the training of replacement heavy bomber pilots in AT-17 Flying Fortress trainers for eventual assignment to B-17 Flying Fortress bombers.

After the war, the base was decommissioned and handed back for civil use to the local municipal government. Several of the runways and perimeter roads were surplus to requirements and it wasn't long before local sports car racers saw the opportunity for fashioning a circuit out of them. A 2.8-mile course was in use by 1955 for SCCA events, increasing in length to 3.1 miles (though sadly details of its exact layout has proved impossible to find) by the time of its last race in the 1960s.

Racing then ceased until 1974, when a much shorter 1.5 mile 7-turn course was fashioned from a portion of disused runway at the corner of the airport. Aside from a pit lane, there are no permanent facilities whatsoever, with even fuel needing to be brought on site for events and testing. The circuit generally hosts around two races per year but is often busy with general testing.  It was resurfaced in most parts in 2015.

La Junta Raceway is located around three miles north of the city of La Junta in Colorado, USA. It is on a disused (by aircraft at least) portion of the Municipal Airport, which caters for general aviation, while the nearest international airport is at Denver, almost three hours' drive to the north. Domestic airports can be found 80 minutes' drive to the east at Pueblo and two hours' drive to the north west at Colorado Springs.

The circuit itself is located on Route 109 (Main Street) about four miles north of US-50 in the Airport Industrial Park of La Junta. Enter at the main Industrial Park entrance and turn left onto Otero Avenue, keeping the golf course to your right. Turn left again at the end of the road, then right on Railroad Avenue, and left again into the track grounds.

Find the best hotel and flight deals near to La Junta: