When it opened in 1989, Heartland Motorsports Park (formerly Heartland Park Topeka) was the first major motor racing facility to be built in the USA for 20 years. Combining a 2.5-mile road course with multiple configurations and an NHRA quarter mile drag strip, the facility was the first of a slew of similar courses that would open across the country in the next few years.

While the facility now is mostly known for its NHRA National event and Country Stampede music festival, it's a recurring stop for many local and national clubs such as the American Historical Racing Motorcycle Association (AHRMA), American Solar Challenge, and local clubs (NASA, SCCA, BMW Club, Porsche Club, etc) with events every weekend from March to October.

Plans for the new facility were first announced in 1987, with ground breaking on the $30 million project beginning in May the following year. By this point, the facility had officially been named Heartland Park Topeka and plans put in place for its opening. On August 12 and 13, 1989, the circuit hosted the IMSA Camel GTP Championships, with an estimated crowd of 25,000 turning out on the Sunday to watch Geoff Brabham win the main race in the all-conquering Nissan ZX-T prototype.

Things certainly looked promising for the new circuit – IMSA was confirmed for another two years, and the drag strip became part of the NHRA tour and soon became the busiest part of the facility. In 1995, the road course joined the NASCAR fray, landing a round of the Craftsman Truck Series, an event it would hold through to 1999. Ron Hornaday won the inaugural race in what was also the first road course to be featured on the NASCAR Trucks' schedule. Trans-Am and the SCCA World Challenge also paid visits in the circuit's early years.

Behind the headline events lay more worrying financial realities – the track wasn't making enough money to fund the continual improvements that all such facilities require. While the drag strip remained a popular part of the NHRA schedule, the road course became something of a neglected cousin. One by one the major series disappeared elsewhere, possibly in part due to the problems of the original course design; with the drag strip doubling up as the main straight, the course could become particularly treacherous in inclement weather as the layer of rubber from the dragsters did little to aid grip.

By the beginning of the new millennium, the track was in financial trouble and there was a serious risk that it might have to close altogether. To the rescue came Ray Irwin, the then-owner of Blackhawk Farms Raceway and a committed road-racer himself. In March 2003 he completed the purchase of Heartland Park Topeka and began some immediate improvements. He remodelled the Heartland Park Topeka tower suites, revamped the drainage system in the staging lanes, resealed and resurfaced the staging lanes behind the HPT corporate tower, poured new concrete around concession areas and laid asphalt on the major pedestrian traffic areas on either side of the corporate tower.

It was also clear to Irwin that one other major piece of work was needed if the track was to be able to tempt new series back. For the 2004 season, the road course and drag strip were fully separated, through the re-routing of the start/finish straight along the line of the original pit lane. The track then rose over a crest (rather uniquely creating a new 'Alpha' Turn in the process) before rejoining the old layout. A new pit lane was constructed alongside the straight. Only the shorter variants of the course were used as the Turn 3 carousel was considered in too poor a condition for racing.

In 2005, Irwin scored a victory by securing a three-year contract to host the SCCA National Run-offs, starting in 2006. The event, which sees the best amateur racers from across the USA come together for a winner-take-all Championship shootout, had traditionally taken place at Road Atlanta and then Mid-Ohio.

In preparation for the event, Irwin secured funding from Topeka City Council to facilitate further refurbishments, including a complete resurfacing of the course. The funds came in the form of Sales Tax Revenue (STAR) bonds, which see the city able to claim back from the state the revenue from sales taxes in a defined area around the circuit. The $15 million renovation completed a new south paddock covering 22 acres, 33 permanent garages, Registration Building, Maintenance Building, and Technical Inspection buildings that also houses complete showers and restrooms for all attendees. A two-story road course Timing and Scoring Tower overlooked the new developments, which also included small revisions to the Turns Alpha/1/2 areas.

The Run-Offs were generally well-received. In 2008, further track modifications were made following feedback from the drivers, creating a faster flowing circuit. Turns 1 and 2 were opened to create an elongated 'S' bend, while the Turn 8 chicane was altered to accommodate different courses for vehicles and motorcycles.

At the conclusion of the SCCA contract, the Run-Offs moved onto Road America, meaning Heartland Park Topeka had to soldier on without its headline road course event. While still remaining a popular SCCA regional and club racing venue, and with top-flight drag races still scheduled, the downturn in world economics began to have an adverse effect. Put simply, the circuit wasn't making any money and losses began to stack up.

By 2014 the situation had become critical, and circuit was at risk of foreclosure by its bank, with considerable debts owing. The 2005 STAR bond issue was also becoming a problem for the city council, since the speedway was supposed to attract new retail development with the increased sales taxes generated by those developments paying off the bonds. These never materialised and only $200,000 was recovered each year instead of an anticipated $1 million. This left the council with an $8 million deficit which the taxpayer would be liable for if the track closed.

The proposed solution was a novel one: another STAR bond would be issued – this time over a much wider area which included a busy shopping mall – releasing the necessary funds for the council to purchase the track from Irwin and pay off the debts. Established tax receipts showed the revised bond area would this time be able to cover the costs. With the state and Irwin's Jayhawk Racing on board with the plan, Topeka City Council agreed the purchase in August 2014, with the intention of subsequently leasing the facility out to an experienced track management company.

The plan has proved controversial, with opponents unhappy at the taxpayer-funded purchase. A group organised a petition calling for a public vote on the deal, though this was subsequently ruled invalid by a Shawnee County judge. The petition organisers had filed an appeal, due to be heard two days before a deadline set by the bank on foreclosure, which was also shot down by Shawnee County judges.

After a mostly dormant year in 2015, one that saw only three drag racing events happen throughout the season, a new ownership group took purchase in the winter of 2015. Chris Payne and Todd Crossley of Shelby Development, LLC. purchased the facility initially before Payne took over sole ownership in 2017. Additionally, a name change was in order and Heartland Motorsports Park was announced in 2018. Since taking over, a flurry of improvements and updates have come across the facility which now boasts a completely redone road course surface, and an immense schedule on all venues.

Heartland Motorsports Park continues to grow with events. The facility that was once considered abandoned by all around it now hosts over 200 event days per year, across the 2.5-mile road course, 1/4-mile NHRA Dragstrip, 22-acre autocross/drift pad, and specialty events like concerts, circus acts, and many, many more.

In 2020, the circuit adopted a new naming convention for it's various courses, with the variants noted by their use of 'Slow' or 'Fast' versions of the corners at Turns 2 and 8.  In addition, Turn 0 was re-named as Turn Alpha.

Planning a visit to Heartland Motorsports Park? Find the best deals near to the circuit on hotels, apartments and rooms to rent from the map below.

Heartland Park Topeka is located just south of Topeka in Kansas, USA. The nearest international airport is at Kansas City, around 80 miles / 1 hour 15 minutes drive from the circuit, though Topeka Regional Airport at Forbes Field is immediately adjacent to the track for private and non-scheduled flights.

By road, the circuit is a short distance from I-75 on Alt-75, just south of the city of Topeka. From Kansas City, take I-70 (Kansas Turnpike) to South Topeka Exit 177. Take an immediate right to Highway 75/SW Topeka Blvd South and travel approximately five miles south to SE Gary Ormsby Drive, from where the circuit is signposted. 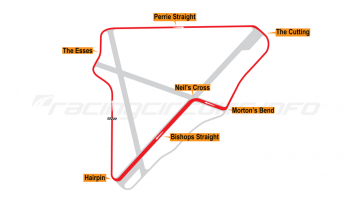 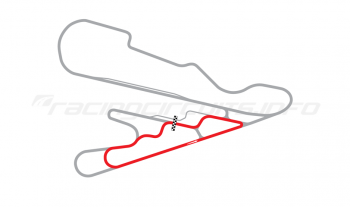 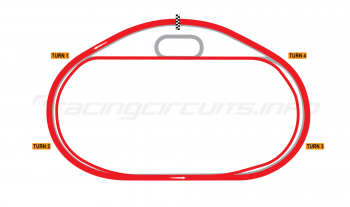