After a period of uncertainty where closure looked a distinct possibility, World Wide Technology Raceway at Gateway, Illinois, is now emerging as success story under new ownership, with a roster of high-profile events bringing the crowds back once more.

NASCAR Camping World Truck Series races were first to return, alongside the IndyCar Series from 2017 onwards.  Now the NASCAR Cup Series will be the highest profile event, alongside its programme of NHRA-sanctioned drag racing events.

Outside of racing, the circuit is expanding into new avenues to develop its business, with a two-story conference centre being added to the infield of the oval track. Gateway is also adding more opportunities for car enthusiasts to participate in racing activities. Its Gateway Challenge events put individuals and corporate groups behind the wheel of new Chevrolet SS Camaros with full driving instruction and competitive action.

It's a remarkable turnaround for a track that was once just months away from disappearing for good.

The current oval and road course dates from the mid-1990s, but that is not the beginning of racing in the St Louis. Drag racing first emerged in 1967, when Wayne Meinert developed the original St. Louis Raceway Park as a simple, 1/8 –mile strip. Four years later, the addition of more land allowed the raceway to grow to a full quarter-mile, at which point the facility was re-christened St. Louis International Raceway.

Drag racing was the staple entertainment through the 1970s and into the 1980s but soon demand increase from road racers, who wanted a local facility to enjoy their branch of the sport. In 1985 they got their wish, when a new 2.6-mile course opened on the grounds, incorporating the drag strip and part of the shut-down area along its length.

The course was flat but fairly fast and soon became host to a variety of road racing series, Trans Am Series, Can-Am and a variety of Sports Car Club of American (SCCA) regional and national events. A 1/20-mile dirt oval also opened in 1985 to cater for another popular branch of the sport. A new name - Gateway International Raceway – was adopted from 1988 onwards.

For the next 10 years the track carved out a good, if largely unremarkable existence, but in 1995, the facility was purchased by former Long Beach Grand Prix promoter Chris Pook, who had big plans to create a new oval course to capture Indycar and NASCAR races. Almost immediately demolition began on all of the courses, as his vision for a new speedway oval and infield road course took shape. Alongside would be a separate NHRA-sanctioned drag strip. A shortened version of the road course remained in use for part of 1996 while construction took place elsewhere.

The new tracks were complete in time for the 1997 season. The oval was an unusual egg-shaped affair, with one end a much wider radius-turn than the other, though both featured 11-degree banking. The infield road course was a mile shorter than the one it replaced and perhaps less of a challenge, but would nonetheless cater for club and regional racing perfectly adequately.

The first major event held at the facility was a CART ChampCars race on Saturday, May 24, 1997. This was at the height of the CART/IRL wars and was held a day prior to the Indianapolis 500, with Penske driver Paul Tracy running out the victor as the series embraced its first Memorial day weekend outside of Indiana.

One month later the National Hot Rod Association hosted its first-ever National Event at the venue to a near standing-room only crowd. Joe Amato (Top Fuel) and Ron Capps (Funny Car) became the first professional category drag racing champions at Gateway and created an event that has continued to be one of the most popular on the championship tour.

In July 1997, the first-ever NASCAR event was held on the 1.25-mile oval. Elliott Sadler wrote his name in the record books as the first of 15 NASCAR Nationwide Series event winners at Gateway between 1997 and 2010. The first event proved exciting to the fans with 14 cautions and 15 lead changes in what remains the longest NASCAR race ever contested at Gateway at 300 miles.

NASCAR increased its presence in St. Louis with the addition of the Camping World Truck Series in 1998. The unique shape and banking of the facility proved perfect for the Truck Series with a pole qualifying speed of 131.218 mile per hour and a hotly contested race that saw Rick Carelli become the first of 13 truck series winners between 1998 and 2010.

In 2010 Dover Motorsports, Inc., who had earlier purchased the facility from Pook, hosted two Nationwide Series at Gateway following their closure of Memphis Motorsports Park. However, crowd figures proved disappointing and the Dover group, citing their inability to run the operations with acceptable returns, officially announced that Gateway was officially closing and ceasing operations on November 3, 2010.

Just under a year later, retired race car driver and real estate developer Curtis Francois announced he had purchased the 160-acre facility and would open it for the 2012 season. With one of the largest racing schedules in the track's history, Francois rebranded the track as Gateway Motorsports Park, to better reflect the diverse motorsports events and activities planned for the future.

An important key to reopening Gateway was the commitment to drag racing and the partnership with the National Hot Rod Association (NHRA). Francois inked a long-term deal with the NHRA starting with a signature event in September 2012, which was a tremendous success. In November 2013, Gateway MSP and NASCAR announced the return of the NASCAR Camping World Truck Series for the 2014 season.

Shortly after this Gateway underwent an $11.5 million revitalisation project, which has saw the facility expand to more than 200 acres, with the addition of a world-class karting facility, improved grandstands and a new fan pavilion.

In October 2016, it was announced that the Verizon IndyCar Series was returning, with the Bommarito Automotive Group 500 scheduled for August 2017. Prior to this a test was organised in May 2017, during which teams complained of difficulties with the track surface.  In response the track committed to a full repave of the oval, which began in mid June and was completed by late July.  The new surface got universal praise when the IndyCar drivers returned for a further test in early August. “It’s smooth like a baby’s bottom,” three-time Indianapolis 500 winner Helio Castroneves said after his first run.  "It’s a night-and-day change."

In 2019 naming rights were acquired to the facility by World Wide Technology, and the re-named World Wide Technology Raceway is now the largest outdoor entertainment facility in the region. A new 2-mile road course was also developed for the 2019 season, though the older 1.6 mile course remains in use. Designed by Tony Cotman, the track enhancement creates a dynamic course configuration for the Formula Drift Series.

For 2022, the circuit brings in another major race, with the announcement that the NASCAR Cup Series will make its first ever visit to Gateway, with 5,000 ticket reservations selling out within 24 hours of the announcement being made.

Planning a visit to World Wide Technology Raceway at Gateway? Find the best deals near to the circuit on hotels, apartments and rooms to rent from the map below.

World Wide Technology Raceway is located in Madison, Illinois, across the Mississippi River from St Louis, Missouri, USA. The nearest airport is Lamber-St Louis International, around 18 miles or 21-minutes' drive along I-70.

The circuit is located just outside St Louis itself and across the State line in Illinois, though is just a few miles from the downtown area of the city. By road, the circuit can be reach from the downtown area by taking I-70/I-64 East, then merging onto I-55 North/I-70 East. Take the IL 203 North exit to the first stoplight at Ohio and then turn left into the track.

From the airport, take I-70 East across the Stan Musial Veterans Memorial Bridge. Continue east on I-70 (do not exit at I-64 East) and merge with I-55 North. Take the IL 203 North exit to the first stoplight at Ohio and then turn left into the track. 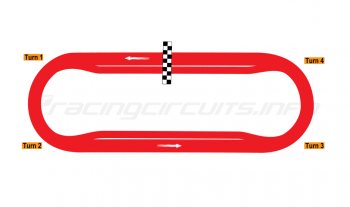 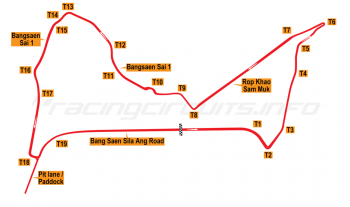 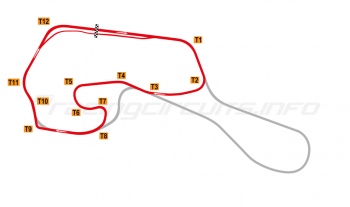