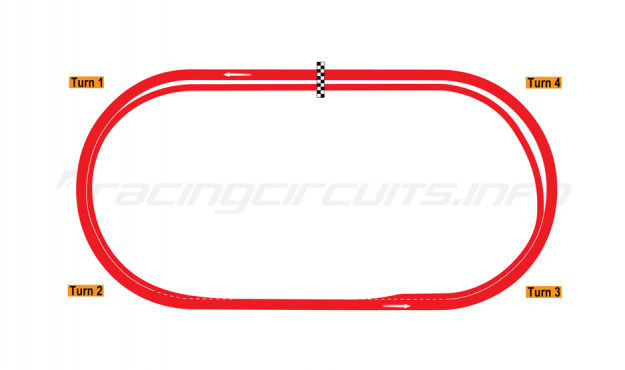 Dover International Speedway is nicknamed the 'Monster Mile' for good reason; this is a short track which bites the unwary. Drivers find themselves almost constantly turning through the high banking, with only around three seconds respite on the two straights. A moment's inattention can quickly turn to disaster.

The circuit is unique in having been conceived from the outset as a dual-purpose horse and motor racing facility, with a harness racing track on the infield. The Melvin L. Joseph Construction Company, Inc began work on the site on the northern outskirts of Dover, Deleware, in 1966. Construction on Dover Downs International Speedway, as it was then known, was completed three years later. The first event on the new one-mile, asphalt speedway was a NASCAR Cup race, the Mason-Dixon 300 on July 6, won by Richard Petty.

Unusually, the speedway had orignally been conceived with the start/finish area on the back straight, as this was in front of the innovative air-conditioned grandstand. However, according to track historian George Keller, when the spectators who had paid extra for the comfort of cooler seating realised they were not going to get a view of any pit stop action, there was nearly a riot... For subsequent years, the start/finish was moved to its present location.

During the 1971 racing season, the speedway removed all the events not sanctioned by NASCAR to help keep focus on the spring and fall Cup races. Gradually, further NASCAR events were added, with a Nationwide Series event in 1982, followed by a second each year from 1986. The Truck Series was added during the fall 2000 race weekend, and since then has been a Friday staple of the spring race weekend. The final series to run regularly in Dover, the NASCAR K&N Pro Series East, first appeared at the track to run a July 1998 race. It was later added as the annual Friday race of the fall weekend beginning in 2001. Apart from a brief flirtation with the IRL Indycar Series in 1998/99, Dover has remained a NASCAR only venue throughout most of its life.

Seating capacity at Dover has been greatly expanded over the years. A modest 3,200 addition to the 10,333 seat main grandstand took place in 1986 and expansions continued year-on-year until 2001, when the total capacity peaked at an amazing 135,000 seats, the largest of any mid-Atlantic sport's stadium. Other facilities were also built up, not least the hotel, casino and slot rooms which sprang up after such facilities at horse racing venues were legalised by the state in 1994.

Another significant change came in 1995, when the asphalt track surface was torn up and replaced with concrete, gaining the track a short-lived additional moniker of 'White Lightning'. A revised pit entry was introduced the following year, with wider slowing down and speeding up lanes installed on the aprons inside the banked turns.

After the gaming side of Dover Downs separated, Dover Motorsports, Inc. was created to operate the speedway, which was renamed Dover International Speedway in 2002. The harness racing, slots operation and newly-built hotel onsite retained the Dover Downs name, now known as Dover Downs Hotel & Casino.

Two years later, the speedway announced the completion of the Monster Bridge, a unique glass-enclosed structure that has 56 seats over the third turn, creating the 'most exciting seats in sports', according to the marketing rhetoric.

In 2006 Dover announced plans for the 'Monster Makeover', a multi-year capital improvement project which would see the creation of a new skybox complex and luxury suites, upgrades to grandstand seating and a new media centre completed during phase one, in time for the 2007 spring races.

The 2008 season marked Dover International Speedway's 40th anniversary. The second phase of Monster Makeover construction included the addition of the 46-foot Monster Monument at Victory Plaza, a larger-than-life fibreglass sculpture of the track's signature icon, Miles the Monster. The structure also includes more than 200 granite plaques dedicated to race winners and legendary drivers at the Monster Mile. Other construction projects included the expansion of the FanZone display area and the addition of a new emergency services building outside of Gate 1.

The third phase of Monster Makeover construction focused on pit road, including a new 1,592 foot concrete pit wall equipped with SAFER barrier technology. The new space made way for a 43rd pit stall and enabled the track to lengthen all stalls by four feet, creating an easier entrance and exit for the cars while pitting. By eliminating all grass on the frontstretch and some in Turn 4, the new pit road wall was set four feet closer to the apron of the track, creating a wider pit road.

In an unusual move, track operators announced in December 2011 that they would be reducing the general seating capacity in a two year programme to improve spectator comfort by installing wider seats. Capacity was reduced in phases from 140,000 to 113,000 by 2014.

Dover International Speedway is located in central Delaware within the city limits of Dover.  The nearest major airports are at Philadelphia (68 miles), Baltimore (82 miles) or Washington D.C. (97 miles).

The circuit is easily reached by car, being located on the northbound side of US Route 13, a/k/a N. DuPont Highway, the major north/south dual highway in Delaware.  Parking is available on site (for a small cash fee on NASCAR weekends - check the circuit website for details).  With 100,000+ fans attending NASCAR events, roads do become busy, so plan ahead and set off early to ensure you arrive in time.   A park and ride facility also operates on race weekends from the Blue Hen Corporate Center (12 minutes away) and Christiana Mall’s North parking Lot in Christiana, Delaware.

Find the best hotel and flight deals near to Dover International Speedway: