Continental Divide Raceways is one of the USA's great lost motorsport complexes, which shone brightly for a decade before beginning a long, slow decline towards closure and demolition. At its height it was the finest facility of its kind in mid-America and, quite possibly, the entire USA, and hosted some of the country's biggest categories.

With the Pike National Forest and the Rocky Mountains providing a dramatic backdrop, the circuit sat on 65 acres of scrubland in an ideal spot alongside Interstate 25, roughly halfway between Denver and Colorado Springs and two miles south of the small town of Castle Rock. Originally it was due to be part of even more ambitious plans, which would have seen a multi-sports complex established on the site, complete with hotel, airstrip and even a dam intended to create a manmade reservoir.

In the end, it was 'merely' a fine road racing complex, boasting a road course, drag racing strip and half-mile oval.  Sadly, the track succumbed to the developer's bulldozer - though with no properties ever built on the site, it seems to have been more of a speculator's forlorn dreams that brought racing to a final halt.

Announced as the Columbine Sports Center with a ground breaking ceremony in 1956 , the project was the brainchild of Colorado Motor Raceway Inc., who were keen to create a spectator venue for all of the major sports, including the burgeoning motorsport market. Perhaps inevitably the funds required for such a major undertaking never fully materialised and by 1957 the company had gone under, leaving behind unfinished plans and a few dirt roads around the site.

It was on these dirt roads that the first motorsport event actually took place in 1958, when a hillclimb was organised, drawing a sizeable crowd. It may well have been this event that persuaded Denver millionaire Sid Langsam that there was a future in the unfinished complex after all. Langsam bought out Colorado Motor Raceway Inc.'s stocks in March the following year and quickly set about bringing the plans for the motorsport element to reality.

After a swift construction programme, the half-mile drag strip was the first to open on July 19, 1959, when a crowd of 8,600 fans flocked to watch the opening drag race. With 250 entries, it was clear that Langsam had tapped into something exciting. The road course followed just 19 days later, stretching over 2.66 miles and using the drag strip for its main straight and also incorporating a half-mile oval.

The finished result was challenging and entertaining - for both drivers and spectators. Mario Andretti reputedly held Continental Divide among his favourites, while the crowds enjoyed unparalleled views of the whole course on the huge grassed spectator banking which overlooked the pits. A 5,000 seat concrete grandstand was added in 1960, further boosting the amenities.

The first event on the road course was a sports car race on August 8 and 9, 1959. Road racing and drag events tended to play out on alternate weekends and initially there was no shortage of series wishing to race at the new venue. The Continental Divide 100 was held as part of the USAC Road Racing Championship in 1960, Carroll Shelby taking the victory, with Bob Holbert and Ken Miles emerging victorious in subsequent years. SSCA and USAC Stock Car events were also held, Parnelli Jones winning the latter in 1964.

In 1965 the whole of the metro Denver area was badly affected by a 100-year flood, which saw 14 inches of rain falling on June 16 alone on the area south of Castle Rock. A wall of water cascaded through the area up to a mile wide in places, sweeping away all that stood before it. Continental Divide Raceways suffered widespread damage, with even the timing tower on top of the spectator banking being swept away. Nevertheless, the track was soon patched up and back in business, attracting new championships once more.

In August 1967, the Trans-Am series made its Continental Divide debut, when a host of legendary drivers took part, including Mark Donohue, George Follmer, Jerry Titus, Peter Revson and Dan Gurney. Titus took the victory in a Shelby Mustang. By 1968 Langsam and track manager George Fabry had improved the facility to the point that USAC included it on the Indycar schedule. The Rocky Mountain 150 ran for the first time on July 7, 1968, drawing 10,000 spectators who saw A.J. Foyt beat a field that included Mario Andretti, Al and Bobby Unser as well as Gordon Johncock. Trans-Am also returned, this time with Donohue taking the win.

Tragedy sparks the beginning of the end

It looked like the circuit was approaching its zenith, but tragedy was soon to intervene. During the 1969 Denver Post Grand Prix, which was for SCCA Formula A cars, local racer Jim Mulhall was driving a Shrike when a downpour soaked the track. As he ran along the pit straight, his team signalled for him to pit next time by; Mulhall lifted his hand from the wheel to acknowledge the call, only to hit a pool of water and aquaplane out of control. His car struck a row of 55-gallon oil drums which formed the pit wall at around 155mph, sending them flying in all directions (some had mistakenly been left empty rather than water filled). A horrific scene quickly unfolded. Mulhall suffered severe head injuries when the retaining wire holding the barrels together snapped and struck his helmet, while all hell broke loose in the pit area. Mulhall died on the way to hospital; mechanic Michael DesJardins died later after being struck by an errant barrel and two others were also injured. The ensuing lawsuit was settled by the SCCA's insurer, but Langsam was horrified by the events and seemed to lose his passion for racing.

The 1970 season nevertheless saw the track's highest-ever attendance at the Indycar race, when 20,000 watched on as Mario Andretti won the Rocky Mountain 150. It would prove to be the last race of its kind, however, with USAC increasingly turning its attentions to oval racing and sponsors wanting the better exposure that oval racing offered on television.

Soon after, Langsam was diagnosed with terminal cancer and the writing seemed on the wall for Continental Divide Raceways. First to go was the drag strip, though the estimated 15,000 that turned out to watch the July 30 event in 1972 didn't appreciate they were witnessing the final piece of drag history at the venue. The highlight was a demonstration by Evel Knievel, who successfully jumped 11 parked cars on a Harley-Davidson motorcycle.

The road course was next to close in 1973 on Langsam's death, with many attributing his illness to a broken heart over the the 1969 crash.

New owner attempts to find new use but end is near

For several years the facility lay fallow, until in 1978 it was purchased from his estate by Unique Mobility Inc, a manufacturer of electric vehicles. The facility re-opened as CDR Tech Track and, for a while at least, it looked like it might be a viable proposition once again.

The new management tried hard enough, initially with club racing filling the bill before the NASCAR Winston West Series was attracted for the Coors 200 in August 1982. Rick McCray won what turned out to be the last professional auto race at the circuit.

Real estate developers had however been circling for some time as Castle Rock expanded steadily southwards and the pressure to sell eventually became too much. In 1983 the whole site was sold for housing, with the bulldozers moving swiftly in to demolish any trace of the circuit to prevent any possibility of it ever re-opening. Ironically, a few access roads and a grand sign announcing the housing development were all that were ever built - even today the plot stands empty.

A vague outline of the course is still visible in aerial photographs, but on the ground there is very little to suggest that this was ever the Mid-West's premier racing facility. Many in Castle Rock are completely unaware of what was once on their doorstep but thankfully the local museum now has a small display dedicated to Continental Divide's all too brief racing history.

Nothing now remains of Continental Divides Raceway, although the empty roads of the never-developed housing estate still remain, built over the site of the obliterated track which has now all but returned to prarie.  The track was located 2.5 miles south of Castle Rock, alongside Interstate 25.  Turn off at Territorial Road and Dawson Ridge road (the entry to the proposed housing development) is off to your left.  This spot roughly marks the Turn 3/4 section of the old road course, with Territorial Road being the old entry down to the paddock area used by competitors and officials.

If you are in the area, why not pop into the museum run by Castle Rock Historical Society at 420 Elbert St, which has a small display about the circuit (remnants from an earlier, larger exhibition).  The museum is open Wednesday through to Saturday each week. 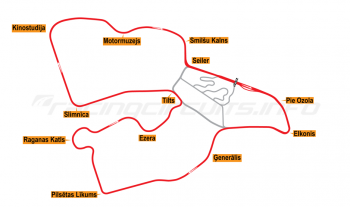 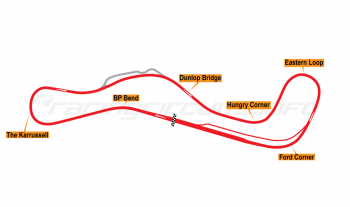 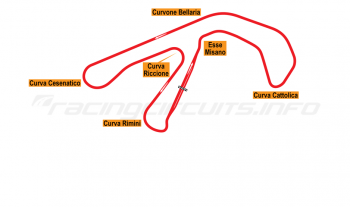