The Caesar's Palace Circuit was a short-lived flirtation with the world of racing by the high rollers of Las Vegas, built in a casino car park and rather unfondly remembered by all concerned.

Supposedly a rival for California's Long Beach Grand Prix, it was never a big hit, despite hosting Formula One title-deciders for two consecutive years, before switching to the more familiar territory (at least to American eyes) of Indycar racing.  Even then it was a relative flop, lasting just two further races before the casino bosses grew tired of motorsport and the race was consigned to the history books.

While the casino and hotels owners (and if the rumours are to be believed, Las Vegas mobsters) had flirted with motor racing in the 1960s at Stardust Raceway, that had long since faded away and been developed on. By the early 1980s it was the rising glamour of Formula One racing, promoted by team boss Bernie Ecclestone, that caught the attention of the bosses of Caesar's Palace. The reasoning was simple; host a world class race and the money would surely come in as the big spenders flocked to enjoy the spectacle.

A deal was actually struck for Las Vegas to feature as the final stop of the 1981 series, following a week after the race at Watkins Glen. But when the upstate New York track fell into financial difficulty and failed to pay monies owed to the teams from the 1980 race, it was dropped from the schedule, giving the Caesar's Palace event even greater prominence.

The season finale should have proved an exciting end-of-term affair for the drivers and team personnel alike. Personnel were booked into the main hotel to enjoy the trappings of grandeur, lounging by the pool or taking their chances at the casino tables. Many did, though as ever, the house generally ended up the richer for it.

Sterile layout according to the drivers

The opulence of the venue was not matched by the circuit itself, crammed as it was into the parking lot out the back. Flat as a pancake and forced to twist back-and-forth on itself because of the restricted size of the plot of land, it did at least offer good views for the spectators, at least for those prepared to brave the Nevada sun to sit in uncovered grandstands. Photographers and journalists were less pleased, with very restricted access to the infield, such was the layout.

Perhaps by modern standards it wasn't that bad - certainly there have been considerably worse layouts for temporary tracks, as Formula One's next few ventures around the USA would prove. It even had some reasonably fast sections bordered by sandy run off areas, but the slow switchbacks proved a repetitive bore. However, the lack of reference points amid the concrete canyon of walls was always likely to make it tough to find a rhythm, while the beating heat and unusual anti-clockwise layout was punishing for the drivers after a long season.

"You had this totally flat ground and three foot high concrete barriers so you had very little sense of reference points. It was probably the least appealing Grand Prix circuit I think I've raced on," former racer John Watson remembers. Reigning World Champion Alan Jones was typically forthright at the time, calling it "a goat track flattened out". That probably didn't go down too well with the casino owners...

Nevertheless, the sporting prospects looked good. The Formula One circus arrived with the title to be decided and three drivers in a shoot-out for the ultimate prize. Williams driver Carlos Reutemann headed the roster, with Nelson Piquet a point behind for Brabham, with Ligier driver Jacques Laffite an outsider's bet.

The race was - in retrospect - a little disappointing, even if it did have plenty of drama. Jones, despite his antipathy towards the track, simply cantered off into the distance to score what was to prove his final Grand Prix win in commanding style. Behind him there was plenty of jostling for position as cars broke, the heat got to the drivers and fortunes wavered back and forth.

Reutemann had a particularly anonymous race given his teammate's dominance, fading away out of the points and out of the championship hunt, with Piquet doing just enough to scrape home to a first title. The effort in the heat proved almost too much for the Brazilian to bear and he needed to be carried from his car at race's end.

The following year's race threw up another title fight, after a tragic season which meant the contenders would not have been the same as those predicted at the outset. Williams again had one driver in the fight, though this time it was in the form of Keke Rosberg, drafted in when Jones walked away from the sport. McLaren's John Watson was the other driver still in the title hunt, albeit always as more of an outside shot.

The Renault turbos of Rene Arnoux and Alain Prost were the fastest around the course, though the tortuous layout of the track meant the normally-aspirated cars were at less of a disadvantage. Michele Alboreto's Tyrrell qualified third, while Eddie Cheever put his Ligier fourth on the grid.

The race did at least develop some good battles: Niki Lauda battled side-by-side with Andrea de Cesaris for four corners as they jostled for seventh, while Alboreto and Prost duelled for the lead after vibrations set in for the Renault man, forcing him to slow. Alboreto sailed past to take his first and Tyrrell's penultimate-ever win.

Dawn of the 'modified oval'

It's fair to say Formula One never really settled in Vegas. Truth be told, the city was in a state of slightly faded glamour in the early 1980s, trading off its 1950s heyday and waiting for the developments in the 1990s that would see it become the entertainment centre it is today.

After two years of poor crowds and with the high rollers not arriving in mass numbers as predicted, the finances didn't look good for the Caesar's Palace bosses, so a parting of the ways with F1 was perhaps mutually agreeable. The grand prix circus departed for the likes of Dallas, Detroit and Phoenix - all equally questionable as street circuits go - before finally settling at Indianapolis and Circuit of the Americas in recent times.

The withdrawal of the Formula One stars did not mark the end of the story, however. Caesar's Palace had a further throw of the dice and decided to try its hand with Indycar racing instead. This at least had the advantage of being a more familiar series to American eyes, complete with household names such as the Andrettis and Unsers. Street courses were a relative novelty for the still predominantly oval series and it was felt that some changes would need to be made in order to make the Indy crowd feel more at home.

The layout was tweaked to remove all of the infield loops, creating what was said to be a 'modified oval', though there was much debate as to what the resulting layout actually constituted. While it featured fast curves and concrete walls like an oval, it still retained the sand traps of the original layout and had two hard-braking corners onto and off the start-finish straight.

"I really think it is a road course," said John Paul Jr, who qualified on the pole. "Any time you have to down-shift and heel-and-toe, the art of road racing, I really do feel this is a road course. The track is very difficult, you can't see around the corners and they're all blind and it's all flat; there's no banking to it whatsoever. It's very challenging. It's a fun place to drive but you have to be very precise."

Despite taking an early lead, John Paul Jr. was unable to fend off Mario Andretti in the 1983 race, despite a lockup by Andretti which briefly let Paul Jr past. A thrilling dive down the inside in the final laps at the final turn sealed the win for Andretti.

For the following year's race, the final turn's exit was widened out by five feet by moving the outside wall back, which while making no significant difference to the layout, saw lap speeds tumble. Tom Sneva and Mario Andretti were vying for the title and for the win. It was Sneva who took the chequered flag at a record place for Teddy Mayer's team but it was Mario Andretti who came home second and took the series win.

That, however, was the final race run on the course. Caesar's Palace had lost interest in motorsport and the site was soon transformed beyond all recognition. First the Polynesian-themed Mirage casino resort was built on one end of the course and later the remainder was ploughed under to make way for an extension to the main hotel and an upscale shopping centre. Few who walk its glitzy malls today would have any idea of its former past.

The Caesar's Palace Grand Prix circuit was located in the parking lot of the Caesar's Palace Casino in Las Vegas, Nevada, USA. Today all signs of there ever having been a race here have been completely obliterated by the developments in the late 1980s and 1990s which restored a lot of the glitz to The Strip. 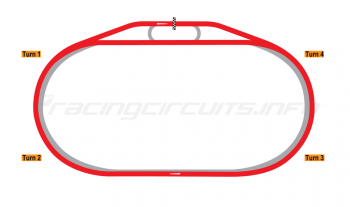 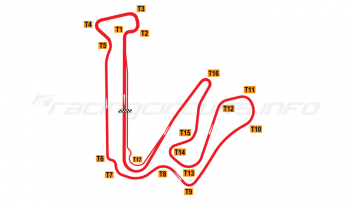 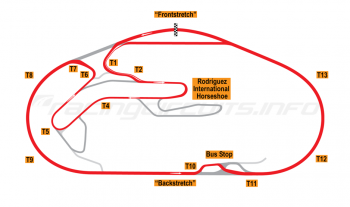