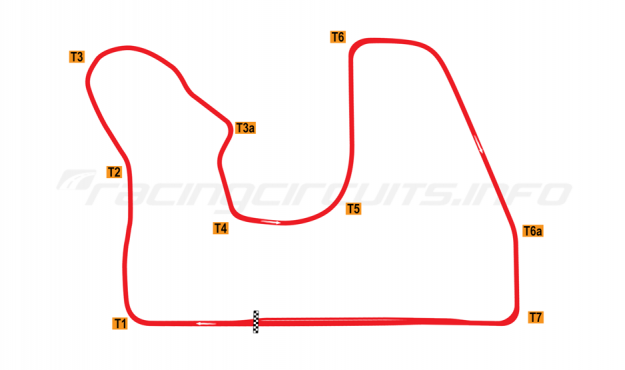 Blackhawk Farms Raceway has been going strong for almost half a century, becoming a favorite of many local and national race organisations. Despite never hosting any signficant top level races in its history, the circuit has nonetheless seen a selection of star drivers negotiate its turns at different stages of their careers; various of the Andrettis, Boris Said, Paul Newman and Stirling Moss, have all competed here, as has F1 champion Alan Jones.

The circuit was built in 1967 by Tito and Marcia Nappi on a 219 acre farm just west of South Beloit. The original track layout was designed by local racing legend Jerry Dunbar, who came up with a short but technical track which had some similarities to its much larger near neighbour, Road America. The "family" atmosphere of the facility is one of its most endearing features.

Mike and Raymond Irwin bought the facility in 1986 and made many improvements over the next 20 years, including renovating many of the buildings, and resurfacing the track itself several times. In 1992 a new chicane was added on the stretch between after Turn 3, to compensate for the lack of run-off at the following Turn 4.
Mike Irwin retired in 2005, after which Raymond assumed operations with the help of Paul Depirro and Cindy Robinson. Raymond Irwin also owned and operated Heartland Park Topeka in Topeka, Kansas, during this period.

In August 2007 the circuit changed hands again, passing on to Paul Musschoot, a local businessman and longtime SCCA racer and technical inspector. In 2008, many improvements were made to the track site including a brand new tech building and bathroom facility. Additional improvements included reducing the property's water table with added drainage and an onsite Frisby Performance tire dealer.

The track currently hosts events for the Midwestern Council, SCCA, VSCDA, and SVRA.

Blackhawk Farms Raceway is located close to South Beloit on the border between Wisconsin and Illinois. It lies within 90 miles of two major metropolitan areas; Chicago and Milwaukee and is minutes from interstate 90. The nearest major airport is Chicago Rockford International Airport, 30 minutes' drive to the south, while Chicago O'Hare is 90 minutes away. Blackhawk Farms Airport is located right on the track grounds, offering easy access to small planes capable of using a grass runway.

From Chicago, take I-90 west towards Rockford and then north towards South Beloit. Take exit 3 and turn left onto Rockton Road. At the intersection with IL-251N, turn right and head north to lights and turn left onto Prairie Hill Rd. Left turn at the stop sign onto S. Bluff Rd and Follow the signage to Blackhawk Farms Raceway.

Parking is available on the infield - follow the entrance road to the one and only course crossing and then continue to the parking areas.

Find the best hotel and room deals near to Blackhawk Farms: