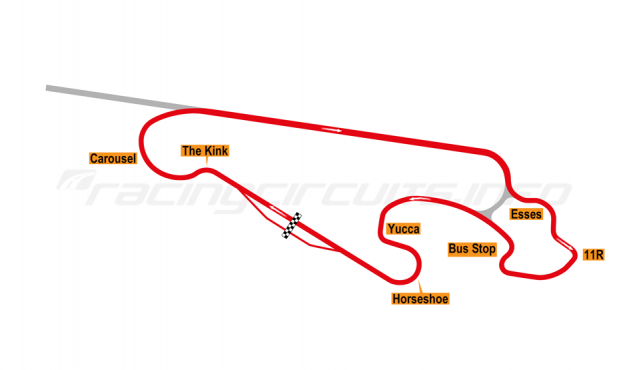 Arroyo Seco Raceway is one of only two permanent road courses in New Mexico and as such has become a popular club racing facility. Opened in 1998 and originally known as Arryo Seco Motorplex, the circuit boasts 1.4-mile and 1.1 mile options which can be run in either direction. The shorter of the two courses deletes the esses and chicane, but the longer circuit is generally preferred for racing and testing.

Built out in the desert, Arroyo Seco is a flat but fairly rewarding drive, with the added bonus of having virtually nothing of note to hit if you venture off-track. Along with competitive hire rates, this has helped to make it a popular testing venue.

The majority of the racing action coming on two wheels, with a full programme of events organised by ASMA - the Arroyo Seco Motorcyclists Association. Superlap or Timed Attack events comprise the bulk of the four-wheeled action.

The facility is completed by a quarter mile drag strip, which doubles as the back straight for the road course, and a motocross track on the infield. Drag racers commend the well-kept surface but warn that the lack of a run-down area means coming to a stop before the tarmac ends is definitely a priority!

Arroyo Seco Raceway is located at Akela Flats, close to Deming, New Mexico. El Paso International Airport is closest for longer distance travellers - but still a good 90 minutes' drive away across the state line in Texas. Tucson International Airport is an alternative but even farther away at more than three hours by car. Grant County Airport near Silver City is the closest facility, with a handful of passenger flights to Phoenix and Alberquerque.

The circuit, while in a fairly remote location, is handily located right alongside Interstate 10, not quite halfway between Las Cruces and Deming. Take the Akela exit (102) then take a right onto Hwy 549 towards deming. After a short drive, the circuit parking lot entrance is the first on the left.

Find the best hotel and room deals near to Arroyo Seco: