The Autódromo Internacional Miguel E. Abed, formerly the Autódromo de Amozoc, is one of Mexico's premier racing circuits and only the second to receive an FIA homologation. Host of NASCAR Mexico and the 24 Hours of Mexico on several occasions, the circuit has also seen international competition, with races for the WTCC in 2005, 2006, 2008 and 2009.

Located in central southern Mexico in the State of Puebla, the circuit is owned by the Abed brothers, the same family who traditionally promoted the Mexican Grand Prix at the Hermanos Rodriguez circuit. Today's multi-use oval and road course is a far cry from its more humble road course beginnings, though traces of the original circuit can be found in parts of the current infield course.

In 2021 the circuit was a stop-gap host for the Formula E Mexican E-Prix, due to the Autódromo Hermanos Rodríguez being used as a temporary hospital for COVID-19 patients

The facility first opened in 1985 as a 0.882 miles (1.420 km) road course, built by the Promotodo concern (organisers of the Mexican F2 and Marlboro Cup series in the 1980s and '90s) and then later sold to the Abeds. It became a mainstay of the Formula 3 series and was at once stage renowned as having among the best track surfaces of any circuit in Mexico.

An ambitious redevelopment plan saw the road course bulldozed to make way for an oval circuit in 1995, but plans to complete an infield course came to nothing and the circuit faded from view.

However, new investment led to a complete redevelopment in 2005, with the oval course now finally being supplemented by an infield road course and much-improved pit and paddock facilities, grandstands and access roads. The result was the circuit's first international race, when the World Touring Car Championship came calling in June, though this was in doubt right up until the final minute as work was hurriedly completed on the circuit revisions.

The tight and dusty infield course was not to everyone's liking and there were several large accidents, including one which put Jörg Müller's BMW out for the weekend. Wins went to the Alfa Romeo of Fabrizio Giovanardi in race one, with Seat's Peter Terting taking what would prove to be his first and only win in the championship in race two.

Concerns over the proximity of some of the walls on the infield course and a general desire to open up some of the portions of the course for overtaking led to further changes to be made for 2006. The Turn 4-5-6 section was bypassed in favour of a new loop which reinstated the oval course's banked Turns 1 and 2, before rejoining the infield course. The former Turns 7 and 8 now became Turns 8 and 9, with a slightly re-aligned route to provide additional run-off. The rest of the track remained unchanged.

Unfortunately, the new track surface was laid just days before the WTCC race and, almost inevitably, broke up badly under the heat of competition, such that drivers were forced to drive on the kerbs as far as possible and cars came back to the pits looking like they had been shot-blasted from the flying gravel. Many of the drivers were vocal about the general unsuitability for racing, but the event organisers persevered as best they could. Alfa Romeo took both wins with Salvatore Tavano and Augusto Farfus.

The poor track conditions prompted the FIA to step in and give circuit bosses a deadline to make amends if the WTCC to return for 2007. The December date came and went and so Puebla was dropped and replaced by Zandvoort while the works were completed to the FIA's satisfaction. The WTCC duly returned in 2008 and 2009 and had been set to feature again in 2010, until local authorities informed series bosses that the safety of visitors could not be guaranteed due to unrest in the region. It proved to be a final blow for the series and Puebla has not featured since.

From then onwards, Puebla reverted to hosting national events. It has been a host of the 24 Hours of Mexico on several occasions, while it is a regular on the NASCAR Mexico schedule. It was during the latter race in 2009 that the circuit suffered one of its darkest moments, when Carlos Pardo was killed in an horrific accident on the back straight of the oval when disputing the lead with Jorge Goeters. Pardo's car slammed into the end of a retaining wall at full speed, causing the car to disintegrate and the driver to suffer fatal injuries. He was declared the winner posthumously as he had led over the line on the preceding lap prior the red flag.

The circuit has continued to host NASCAR Mexico alongside general testing and manufacturer events. Formerly homologated as an FIA Grade 2 facility, the track has now been downgraded to an FIA Grade 3 rating.

There was a further surprise international event in 2021, when Puebla stepped in to host the Formula E series for electric single seaters. The usual venue in Mexico City was unavailable due to being used as a temporary hospital during the coronavirus epidemic. Series bosses elected to switch the event to Puebla, rather than cancel, to help preserve the viability of its North American leg. As a result, the series found itself in new surrounds for a one-off double-header race.

If ever there was a permanent circuit which suited the stop-start nature of Formula E, Puebla must surely be at the top of the list. Unlike the visits to other permanent facilities, there was little need to modify the course layout to suit the electric race cars, though Formula E did elect to add in its usual additional concrete barriers around the course to aid the 'street circuit' feel. These had the effect of tightening the radii of a couple of corners, but fundamentally the layout remained the same. It duly received an FIA Grade 3E homologation in this form.

The first race was won by Lucas di Grassi ahead of his teammate René Rast and Edoardo Mortara, after pole-sitter and original race winner Pascal Wehrlein was disqualified due to a technical infraction. Edoardo Mortara won the second race for Venturi, with Nick Cassidy and Oliver Rowland rounding out the podium

Planning a visit to Puebla? Find the best deals near to the circuit on hotels, apartments and rooms to rent from the map below.

The Autódromo Internacional Miguel E. Abed is located at Puebla, Mexico. Puebla International Airport is a 45-minute drive from the circuit.

The track is located next to Highway 150 and a short distance from Highway 150D on the outskirts of Amozoc de Mota, east of Puebla city. 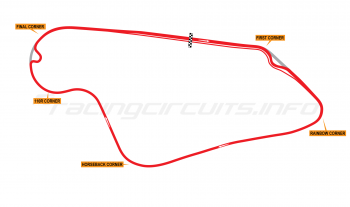 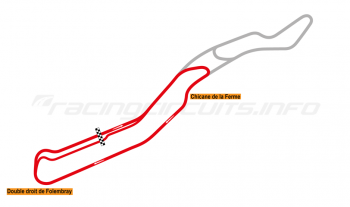 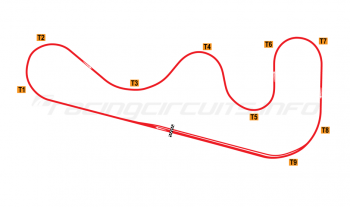