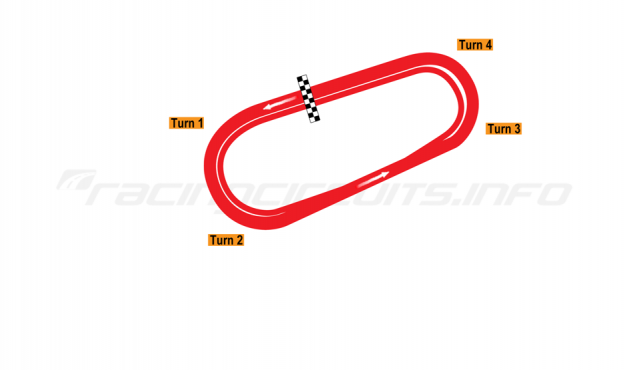 The Autódromo Potosino is a short half-mile oval course near the city of San Luis Potosi in central Mexico. A staple of the NASCAR Mexico calendar, the facility runs two 200km races for the stock car series.

It began life as a road course in 1985, built by Michel Jourdain, Sr's Promotodo company. At little more than 0.7 miles in length it was a short, low speed affair but it nevertheless attracted strong crowds for the Malboro Cup races (the championship organised by Promotodo) thanks to excellent spectator views. At its peak, crowds of up to 50,000 would pack into the tiny facility, safe in the knowledge that they would be able to see the whole circuit from the earth banks.

With the demise of the Cup races at the end of the 1990s, Potosino fell into disuse but by 2005, the rise in interest in NASCAR-style racing prompted the track's owners to plough under the road course and replace it with a half-smile oval. Although it does not boast any permanent garage facilities, the new 'súper óvalo' does have large grandstands which can seat up to 8,200 in relative comfort. Traces of the old road course remain on the outside of the oval.

As well as the NASCAR Toyota Series, the track hosts races for the domestic T4 Series and a handful of local races each year.

The Autódromo Potosino can be found at Villa Zara Zaragoza, close to San Luis Potosi in central Mexico.  The nearest international airport is Ponciano Arriaga International Airport at San Luis Potosi, around a 30 minute drive to the north-west.

The circuit can be found alongside Route 70, which connects San Luis Potosi to the coastal city of Tampico.  Head out of San Luis Potosi and the circuit will appear on the right hand side after around 18 miles.

Find the best hotel and room deals near to Potosino: