Circuit Mont-Tremblant, sometimes referred to as St. Jovite, is a classic road course in a stunningly picturesque setting in Canada's Laurentian Mountains.

Since opening in 1964, it has ascended the motorsports ladder to host racing at the highest level, only to be overtaken by other Canadian circuits and slipping into relative obscurity in the 1980s and 1990s.

Happily, the track was rescued and extensively redeveloped by billionaire Laurence Stroll, resulting in a brief return to international attention with the visits of ChampCar and Grand Am, before settling into life as a venue of note for historic racing.  It hosts Spring, Summer and Fall Classic events, alongside the annual Sommet des Légendes.

Mont-Tremblant, located some 90 miles north of Montréal, is famous for skiing and motorsport, with both proving major draws to the area in winter and summer respectively.

What many people may not realise is that close connection that the ski resort and its motor racing neighbour share. It was in 1938 that an explorer from Philadelphia named Joe Ryan came to the region prospecting gold, only to discover what glistered was in fact coloured white. Climbing Mont-Tremblant to the summit with friends Harry Wheeler and the noted journalist Lowell Thomas, Ryan vowed to turn the landscape into an alpine village.

Within a year, the vision was a reality with the opening of the Mont-Tremblant Lodge and soon – aided in no small part by keen skier Lowell's frequent radio reports from the resort – the area became a destination for winter sports enthusiasts and today ranks among the top resorts of Eastern North America. Seasonal success came at a price; the summer period was much quieter and left locals – particularly those who worked at the ski resort – little chance of employment.

Enter Leo Samson, a local hotel keeper, painter and racing enthusiast, who had the idea for a motor racing circuit germinating in his head ever since his father had taken him to watch races in Montréal as a boy. After several years raising the necessary support and buying suitable land, he became the second man to turn his Mont-Tremblant dream into a reality. Carved out of the rolling hillside and surrounded by the most picturesque of scenery, Circuit Mont-Tremblant was born.

The links with the skiing world were formalised as the new circuit was dedicated to the memory of Pete Ryan, Joe Ryan's son who, after a successful skiing career was cut short by injury, turned his hand to racing. He was just a promising a prospect in his new sport and won the first ever Canadian Grand Prix at Mosport in 1961 (run to sportscar rules) but was killed at Rheims, France, during a Formula Junior race the following year.

The course opens in shortened form then expands

The course was inaugurated in August 1964, initially as a 1.5 mile course, Ludwig Heimrath having the privilege of being the first victor. 'Le Circuit' – as it was affectionately known – was a true test of a driver's ability. From the start the course headed uphill to the flat out turn one, which had its apex on the crest before plunging downhill through a cutting to a series of esses. A couple of short straights and 90-degree bends brought the cars back up the hillside and under a bridge, before a blast up to the challenging uphill Namerow hairpin before sweeping back to the start through the Paddock Bend.

A year later and Mont-Tremblant's full majesty was complete with the opening of the extended 2.65 mile Grand Prix course. This continued down the hillside through a series of fast sweeping bends before turning through 180 degrees to head up the back straight and rejoin the previous 'short' circuit. The back straight featured a huge elevation change, known as 'The Hump', at around its midpoint. Cars would easily go light as they hit the crest, with a tree-lined fate awaiting anyone who became seriously airborne. It was not hard to see why the circuit quickly drew comparisons with the Nürburgring.

The key to a good lap time then as now is maintaining momentum, particularly through the sweeping turns which lead onto the straights. Adding to the difficulty was the bumpiness; the harsh winters soon took their toll on the racing surface meaning cars would skit from bump to bump as they traversed the course.

In 1966 the circuit was host to the inaugural Can-Am race, won by John Surtees in a Lola. The event saw 'The Hump' claim its first casualties when two Lola T70 cars were launched into the air during practice, fortunately without serious injuries to their drivers, though both cars left were beyond immediate repair.

Indycar and Formula One arrive

Soon after the circuit attracted even more prestigious events, hosting two Indycar double header events in 1967 and '68, with Mario Andretti winning all four! Then in 1968 and 1970 came the Formula One Grands Prix. The bumpy surface exacted a heavy toll on the thoroughbred cars at both events and many cars retiring with mechanical difficulties. Denny Hulme and Bruce McLaren finished the 1968 race to give the McLaren team a 1-2, while Jacky Ickx won for Ferrari in 1970, perhaps some recompense for the Belgian who had broken his leg in a crash during practice at St-Jovite in 1968.

Formula One departed for Mosport and then Montréal in the years that followed; the relatively remote nature of Mont-Tremblant counted against it, as did the all-too evident dangers of racing such high-powered machinery on the narrow, bumpy course. Soon it was only Can-Am that brought visitors from overseas and even then the big sportscars stopped visiting after 1971. The revived series paid two further visits in 1977 and '78, the first of which was notable for Brian Redman's huge crash at The Hump which left the British driver with injuries that left him out of racing for nine months. After that even Can-Am departed for good and Mont-Tremblant only held local racing.

By the 1990s, the circuit was something of a time capsule, well below the standards required for modern contemporary racing. The circuit had changed hands a number of times over the years but in 2000 the whole complex was purchased by Lawrence Stroll, the Montréal fashion mogul who had made his fortune through the Tommy Hilfiger label and had been a sponsor during the dying days of the Lotus team in the 1990s.  He would go on to buy the Racing Point Formula One team and car maker Aston Martin 20 years later.

Stroll appointed Alan Wilson to redevelop the circuit to modern FIA standards, though he was keen to keep the essential character of the course.

The redevelopment had to be extensive, with room created for greater run-off around the course, new crash barriers and a widening of the entire course to 11 metres. The Hump got a major overhaul, being lowered considerably, while Turn One also received a makeover, with an optional chicane added for the fastest cars.

A new south course was also added which could operate simultaneously from the north (short) course, thanks to its own pit lane and paddock. The changes necessitated the track's closure for two years, so it wasn't until 2002 that the circuit could reopen in its new guise.

Rather like Goodwood, the efforts to keep the essential character of the old track have been a success, with many of the old buildings preserved or upgraded in keeping with their original design. The iconic control tower now boasts and additional floor level, but you'd be hard pressed to notice, so close in design is it to the original.

Historic racing has become the main fodder of the refurbished circuit, with a number of popular meetings throughout the year, though there have also been a number of visits by contemporary racing series. From 2002-05, the Grand Am Series included a stop-off at Mont-Tremblant, with a six hour race reviving something of the spirit of sportscar races of old. In 2007 the circuit hosted a ChampCar race as well, which was eventually won by Dutchman Robert Doornbos after numerous lead changes and a late-race rain shower spiced up the action.

With the unification of Indycar racing in 2008, there was no longer a place on the calendar for Mont-Tremblant, which is something of a shame as all involved were captivated by the circuit and its setting.

As well as racing, the circuit has long been home to a Jim Russell Racing Driver School, through which all three racing Villeneuves first learned their trade – perhaps explaining why they all went on to great success. Anyone who could master Mont-Tremblant was probably ready to take on any other circuit motor racing could throw at them!

Planning a visit to Mont-Tremblant? Find the best deals near to the circuit on hotels, apartments and rooms to rent from the map below.

Circuit Mont-Tremblant is located a few miles north of Mont-Tremblant in Quebec, Canada. The nearest international airport is Montréal's Pierre Elliott Trudeau International Airport, around 1 hour and 45 minutes away. Mont-Tremblant itself has a smaller airport with connections to Montreal and Toronto, though these tend to cater for winter seasonal traffic to the ski resort.

By road, the circuit is approximately 1 hour and 20 minutes from Montréal. It is easily accessible via the Laurentien Autoroute 15. Head north to Sainte-Agathe, where autoroute 15 North merges with Route 117. Continue north to Mont-Tremblant (approximately 15 miles / 25 km). Take exit 119 (Montée Ryan) and turn right. After approximately 3 miles / 5 km on Montée Ryan you'll arrive at a roundabout. Turn left onto Chemin du Village. The circuit's main entrance will be on your right after half a mile (1 km).

On race days, parking is free with a general admission ticket. Infield parking is available for an extra charge. 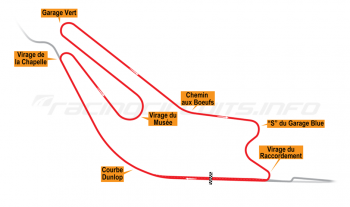 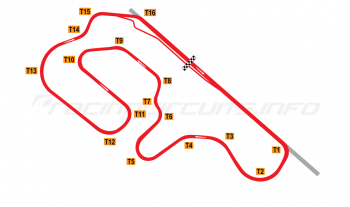 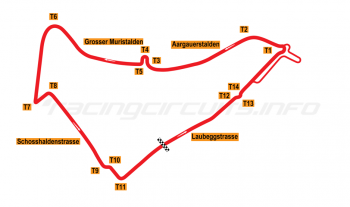