That Calabogie Motorsports Park is not better known outside of Canada is something of a shame, for it is another Alan Wilson-designed track with great facilities and a challenging layout.

At 3.14 miles (5.05 km) it is Canada's longest circuit in its fullest form, though shorter east and west variants can also be used and operated simultaneously. It has a great mix of all types of corners, with enough variation in radius and elevation change to make it tricky to master.

The track was the brainchild of a group of enthusiastic investors who wanted to create a challenging facility for people to indulge their need for speed in a safe environment. With a philosophy of 'build it and they will come', they hunted for a piece of land which was relatively close to major urban centres while still offering the type of challenging terrain that would result in a memorable circuit and had enough space to create a world-class facility without the usual issues of close proximity to housing.

The small eastern Ontario community of Calabogie - around an hour from the capital Ottawa - seemed to offer the best possibility. Just a few miles out of town lay a 486-hectare parcel of land nestling among the thick Boreal forest that makes up much of the swooping landscape. It seemed ideal and a deal was soon struck.

Hiring Alan Wilson to pen the facility was the group's next masterstroke; one of North America's most famed track designers, his portfolio includes the much admired Barber Motorsports Park and the Utah Motorsports Campus. The brief was relatively simple - make it challenging but safe enough for amateurs and club racers to make mistakes without serious consequences. The result was a charismatic venue in a picturesque landscape. Wherever possible, barriers were eschewed in place of wide run off and level gravel traps.

At its opening in 2006, facilities were fairly basic - there was no electricity, no running water and the management worked out of construction trailers. Since then, the track has continually made improvements as its customer base has increased; there's now almost 40,000 square feet of garages, administration and entertainment facilities, with everything that its clientele expects easily catered for.

The typical track user is the driver of a road going sports car or sports bike driving amongst small groups of similar performance vehicles in low-intensity competitive or non-competitive conditions. Such drivers are typically part of a club group, often coordinated under the auspices of such clubs as the Porsche, BMW and Viper one-make associations or as part of commercially operated Track Day groups or regional sports car clubs. Many users are also drawn to the Calabogie Motorsports facility as customers of high performance driving or riding schools.

In addition to car and motorcycle clubs booking the track for lap days, CMP also caters for corporate events, with a fleet of Ford Mustang track cars making up the 'Mustang Driving Experience'. The five-level graduated driving program comprises anything from a two-hour session which includes one-on-one instruction, on-track orientation, driving theory and 30 minutes of lapping following a pace car, right up to a full day at the track. Marketed as an alternative to a day at the golf course, it has proved popular, even drawing in clients from across the US border.

Planning a visit to Calabogie Motorsports Park? Find the best deals near to the circuit on hotels, apartments and rooms to rent from the map below.

Calabogie Motorsports Park is located a few miles east of Calabogie in the township of Greater Madawaska, Renfrew County in eastern Ontario, Canada. The nearest international airport is Ottawa's Macdonald-Cartier International Airport, which is around 1h 20 minutes' drive from the circuit. Arnprior/South Renfrew Municipal Airport is closer, but only caters for private aviation.

To reach the track by car, take the Trans-Canada Highway (17) west out of Ottawa. At McNab/Braeside townships, turn left onto Route 508 - signposted for Calabogie Road/Calabogie. Upon reaching Calabogie, turn left onto Lanark Road (Route 511), signposted for Calabogie Motorsports Park. Continue for around four miles on 511 until you reach the circuit entrance road on your left. 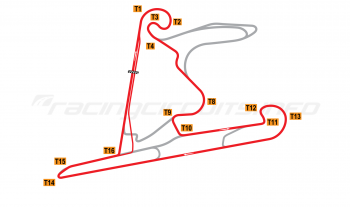 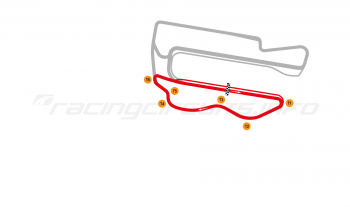 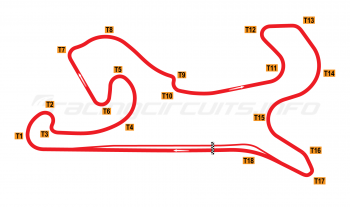