Area 27 is an exclusive membership based luxury motorsports club, formed by Formula One World Champion Jacques Villeneuve and his business partners, with a self-designed course stretching out across a hillside site in western Canada. The aim is to provide a similar experience to a golf course for well-heeled petrol heads, hidden away from public view.

The course is certainly spectacular and worthy of the World Champion's backing.  Fast and smooth with considerable elevation change throughout its length, it's a real challenge for drivers.

It is home to a Camaro Driving Academy, as well as Academy 27, the circuit's own private performance driving school, headed by Canadian champion Kees Nierop.

The seed of the idea for the circuit took 25 years to fully germinate. Bill Drossos was competing in the Formula 2000 series at Canada's pre-eminent driving academy when he met Jacques Villeneuve and David King. During this time, Drossos stated that if a great racetrack could be built in a resort community, it would be truly something special. Two years later, while competing as a professional in the GM motorsport series, Drossos would meet fellow driver Trevor Seibert.

Fast-forward 25 years to 2012, Drossos identified land suitable for a racetrack, perfectly matching the original intention. Drossos would call on his friends from his early racing days – Villeneuve, King, and Seibert – to reunite, and to form the South Okanagan Motorsports Corporation. This was the team that was tasked with completing the vision now known as Area 27.

Hidden in the hills overlooking the South Okanagan Valley, Area 27's 227 acre site provides a hint towards the origin of the circuit's name. While the site could be seen from space, a huge earth berm means that it is hidden from public vantage points, much like a certain secret base in Nevada. The number 27 was chosen as a tribute to Canadian racing legend Gilles Villeneuve, who claimed the number as his own driving for Ferrari.

Construction began on February 2, 2016 for a seven-month build schedule that would culminate with the first laps taking place on August 30, 2016.

The circuit has the unique distinction of being envisioned, designed, engineered, and constructed by professional race car drivers. Designed to take advantage of the natural terrain, Area 27's sixteen turns flow through elevation changes like a favourite country road. Complex corner sections are followed by long straights to give drivers a chance to relax and check their gauges.

"I have always relished the challenge of designing an exciting track, taking into account the single lap excitement, combined with wheel-to-wheel racing opportunities, all while avoiding the pitfalls of the uninteresting tracks. The goal is to design a track I would be proud of getting pole position on, where the fans would also enjoy watching an exciting race."

During the inaugural season, the circuit played host to Chevrolet, McLaren Cars, and Subaru Canada, while more recently it featured in the Amazon Video production the Grand Tour, when Jeremy Clarkson, James May and Richard Hammond tested Porsche, Range Rover and Alfa Romeo SUVs against the clock.

Another milestone was hit in early 2018, when all all 300 family memberships sold out and plans for the first permanent building on the site were unveiled. This multipurpose building will feature over 9,500 square feet of space overlooking the circuit, on-site food and beverage services and Academy 27 classroom facilities. Agreement was also reached with Porsche Centre Kelowna to bring expanded public offerings to the circuit, including the new Academy 27 Pro Ride Experience.

The circuit has continued to upgrade since opening, including adding expanded and additional gravel traps, new tyre barriers, flagger stands, and conveyor belt protection to tyre barriers in 2020.

Planning a visit to Area 27? Find the best deals near to the circuit on hotels, apartments and rooms to rent from the map below.

Area 27 Motorsports Park is located at Oliver, in British Columbia, Canada. The closest major airport is Penticton Regional Airport, around 30 minutes north along Highway 97. Kelowna International Airport is a further hour to the north, with links to all major Canadian airports.

The circuit is a short distance south of the town of Oliver and Highway 97. From Oliver, head east along Fairview Road and McKinney Road, then turn right on Black Sage Road and head south though the vineyards. After several km you will reach a left hand turn for Nk'Mip Road, which leads directly to the circuit entrance. 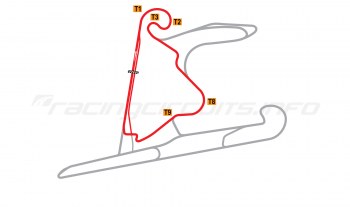 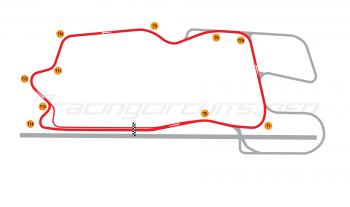 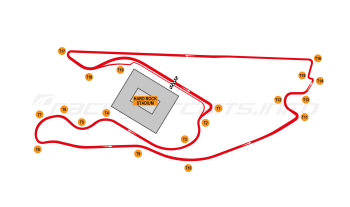