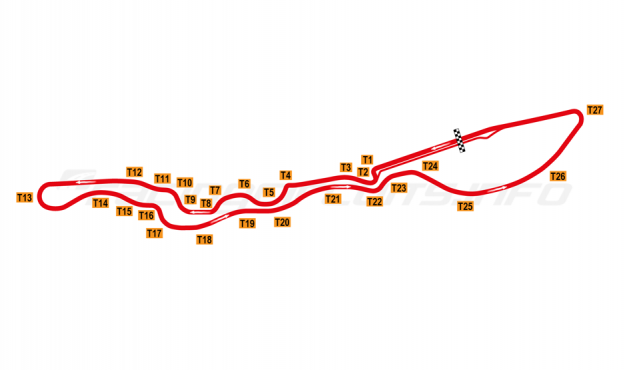 Jeddah’s Street Circuit is host of the Saudi Arabian Grand Prix and has been designed to showcase Formula One’s spectacular speed to the maximum.  The second-longest circuit on the calendar, it is also set to be one one of the fastest too, with an average speed of over 250km/h predicted in simulations.

Located in Jeddah’s stunning Corniche area, approximately 12km north of the city centre, the circuit skirts the Red Sea and encircles a lagoon, and with three potential DRS zones and an evening start time, it should produce spectacular racing under floodlights.

Developed with close collaboration between Tilke GmbH & Co. KG and the Formula 1 Motorsport team led by Ross Brawn, the circuit is atypical of many street circuits in that it utilises existing roads as much as possible yet remains fast flowing in character.

Long search for a venue

Formula One - and more accurately Bernie Ecclestone - spent many a year chasing the dollars of the oil-rich nations of the Middle East, with races established in both Bahrain and the United Arab Emirates. It's with some irony then, that F1 in the post-Bernie era should schedule a race in one of the countries with the longest associations with the sport, Saudi Arabia.

As long ago as the late 1970s, the country had involvement through its sponsorship deals (via the Saudia national airline) with the Williams team. More latterly, Saudi Aramco has become a major sponsor of the sport, so perhaps a venture to the Kingdom was inevitable.

A new purpose-built facility in the city of Qiddiya looked to be the favourite to win the race, with the circuit announced in August 2019. The project was conceived by Test and Training International, a motorsports consultancy headed by former Formula One driver Alexander Wurz. The aim is to create a world-class circuit capable of hosting all FIA categories through to Formula One.

That project is still going ahead, but instead Formula One has turned its attention to a completely different venture. In November 2020 the Saudi Arabian Grand Prix was confirmed to be taking place in the city of Jeddah, in collaboration with the Saudi Automobile and Motorcycle Federation.

A street circuit was the favoured option for the country’s second-largest city, with Formula 1’s in-house Motorsports team asked to investigate the feasibility of various locations around the city.  After several days spent pouring over Google Earth, several potential layouts were mocked up to create simulation models ahead of a site visit.

In January 2020 a delegation arrived to recce a number of potential sites, with the Corniche area quickly emerging as the frontrunner.  Located 12km north of the city centre, the Corniche is a narrow strip of reclaimed land alongside the Red Sea which features lagoons, open spaces and car parks.  It’s wide, sweeping road layout was also ripe for conversion into a unique street circuit.

“The site on the Corniche in Jeddah stood out,” explains Ross Brawn, F1 Managing Director, Motorsport. “It’s on the coast, so we have great panorama but more importantly, we’ve been able to build a really exciting street circuit.”

Tilke GmBH was selected by the race promoter to work with the F1 team to design the finished circuit and its amenities.  Various iterations were designed, simulated and tested, prior to establishing the final layout.

Craig Wilson, F1's Head of Vehicle Performance explains: “The biggest challenge was working out how to come up with a track concept within what is quite a narrow strip of land, that still had decent cornering sections with a wide range of corner speeds and not just be a layout of hairpins, tight corners and straights.

"It took a few different concept schemes to begin with but once we assessed the simulation results then it was possible to settle quickly on a concept that we believed would work.”

All parties were keen to avoid the mistakes of some street circuit designs of the past, replete with a proliferation of slow-speed, 90-degree corners (we’re looking at you here, Phoenix!).  Instead, the team came up with a fast and flowing design which packs in 27 turns around its 6.175km length.

The result is a lap that should see the Formula 1 cars circulated at average speeds of 252.8km/h according to the simulations, which would put Jeddah second only to the classic temple of speed of Monza on the current calendar.

“There are some great sweeping corners,” says Brawn. “At one end, there will be a 180 degree corner with a moderate amount of banking, so it will be a high G-load and high stress for the drivers.”

Among the other innovations around the circuit are a grandstand and hospitality area which floats above the circuit between Turns 2 and 3, while the whole track will be illuminated by floodlights.

The exact number of DRS zones used in Jeddah will be decided by the FIA nearer to the race, but the circuit has been designed with three areas in mind.  The idea is to encourage as much overtaking as possible, though it remains to be seen how effective this will prove in practice.

The first race on the circuit will take place on December 5, 2021 and is set to provide a spectacular race under the lights.

The Jeddah Street Circuit is located in the Corniche area of the city, around 12km from the centre. King Abdulaziz International Airport is located nearby, around 25 minutes drive from the circuit area.

As the track is in the early stages of development, little is yet known about the best routes in and out, though the main grandstands will be located at various points along the Corniche Road.

Find the best hotel and room deals near to Jeddah Street Circuit: