A top-class racing circuit located in the middle of sand dunes in near desert conditions doesn't seem very likely, yet this is precisely what the Bahrain International Circuit delivers.

Built to exacting standards to a design by Herman Tilke, the track is best known as the host of the first Formula One event in the middle east, though it has also seen action from a variety of overseas championships, including the Australian Supercars.

Today, the circuit continues to host Formula One, alongside Formula 2, the World Endurance Championships, regional events including the Gulf 12 Hours and the Middle East Porsche GT3 Cup, as well as the circuit’s own collection of local touring car and bike racing events.

As with many of the Gulf state motor racing venues, BIC owes its existence to royal connections; Crown Prince Sheikh Salman bin Hamad Al Khalifa is a motorsport enthusiast and honorary president of the Bahrain Motor Federation. Gaining an F1 race thus became a national objective and the construction of a suitable circuit was ordered, with funding from government-backed investment companies.

In 1999, Hermann Tilke was approached to design proposals for a multi-layout facility, which was to be finished to world class standards. It marked the first time Tilke had worked in the Middle East.

To begin the process, Tilke needed to find the perfect location and began exploration of five sites which had been identified. There was talk of locating it on the streets of the capital Manama, while others suggested locating it close to the country's highway network.  All had their drawbacks and in Tilke’s mind the final site, located in the Sakhir area in the centre of Bahrain’s main island, was ideal, not least because it allowed at least some variation in elevation.

The circuit was initially conceived to be constructed in three phases; first would come the ‘inner’ circuit, ideal for establishing local racing.  Second would be the outer circuit, with amenities suitable for touring car and GT racing, while the final phase would see the full Grand Prix circuit and associated facilities being completed.

Tilke designed a circuit with several lengthy straights, connected by medium and slow speed sections, putting a premium on a setup with good traction. Emphasis was placed on the local architecture in the designs for the many buildings and grandstands on site.

Then in September 2002, there was a surprise when Bernie Ecclestone awarded the new circuit a Grand Prix, starting in 2004.  This came at a time when events in India, Turkey and Russia had been jostling for calendar slots, so to secure one ahead of more talked about projects was a coup, particularly as Bahrain hadn’t got much beyond the groundbreaking stage. The three-phase construction plan was suddenly obsolete and it was full steam ahead for Formula One.

Construction started in late 2002, with a very challenging 16-month deadline to get the facility fully completed.

Scottish engineer Gordon Calder was brought in to head the construction team, which involved WBC - which had built the Sepang Circuit several years previously - and local firm Cebarco.

Adding to the difficulties was the rocky nature of the chosen location, which required considerable blasting and excavation to level areas for construction.  A total of 2,000 tonnes of rock would ordinarily have needed moving out of the site, however fears of the damage that would have been caused to the local road network lead to machinery being brought in to crush it on site, ready for use in the track’s construction.

The track surface itself posed a conundrum. Coping with the desert conditions which mean baking hot daytime temperatures and freezing conditions at night would require a special asphalt. Equally, the track would need to be grippy enough for racing, yet able to withstand these harsh conditions.  The solution came from a surprising source: a quarry in Shropshire, in the United Kingdom. Tonnes of rock were shipped over at great expense to help form the final mix, adding in polymers and other advanced materials from elsewhere around the world.

A further surprise from Formula One management came with the news that Bahrain’s slot on the calendar had been moved forward by six months, obliterating any safety net for the construction team. It meant there would be less than a month between the construction team handing over and the race being held.  The pressure was on but against these odds, round the clock working enabled the circuit to be handed over on time.

A variety of layouts have seen active use, with Formula One itself using three different configurations over the years. As well as the standard Grand Prix layout, in 2010 the longer Endurance variant was tried in an unsuccessful attempt to spice up the show. Then in 2020, Bahrain found itself hosting two Grands Prix on consecutive weekends as part of the coronavirus-affected schedule and, uniquely, decided to host them on different layouts.

The first event used the traditional Grand Prix variant and saw an enormous crash on lap one involving the Haas of Romain Grosjean, who spun off on the exit of Turn 3 following contact with another car, the Haas pierced the metal barriers and exploded into flames, coming to rest in two parts. Miraculously, Gosjean emerged with injuries amounting to some burning to his hands, for which he was hospitalised for several days. Lengthy repairs were required to the barriers before the race, eventually won by Lewis Hamilton, could resume.  A full FIA enquiry has been started to learn any lessons from the incident.

The second F1 event, run under the banner of the Sakhir Grand Prix, used the Outer Circuit. This delivered a fast and furious race, memorably led by Mercedes-Benz debutant George Russell, subbing for a coronavirus affected Lewis Hamilton. One of the shortest lap times in Formula One history saw a race of high drama, with Sergio Perez taking a debut win for Racing Point when Russell suffered a pit-lane penalty after a mix up by the team sent him out with some of his team mate’s tyres fitted.  A puncture only added to the Englishman’s misery.  Perez had raced through the field after being punted into a spin on the first lap.

The Outer circuit certainly produced many headlines and showed a new-found willingness for Formula One to experiment, however it seems likely to be a one-off event.

Other circuit layouts to see use over the years include the Paddock course, used by the visiting V8 Supercars when they held the Desert 400 race between 2006 and 2008.  The final event in 2010 used the full Grand Prix circuit however.

While the Inner Circuit (also known as the ‘Oasis’ circuit) hasn’t seen any major international racing action, it’s separate pitlane and paddock facilities have been taken advantage of by the GP2 and the Porsche Supercup fields when part of the undercard at the F1 events.

The only real modifications to the circuit over the years have involved the Turn 4 hairpin, which was opened up after the first year to create a wider, more open overtaking opportunity, and the addition of the Endurance Circuit layout in 2005.  Minor changes to the support paddock pit lane were required in 2005, to create a better exit which blends into the circuit further round turn 11; and in 2007 following the regrading of the drag strip.  This saw the staging area moved further to the north, in order to reduce the need to use the portion which crossed over the Grand Prix circuit.

Planning a visit to Bahrain International Circuit? Find the best deals near to the circuit on hotels, apartments and rooms to rent from the map below.

The circuit is located at Sakhir, in central western Bahrain, approximately half an hour from the capital, Manama.  Bahrain International Airport boasts good connections inside the Middle East and around the world and can be found a further 10 minutes north of Manama, on an island joined to the city by two large bridges.

Bus, taxi and hire car are your choices for getting around Bahrain. Airport buses operate to and from all the main hotels, as do circuit shuttles. 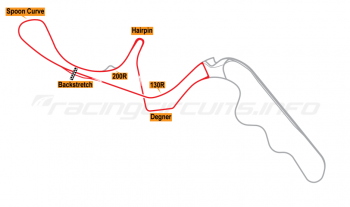 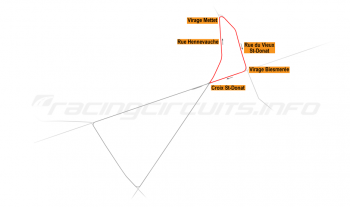 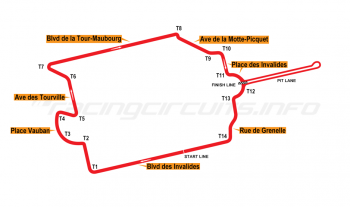