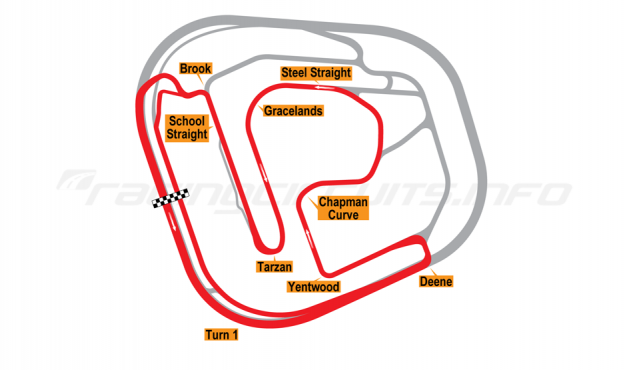 Rockingham was Britain' first full sized oval speedway since Brooklands and also the first ground-up purpose-built circuit in England since its illustrious forefather. While the circuit has seen oval racing action of the highest standard in its past, hopes of establishing a European base for American-style oval racing quickly faded and it was the infield road course which sees majority of the action.

After 18 year's of successful operation - if not necessarily always profitable - the circuit was sold to a company that plans to convert it into a state-of-the-art specialist automotive logistics and vehicle storage centre, marking the end of its time as a motor racing venue.

The circuit began with more modest ambitions, one man's idea to turn the derelict wastelands of a former steelworks at Corby in Northamptonshire into a test track. Peter Davies was an entrepreneur who had dabbled with racing at an earlier age when, upon seeing the old abandoned industrial land, sensed there was an opportunity.

Purchasing the 383 acres of land in 1991 for a nominal fee (albeit with strict liabilities) Davies set to to work researching what kind of test track to create. Trips to the USA- including talking his way into a meeting with Indianapolis Motor Speedway boss Tony George at the Indy 500 - gradually saw the expansion of his vision. The test track gave rise to a race circuit and with major earthworks required due the poor quality of the land, using the extracted earth to create a banked outer oval seemed a pragmatic and cost-saving solution.

By 1993, a detailed planning application was approved, calling for a multi-configuration road course surrounded by a unique quadrilateral oval. Named Deene Raceway after the former iron ore quarry on which it was to be built, the project seemed to have taken a significant step forward. The only (and major!) problem was that Davies didn't have the finances to complete the project. Various potential American investors came and went and for several years there was no activity at all on the site.

Undeterred, in 1999 Davies went public with his vision, by now named Rockingham Motor Speedway after the nearby local landmark, Rockingham Castle. The change of name had a positive side effect, creating psychological affinity with the similarly named facility in North Carolina, no doubt subconsciously helpful when talking to potential investors.

There was also activity on the site at long last – though it didn't exactly herald the start of construction proper. "We had to start building on the site because you get five years with planning permission and there was no way we were going to get it again," Davies explained in 2011 to Motor Sport magazine. Three days before the permission was due to expire, Davies hired a JCB to dig out and then pour with concrete what would become the foundations of the security building that today greets racegoers at the circuit entrance.

Still requiring the finances to begin building proper, a friend suggested Davies should go and see Guy Hands, the financier and investor who would later go on to found venture capital firm Terra Firma Capital Partners. Hands was quickly interested in the project and, after months of detailed proposals, agreed a personal deal to stump up the funds for construction.

Construction could at last begin in earnest at the end of May 1999, shortly after which another piece of the jigsaw puzzle fell into place with the involvement of US racing mogul Gerry Forsythe. Investment through his Indeck Group of companies provided additional capital, but it was his expertise and contacts in the US racing world which were just as valuable.

As construction continued through 2000 and the early part of 2001, Hands imposed changes on the management structure at Rockingham, bringing in a new accountant and chairman to see the project to completion. Keen to secure a headline event for the new track, investment was doubled to speed up the construction in order to secure a round of CART Champ Car series, which was ready to expand into Europe for 2001.

As a key player in the organisation of the CART Champ Car series, Jerry Forsythe's assistance was invaluable and it was no surprise when Rockingham duly appeared on the CART schedule as part of European double-header with the equally new Lausitzring in Germany.

Sadly, for Peter Davies, the writing was on the wall; he was ousted at an acrimonious board meeting in December 2000, along with PR manager Christopher Tate and finance director Robin Smith. For Davies it would mean seeing the birth of the circuit he had worked for 10 years to build from the sidelines. Former hillclimb champion David Grace was installed as the new chief executive.

Rockingham opened for business on Monday 15 January 2001 and was formally opened by the Queen on 26 May 2001. The facility was certainly impressive; as Britain's first all-seater motor sports stadium, it could cater for 52,000 spectators, 6,280 of which were in the Rockingham Building, a steel-framed, glass-fronted grandstand building containing suites, offices, bars and kitchens. The remainder were accommodated in four open-air bleacher stands.

The oval had an unusual four-sided composition, with relatively shallow 7.9 degree banking in the turns. Inside was the slightly sinuous road course, with a variety of different layouts, all of which could be seen in their entirety from the grandstands – a unique feature for a British circuit.

Among the series to race on the new circuit in its first year was the ASCAR championship for NASCAR-style stockcars. The championship was organised and funded by Rockingham itself in a bid to boost interest in US-style racing. However, the headline event in the inaugural season was undoubtedly the visit of the CART Champ Cars for the Rockingham 500.

It is probably fair to say that fate was not on the circuit's side, for when the teams arrived for practice and qualifying on September 19, there was a sombre mood. The event came in the immediate wake of the 9/11 terror attacks and just days after Alex Zanardi had lost both legs in an horrific crash at the Lausitzring. The crews and drivers could be forgiven for simply wanting to be back home as soon as possible.

Unfortunately, they would have to endure a frustrating wait to even begin practice, as a fault in the track's construction reared its head. Heavy rains in the previous days had saturated the ground and, despite no new rain failing, an overly porous track surface allowed moisture to seep back through, the resultant 'weepers' creating track conditions akin to driving on black ice. Cars remained stuck in the pits and the first two days of practice were a write-off. An army of jet blowers was brought in to work through the night to dry the offending sections of circuit and by race day, the track was finally ready for action.

A hastily rescheduled event saw minimal practice laps completed and the race distance shortened to 300km. The crowds did at least get to enjoy a thrilling race, as Swede Kenny Bräck had a race-long battle with Gil de Ferran, losing out to the Brazilian after an audacious manoeuvre on the final run to the chequered flag. The track divided opinion among the drivers, but one thing was certain – it was fast; Tony Kanaan lapping the 1.47 mile oval at an average of 215.397 mph to set the outright lap record.

The following year's Champ Car race was thankfully trouble free and able to go its full distance. Even better, Dario Franchitti was able to score an immensely popular home win for Team Green – his first win on an oval. However, a race-day attendance of just 25,000 (down on the previous year's 40,000) meant the facility was under half-full and the CART events were making large losses.

Change was inevitable and Hands brought in new management as David Grace stood aside. Ashley Povey and Joe Dickinson negotiated an end to the CART contract (Champ Cars would race at Brands Hatch in 2003) and the pair ultimately found themselves as majority owners when Hands elected to cut his losses and sell out for a nominal fee.

The new focus was on the all oval ASCAR series, with an additional feature being the yearly visit of the British Superbike Championship for a race on the road course. However, a disastrous 2003 event spelled the end of the bike event. White 'safety' lines that had been painted to denote out-of-bounds portions of the track proved extremely low grip, causing one errant rider to crash and destroy his bike. Qualifying was cancelled as track workers worked to removed the offending lines. It was no surprise when the series elected not to return in subsequent seasons.

A Northern Irish consortium bought out Pover and Dickinson in 2006 and slowly the circuit's fortunes began to turn. A new focus saw non-motorsport events predominate, including manufacturer product launches, dealer training, track days and testing, and corporate and experience days. In total the circuit now operates for 357 days each year.

The motorsport calendar now centres on the the road circuit (most often on the clumsily-titled International Super Sportscar variant), with the BTCC established as a popular headline event, supplemented by Formula 3 and British GT races as well as club level car and bike events. This mix of events is ironically much closer to Peter Davies' original vision for the circuit, which now generates modest profits.

In April 2013 the ownership changed hands once again, as it was sold to Jersey-based investment group Grey Rock, headed by sometime endurance racer Stuart Wright. The buyout was part of an acquisition of the neighbouring Priors Hall housing development but the new owners have stated the deal secures the speedway's future as a motorsport venue.

New circuit boss Peter Hardman – himself a noted sports car and historic racer – said the focus would remain on the road course for motorsport activities and suggested there could be revisions to the layout to reflect this in coming years, in the hope of attracting bigger international events. As part of a move to distance itself from oval racing, the Motor Speedway part of the name was quietly dropped, leaving the circuit simply branded as 'Rockingham'.

After a faltering start, Rockingham seemed to have found its niche and for the next five years the concentration on road racing seemed to be paying off.  However, in 2018 the sale of the circuit was rumoured and speculation begain to intensify when it was left off both the BTCC and British GT calendars for 2019.  Soon after it was announced that the site had been sold to Rockingham Automotive Limited and that all motorsport actiivities were to cease at the end of 2018.  Instead, the circuit was to be converted to an automotive logistics and vehicle storage centre.  Scheduled to be fully operational in 2019,  Rockingham will become the UK’s largest automotive site, with premium office space to rent in the Rockingham Building.

In January 2019, douncillors from the East Northants planning committee unanimously approved plans to remove the former grandstands from the site - and seemed very keen to wipe all traces of the circuit from the local landsape, ordering that all signage around town advertising Rockingham Motor Speedway must also be removed.

It proved a sad end to an exciting - if not ultimately fully-fulfilled - chapter in UK motor racing history.

Rockingham was located in central England, near to Corby in Northamptonshire.  The nearest international airports are Birmingham (57 miles) and East Midlands (61 miles) - both around 70 minutes drive from the former circuit.

Although the circuit layout remains for now, the former grandstands are set to be demolished and the site is being converted into an automotive hub and logistics centre.