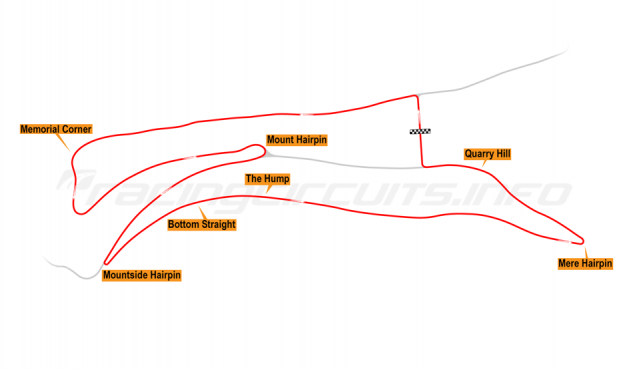 Scarborough might seem an unlikely mecca for motorcycle racing, but the wooded slopes above the coastal town have been hosting hugely popular road races for more than 70 years.  Oliver’s Mount is something of a throwback to a different era which has presented racers and their machines a unique and demanding challenge through the years.

England’s only natural ‘road’ racing track, Oliver’s Mount sits just five minutes’ from Scarborough’s town centre, with the races frequently being likened to a ‘miniature TT by the seaside’.

It’s origins lie with the enthusiasm of members of the Scarborough and District Motor Club, who began searching for a venue to hold road racing in the mid-1930s. Inspired by the classic road races taking place elsewhere, not least the Isle of Man, their first idea was for a 14-mile course at Seamer Moor, close to the seaside resort.  A rival option was to use the town’s former horse racing venue to create a 10-mile course, but nothing came of either proposal before the intervention of World War Two.

When peace returned in 1945 the club renewed its efforts and, with the support of the ACU and the Borough Council, began a search for a new venue.  In the more austere post-war years, costs were always to be a factor, so a much shorter circuit was now favoured. The slopes of Oliver’s Mount on the southern edge of the town quickly seemed favourable and plans for the 2.410-mile course were soon laid out.

The circuit was officially opened in September 1946 with the first race meeting following a few days later. Over twelve thousand spectators attended, beginning a love affair with the circuit and its thrilling racing which lasts right through to today.

By and large the original course followed the same course as today, though for the first two meetings the start was located in the middle of today’s Esses.  Those early racers were using machines more usually accustomed to the Mountain Course on the Isle of Man and the gearing soon proved unsuitable to the steeper inclines of Oliver’s Mount.  The ‘stop-and-start’ nature of the course with its tight hairpins saw the machines quickly burn out clutches, to the extent it was rumoured that there were none left for a 20 mile radius afterwards!

Modifications were made at the racer’s request for subsequent meetings, including widening the straights and a slight hollowing of the Mere Hairpin to ensure that riders didn’t have to make one-in-nine climb from a standing start. Practice and qualifying took place on Tuesdays and Wednesdays, with racing on a Thursday, until 1947 when racing was transferred to Fridays and Saturdays.  Sunday racing was not instituted until 1971.

From the outset the top riders of the day were eager to compete, including the likes of Denis Parkinson, George Brown and Sid Barnett.  The races were popular with the public too and from 1947 the BBC began radio broadcasts, some of which featured father-and-son commentary duo, Graham and Murray Walker.

Over the years the ever increasing lap speeds and progressively quicker machines have required a series of circuit improvements and alterations, though the focus has always been on ensuring safety rather than diminishing the challenge of the course.

Within a year of opening, around £7,000 was invested in improvements to the circuit width and enhanced parking facilities, with the start-finish relocated to its present position at Weaponness Farm from the September 1947 races onwards.  Then over the winter of 1949, the Scarborough Corporation began a two-year improvement plan, which involved spending £8,600 to upgrade the circuit to meet the standards required to gain an International permit. This included further course widening to at least 5 feet around the entire course, surface improvements and the banking of several corners.  The famous hump on the fast bottom straight was also eased and a new wide footbridge was constructed over Quarry Hill. With the improvements the circuit length had increased from 2.443 miles to 2.455 miles. Fencing was also strengthened at key points to help control the sometimes over-eager fans. The July 1951 meeting was thus the first run in compliance with the more stringent rules.

The next change was the re-profiling of the ‘Esses’ ready for the July 1954 meeting, which reduced the circuit length to 2.413 miles.  A new control building was completed in time for the July race meeting of 1956. The building was erected directly opposite the start and finish line in only nine weeks at a cost of £800.

Further circuit improvements took place in June 1958, when the majority of the course was resurfaced, with the Bottom Straight receiving its treatment by September of the following year.  It would not be until August 1973 when the next resurfacing took place to iron out a number of bumps which had developed in the intervening years and to combat a general deterioration of the facilities.

The circuit itself is owned by the local authority, with racing promoted since 1971 by Scarborough Racing Circuits Ltd (Combine of the Auto 66 Club & North East Motor Cycle racing Club, who hire the venue and are responsible for kitting out the track with the necessary straw bales for racing, plus toilets, extra fences, water, pathways and paddock facilities. A compensation payment also has to be made to the municipal café at the Memorial that cannot open during race days.

All of these requirements mean that large crowds are needed to cover the costs, so it is fortunate that the event was and remains popular with some of the top road race stars, many of whom regard it as ideal preparation for the Isle of Man TT. Names such as Geoff Duke, Eric Oliver, John Surtees, Bob McIntyre, Mike Hailwood, Barry Sheene, Giacomo Agostini, Jarno Saarinen and Phil Read all graced races here alongside many others, thrilling the crowds.

A series of poor weather events leading to low crowd numbers put the events at risk by the end of the 1970s and during the next decade the North East Motor Cycle Racing Club (NEMRC) dropped out of the Scarborough Racing Combine and the Auto 66 Club bought their shares in 1991.

Ever-spiralling lap speeds came to a head in September 1989, when Carl Fogarty lapped the course in a time of 1m 45.1s, a speed of 82.67 mph, on his way to winning the first leg of the ‘International King of the Roads’ (400cc-1000cc) race.  It was clear something needed to be done to slow the bikes and so a new chicane was added on the fast downhill approach to the start/finish line in 1991. The new ‘Farm Bends’ complex with its combination of right-left-right bends increased the circuit length from 2.413 miles to 2.430 miles.

In 1996 the Auto 66Club acquired the remaining shares held by the Scarborough and District Motor Club, leaving them in sole control of racing at Oliver’s Mount. Since then, the club has spent in excess of £500,000 on improvements.

At the 50th Anniversary celebrations in September 1996 a record crowd of over 63,000 people squeezed through the gates to see their heroes from yesteryear, who could between them boast 32 World Championships. The star line-up included 15 times World Champion Giacomo Agostini reunited with his former factory MV Agusta, Jim Redman on the fabulous Honda-6, Barry Sheene on a Suzuki RG500 and World Superbike Champion Carl Fogarty on his Honda RC45.

In 1999 a new pedestrian foot-bridge was built over Quarry Hill, replacing the old bridge which had its support struts located very close to the race track. Trees have been removed from along the bottom straight, safety fencing replaced/relocated and continuous widening and resurfacing work carried out around the circuit.

Mount Hairpin was renamed to Drury’s Hairpin in 2001, in memory of Peter Drury, a volunteer who had carried out duties as Team Leader at Mount Hairpin for many years. Peter also had a major role in the recruitment of Officials and Track Marshals for the Auto 66 club.

In 2003, the climb from Mere Hairpin to the footbridge before the Quarry was named as ‘Sheene’s Rise’, in memory of the British ace who had lost his life to cancer.  Oliver’s Mount remained a firm favourite circuit for Sheene, who won the Gold Cup International four times in 1973, ’74, ’79 and ’84, each time on a 500 Suzuki. He ended his Scarborough race career with 15 race wins, including the last one of his professional career in 1984. After retiring he delighted his loyal fans by making a further two guest appearances at Oliver’s Mount.

Finally, in 2004, the largest jump on the Bottom Straight was renamed ‘Jefferies Jump’ in honour of David Jefferies, who never failed to thrill the crowds with his spectacular high-speed wheelies along this part of the track. ‘DJ’ loved riding at Scarborough and was a record five times winner of the Gold Cup International Trophy, his first in 1992 on a 750 Yamaha, again in 1994 and ’97 on a Ducati and back-to-back victories in 2000 and ’01 for Yamaha.

Sadly, events at the 2017 Scarborough Gold Cup event proved disastrous for the circuit. During morning qualifying for the feature race, Jamie Coward crashed at Drury’s Hairpin and both rider and bike crashing through the fence into the crowd.  Coward was relatively unhurt but a number of injured spectators were treated at the scene for injuries. Two races then took place but in the third, the Junior B race, a crash involving Daley Mathison at the same corner resulted, sadly, in a similar outcome. With both ambulances leaving the circuit and two air ambulances despatched with the injured, organisers were left with little option other than to abandon the meeting.

An ACU enquiry would later exonerate club officials from any wrongdoing, even going as far to state that: “the actions taken by the officials on the day were correct, the serious incident plans in place at the circuit were robust and the actions of the on site medical team exemplary.”  However, a wider review of the safety at pure road racing venues made a number of recommendations, including the increased use of “recticel” protective barriers, strengthening of existing fencing at certain key points and the increased use of glance protection on existing post and rail fencing.

Despite considerable effort, funding for a number of the stricter safety rules could not be found, with the additional recticel barriers proving a particular issue.  This forced the cancellation of all racing right through 2018, save for the Oliver’s Mount Festival of Speed, run as a hillclimb event rather than a road race.

Sadly, the difficulties spelled the end of the Auto 66 Club’s involvement at Oliver’s Mount.  Instead the The Two Four Three Road Racing Association announced that racing was to return under its auspices in 2019, with the full backing of Scarborough Borough Council. With safety upgrades set to be completed, two meetings have already been confirmed; the Barry Sheene Classic on 27 and 28 July and the Gold Cup from 27 to 29 September. It should mark a new chapter for a venerable old circuit.

Oliver’s Mount Circuit is located on the southern outskirts of Scarborough in North Yorkshire, England.  The nearest airport is Durham Tees Valley Airport, around 45 miles away, with international connections via Amsterdam. Manchester Airport, around 120 miles to the west, offers a larger array of direct international flights.

By road the circuit is located off the A64 south of the town and also the Scarborough-Filey Road (A165).

There is no direct public transport to the circuit but the number 17 bus will stop at the bottom of the Mount near B&Q on Seamer Road. Check the current timetable at www.eyms.co.uk.

Find the best hotel and room deals near to Oliver's Mount: