Mallory Park is among the smallest tracks in Britain but has deservedly earned its reputation of 'the friendly circuit'. After a fraught period in recent years where a failure to observe noise abatement rules caused organising bodies to pull out and ultimately the failure of the operating company, the track is rebuilding its reputation under new management.

Owing its origins to grass track racing, the circuit grew from an asphalt oval to the road course seen today, though it remains one of the shortest in the country.

Among the highlights of the racing calendar are the annual Plum Pudding races, held on Boxing Day for cars and bikes, allowing all concerned to blow away the cobwebs after Christmas.

The circuit was built in the grounds of a manor house, Kirkby Hall, which can trace its ancestry right back to the Norman Conquest. The house eventually passed from the Mallory family to the church, only to come back into aristocratic hands when King Henry VIII claimed it after the dissolution of the monasteries. Various generations of the landed gentry then lived in the hall until 1941, when Herbert Clarkson died and the estate was sold off. During World War Two the hall was claimed for military use but after the cessation of hostilities it was abandoned before finally being destroyed by fire and demolished in 1952. The coachhouse and stable block are all that remain, now used as the circuit offices and workshops and a pub and restaurant.

The grounds around the lake were originally used as a pony trekking grass oval and, when the estate was purchased in 1953 by H.W. Moult of Derby, it was equestrian uses that seemed likely to be in its future. Nevertheless a local motorcycle group also used the oval for grass track meetings from 1948 to 1955. which proved a popular attraction. Mr Moult's plans seemed not to have been fulfilled, as he sold the estate on in 1955 to Clive Wormleighton, a motor racing enthusiast and the true father of Mallory Park.

Wormleighton was quick to realise the possibilities of motorsport on the estate and began to lay out a new permanent circuit, encompassing the oval and a new extension to a tight hairpin at its northern end. The new circuit was officially opened on April 26, 1956 when Bob Gerard completed a number of laps in a Cooper-Bristol and Maurice Cann lapped the track on a 250cc Moto Guzzi. In recognition of the assistance the local Grand Prix driver had given Wormleighton in the circuit's completion, the first turn was named 'Gerards'. The first races – for motorcycles – followed a few days later, while cars made their debut later in the year on Whitsun weekend.

Despite having one of the slowest corners in motorsport (Shaw's Hairpin), Mallory Park was fast, with much of the lap taken flat out. It soon became quite a favourite with the drivers and riders, while spectators also loved the fact that a large majority of the circuit was visible from most vantage points.

Into the 1960s, the circuit was purchased by London-based property company Grovewood Securities, several months ahead of their similar purchase of Brands Hatch. The company would later add Oulton Park and Snetterton to its portfolio. Under Grovewood's management, Mallory would enjoy a golden period, with some of the biggest names in two and four wheels turning out to compete at the Leicestershire circuit. Giacomo Agostini, Mike Hailwood, Barry Sheene and Kenny Roberts all wowed the crowds, while on four wheels non-championship Formula 1 events were held before the circuit became a fixture on the Formula 2 and Formula 3 calendars.

One notorious incident in the 1970s propelled Mallory into national consciousness, when BBC Radio 1 held one of its popular roadshows at the circuit. These were a combination of car races, guest stars and music performances, all broadcast live on the national radio station and in aid of charity. After previous events at Brands Hatch, in 1975 it was Mallory Park's turn to host. A crowd of 47,000 people descended, including a 'tartan army' of Bay City Rollers fans. Proceedings started well enough, when the DJs (accompanied by a Womble!) did a parade lap before racing got underway.

The broadcasts themselves were being handled from the small island in the lake, with the stars of the day being helicoptered in to perform. The Three Degrees duly arrived, quickly followed by the Bay City Rollers. Their arrival proved all too much for the teenaged fans, who broke across the track and began wading through the water to get to their idols on the island. The police quickly began escorting the girls back onto the banks and panicked officials decided it would be prudent for Les McKeown and co to make a hasty exit. But with the island overrun there was nowhere for the helicopter to land safely, so the pop stars were bundled into a small boat to cross the lake to the paddock. Unfortunately, this only made things worse, with fans almost pulling the pop stars overboard. Retreating to the marshal's post on the island, eventually the helicopter was able to whisk them away – ironically meaning they never actually got to perform for their adoring fans. It was certainly a bizarre day of entertainment, but it did no harm to Mallory's reputation.

Into the 1980s, Grovewood Securities decided to sell up, possibly due to the costs associated with keeping Brands Hatch as a Grand Prix venue and mindful of local competition from the re-opened Donington Park. After several false starts, racer and enthusiast Chris Meek was persuaded to purchase the track, which duly came into his ownership in time to ensure the start of the 1983 season.

While Mallory was still thriving as a motorcycle venue, the speeds of modern car racing had largely ruled out its continued inclusion on the calendars of the major four wheeled series. Formula 3 and the British Saloon Car Championship (forerunner to the BTCC) paid their final visits in 1982 and Meek focused his attentions on ensuring Mallory became a thriving club racing, track day and testing venue.

Bike racing continued at a high level however, thanks to visits from the British Superbike Championship and its forerunners. In 1986, the rising speeds of the bikes prompted the first circuit changes, with the addition of the Bus Stop chicane just after Shaw's Hairpin. This was followed in 2003 by the Edwina's complex, inserted ahead of the esses and named after Edwina Overend, who had been instrumental in finding Meek as a buyer and later became track manager.

In 2005, the leasehold on the circuit was acquired by the British Automobile Racing Club, who began a programme of investment which saw the modernisation of the pit and paddock. A new entry to the pits was installed at the beginning of the Esses, while new garages and other buildings followed a year later.

Following a dramatic 2005 edition of the British Superbikes round, where there were a number of serious collisions (not least a high speed tumble involving Karl Harris and Gregorio Lavilla at Gerards), the decision was take to slow the course once more. A new chicane combination, named Charlies and Stapletons, was added on the exit of Gerards, slowing the riders on the approach to Edwina's, where Ryuichi Kiyonari had also taken a nasty tumble. As with all the previous chicane editions, car racing continued to use the original circuit layout without interruption.

In recent years the circuit found itself embroiled in a row which threatened its very future. In 2013, local residents complained to Hinckley and Bosworth Borough Council that noise limits – in place since 1985 – were being ignored. With activity at the circuit having expanded considerably since the 1980s, the circuit was found in breach of its agreement, though the local authority had proved lenient in enforcing the action as it was keen to keep the long-standing business viable. Ultimately the courts fined the operator, Mallory Park Motorsport Limited, which ran the circuit on behalf of the BARC, and insisted the 1985 agreement should stand.

Unsuccessful in negotiating new agreements for additional 'noisy' days, Mallory Park Motorsport Limited went into administration in September 2013. The BARC said the restriction of 44 days of racing per year, allied with increased rent on the facility, made the business financially unviable. The future looked gloomy and the circuit closed down while a solution was sought.

The pair agreed new terms with the local council, which ensured the circuit was allowed 92 noisy days a year, with noise levels not exceeding 105dB, the same number as under a 1985 enforcement notice. However the number of lower noise days (less than 55dB) has been cut from 104 a year to 20, with an added requirement that there must also be one full quiet weekend each month.

The circuit reopened in 2014, though the change in ownership came too late for the circuit to be included on any racing schedules that year. It has, however, been able to organise a full calendar of events for 2015 and onwards.

Planning a visit to Mallory Park? Find the best deals near to the circuit on hotels, apartments and rooms to rent from the map below.

Mallory Park is located in the village of Kirkby Mallory in Leicestershire. The nearest international airport is East Midlands Airport, around 30 mins to the south, while Birmingham Airport is around 45 minute's drive to the south-west.

By road the circuit is easy to reach, being located just off the A47 between Leicester and Hinckley and easily accessible from the M1, M69 or M6. From the M1 junction 21 and M69 junction 3, follow the B4114 towards Narborough. At the first island turn right onto the B582 signposted Enderby and follow this road to the junction with the A47. Turn left at the traffic lights and follow the brown tourist information signs to reach the circuit.

By rail, the closest train station to Mallory Park is Hinckley, located just 5 miles away from the circuit. 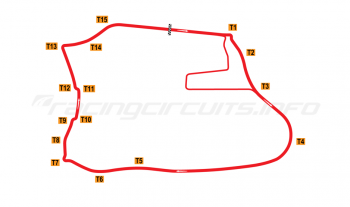 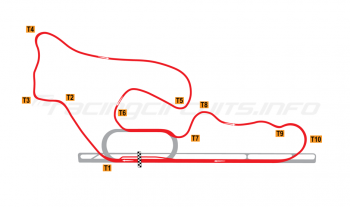 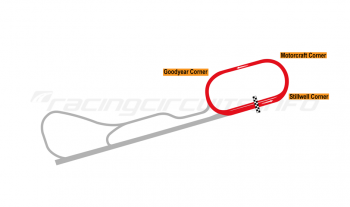