Kirkistown Race Circuit has been a mainstay of Northern Ireland’s racing scene since the 1950s, owned and operated by the Five Hundred Motor Racing Club.

Based on a former World War Two RAF airfield, the circuit is a flat and short blast along former runways and perimeter roads.

Steady development over the years has seen the circuit improve from its rather sparse facilities when first opened to today’s modern circuit, with clubhouse, permanent pit and paddock buildings and even a restaurant to cater for race goers.

Located near the bottom of the Ards Peninsula in County Down, Kirkistown began life as RAF Kirkistown. It opened in July 1941 as a satellite station to nearby RAF Ballyhalbert, featuring three concrete runways. The RAF passed the airfield on to the Navy towards the end of the war, who in typical fashion declared it a ‘ship’ and renamed the base as HMS Corncrake II. Although not in use as an airfield these days, it still has an official call sign.

At the end of hostilities, the airfield was surplus to requirements and fell dormant, creating an opportunity for local motor racing enthusiasts. The Five Hundred Motor Racing Club had been formed in 1948 to promote affordable racing., taking their name from the popular 500cc single seaters that were in vogue at the time. Initially the club organised events at Newtonards Airfield but the difficulties of fitting in around a working aerodrome saw them begin to look elsewhere.

In 1953, the Club was able to negotiate a lease to use the now abandoned Kirkistown and organised its first meeting. The course was similar to today’s, laid out on the perimeter roads and runway of the northern portion of the airfield. Straw bales marked out the route of the course, while race control (as it was for many years) was in an old double decker bus parked on the infield.

Dick Lovell Butt had the distinction of winning the first Formula Libra race in 1.5s/c Griffin Maserati, circulating at an average of 71.406 mph. By comparison, today’s lap record is held by Philip Shields in a Dallara GP2 car at 107.184 mph.

Kirkistown features a number of unusual corner names, the origins of which are explained below:

Racing soon began to thrive at the circuit, with both car and motorcycle events quickly being established. The 500cc single seaters inevitably played a major part of this and the circuit began attracting some significant drivers to its races. These included Le Mans winner Ivor Bueb, who won the 500cc Championship of Ireland at Kirkistown in 1957, just two weeks after his victory in the French classic, F3 Champion Don Parker and many others.

During that time the ingenious Belfast-built McCandless car made its debut, created by the legendary Rex McCandless. It was the only 500cc car to feature four wheel drive and held the outright lap record at the circuit for a while. It, along with a lot of other historic machinery, is now to be found in the Ulster Folk & transport museum at Cultra.

Formula Ford would become synonymous with the circuit during the late 1960s. Introduced in 1967, the cars came to Kirkistown the following year and have been a fixture ever since. The Irish championships have become acknowledged as among the most competitive in the world and today three races per year prove a major draw.

Into the 1970s, the Club was able to buy the lease for the circuit outright, giving long-term stability. This in turn has allowed for a gradual investment in the facilities, transforming the track from a converted airfield into something more permanent.

In 1971, Kirkistown hosted an International Formua 3 race, backed by GKN as part of Ulster ’71 celebrations. Colin Vandervell ran out the winner in a Brabham BT35. Among the entry was future World Champion, James Hunt, who commented that the track was likely to produce a slipstreaming race and while bumpy, he thought it was enjoyable but could do with some more corners. He didn’t get much chance to find out, as he crashed out on lap one…

At the end of the decade the first major changes came to the course. As well as some general resurfacing, James Hunt got his wish, with a new chicane added on the back straight. At the same time, the Fisherman’s corner was slightly re-profiled into a more sweeping curve, removing the squarer profile of the old runway perimeter road.

A more fundamental change was made at Colonial corner, which was modified to cope with the rising approach speeds. It was brought forward and eased slightly, making it faster and giving a longer run-off for those having difficulties getting slowed - commonly referred to as “going the long way round”.

The chicane was amended in 1987, when it was enlarged and tightened to slow speeds. At the same time, the back straight was re-aligned, moving half a width towards the infield, necessitating a slight re-profiling of the final turn, with the hairpin being widened.

In recent years a development programme has seen the pits and paddock area transformed. In 2000 the circuit received a proper pit lane for the first time in its history - previously cars just exited the track straight into the paddock area, there being little call for pits stops in club races.

In 2004, this was further augmented by the construction of a new Clubhouse, pit garages, a scrutineering bay and a new paddock toilet block with showers and a dedicated room for marshals.

The paddock facilities were further improved with the construction of garage block (with six double garages), a new scrutineering bay, marshals room and paddock toilet block.

The most recent change came in 2020, when the Armco barriers forming the pit wall were removed and replaced with a concrete retaining wall in line with the latest FIA regulations.

Club racing continues to thrive, with a variety of single seat, saloon car races and sprint events throughout the year. The ever popular Formula Ford 1600 championships are a highlight, culminating in the end of season Martin Donnelly Trophy meeting, which ranks in importance alongside the Formula Ford Festival at Brands Hatch and the Walter Hayes Trophy at Silverstone.

There are usually three big motorcycle race meetings every year. These are hosted by the Belfast & District Motor Club . Their Easter Monday meeting generally has huge crowds .

Motorcycle track days are catered for by ML Events and run at least once a month, from March to October. Car track days run from February to November. The main provider of these is Trackskills, although the Lotus Club of Ireland, The Porsche Club and the Armagh Motor Association also run sessions.

Planning a visit to Kirkistown? Find the best deals near to the circuit on hotels, apartments and rooms to rent from the map below.

Kirkistown circuit is located southeast of Newtownards on theArds Peninsula, in County Down, Northern Ireland. The nearest international airport in George Best Belfast City Airport, a 45 minute drive from the circuit.

By car, from Newtownards take the A20 and it is approximately a 20 minute drive to the circuit. Keep on the A20 to Kirkcubbin and then turn off to the left after the village onto the Rubane Road, signposted to Portavogie and Kirkistown. If coming from the south, take the A25 to Strangford, then the ferry to Portaferry, which is five miles south of the circuit. 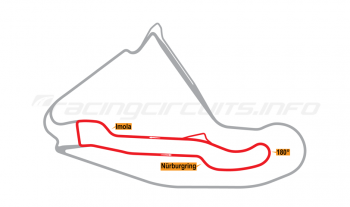 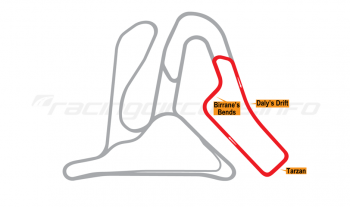 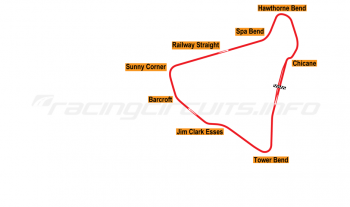