The fastest of Northern Ireland's clutch of road racing circuits, Dundrod is the home of the annual Ulster Grand Prix for the bravest of the brave on two wheels and remains one of the most popular events on the road racing calendar.

The circuit comprises a roughly hexagonal layout, utilising the B38 Hannahstown Road between Glenavy and Hannahstown; the B101 Leathemstown Road from Leathemstown Corner to Dundrod and the B153 Quarterland/Tornagrough Road from Cochranstown to the road junction of the B38 at the Lindsay Hairpin.

Financial difficulties caused by poor weather and sparse crowds at the 2019 event, subsequently exacerbated by the coronavirus pandemic, resulted in the cancellation of the race in 2020 and 2021.  It is hoped that the event can take place once more from 2023 onwards.

While motorcycle racing has dominated the majority of the circuit's history, it was actually four-wheeled action which brought it to fame originally. First used in 1950 for the RAC Tourist Trophy automobile race and the Formula One (non-championship) Ulster Trophy (1950-1953), the track achieved a fearsome reputation for being flat out but taking no prisoners. The heavily-cambered rural roads were designed to achieve the best possible drainage in what is very often a wet part of the world, meaning drivers could easily be caught out when cornering just as much as by the crests, dips and changeable road surface.

Given the skill required to tame such a circuit, it perhaps comes as no surprise that Stirling Moss proved one of the masters of Dundrod, winning the Tourist Trophy for Jaguar in 1950 and 1951, as well as for Mercedes in 1955. He was less successful in the Ulster Trophy, which saw other stars of the day with better machinery taking the spoils; Peter Whitehead's Ferrari and 1950, Giuseppe Farina's Alfa Romeo 159 in 1951 and Piero Taruffi in a Vandervell-entered Ferrari the following year. The 1952 event is remembered for the unusual sight of Moss and Fangio navigating the country lanes in the innovative but recalcitrant V16-engined BRM; neither would finish the race that year.

However, it is the 1955 Tourist Trophy which is remembered the most and, unhappily, not for the best of reasons. Going into the event, the importance of the race was underlined by the dazzling array of machinery entered; three works cars each from Mercedes, Ferrari, Maserati, Aston Martin and Porsche, while Jaguar sent a singleton D-type. It was the first round of the World Sports Car Championship after the dreadful Le Mans tragedy and, while the battle for the win was hard-fought, tragedy further down the field would again serve to highlight the mixed abilities of the drivers accepted by the organisers.

The race was scheduled for 600 miles and would take more than seven hours to complete. At the outset, Moss raced off into the lead in his Mercedes 300SLR, hotly pursued by Mike Hawthorn's Jaguar D-Type. Moss blew a tyre and had an extended pitstop while the Mercedes mechanics ripped away bodywork damaged by the flailing tyre, handing the lead to Hawthorn.

On lap two, tragedy stuck when a string of drivers became caught up in a collision at Deer's Leap. French amateur driver Henri du Barry was being passed by Jim Mayer's Cooper but was inadvertently squeezed off the road as he did so, striking a gate post and exploded into flames. Caught up in the melee were Bill Smith (Connaught), Friedrich Kretschmann (Porsche), Peter Jopp (Lotus), Jim Russell (Cooper), Ken Wharton (Frazer Nash) and Lance Macklin (Austin-Healey). Mayers and Smith were killed, while Wharton was badly burned. Officials later excluded du Barry from the race.

On the drivers pushed through a treacherous rainstorm which caught out many, including Jean Behra who left the road in his Maserati, breaking an arm and losing his right ear in the process; he would wear a prosthetic for the remainder of his life. Sadly, the carnage claimed one further fatality, when at around mid-distance, Dick Mainwaring died when his works Elva turned over and caught fire.

The race continued nevertheless, with Hawthorn's Irish co-driver Desmond Titterington was putting his familiarity with the roads to good use and all but matching Hawthorn's earlier pace. Moss's co-driver John Fitch was slower (in the lead up to the race he had been vocal about the safety of the circuit), so after a 30 minute stint, 'The Boy' was put back behind the wheel, with more than two minutes to make up.

So began an epic fightback to second place, but despite his best efforts, Moss could not catch Hawthorn. Then with two laps to go the Jaguar blew its engine and Hawthorn was out. Moss inherited the lead and cruised to victory ahead of his team mates Fangio and Karl Kling, with the third works Mercedes of Wolfgang von Trips and André Simon in third.

Even by the standards of the day, the race had proved a tragic affair and the questionable road conditions and laughable level of safety measures probably should have led the race being flagged sooner. With three lives lost the writing was on the wall for Dundrod; it would prove to be the final event for cars on the high-speed circuit.

Racing continued apace on two wheels, however. The Ulster Grand Prix had moved from the Clady Circuit in 1953 and it was this event which would now prove the yearly headliner. Dundrod was part of the FIM World Championships from 1953 until 1971, with a host of legendary names taking part. Geoff Duke, John Surtees, Bob McIntyre, Mike Hailwood, Phil Read, Jim Redman, Bill Ivy and Giacomo Agostini all take multiple wins.

In 1965 the circuit underwent the only significant change in its history, when the section diverting over Leathemstown Bridge was by-passed and the hairpin was modified, making the corner less severe and shortening the lap to 7.401 miles (11.910 km). The new hairpin was much later named in memory of Darran Lindsay, who lived on the Dundrod circuit route and was killed during practice for the 2006 Killalane road races, near Dublin.

In 1971 Australian Jack Findlay took victory for Suzuki, in what was also the first win by a two-cylinder engine in the 500cc class. Northern Ireland's troubled political backdrop forced the cancellation of the race in 1972 and when it resumed in 1973 it was no longer a World Championship round, instead being designated an international race for the British and Irish road racing specialists.

In 1978, the newly-introduced World Formula One, Two and Three Championships included a round at Dundrod and did so until 1990. This period coincided with the rise of local hero Joey Dunlop who remains the most successful rider ever at the Ulster GP with 24 wins to his name. Ron Haslam, Graeme Crosby, Jon Ekerold, Roger Marshall, Steve Hislop and Carl Fogarty were just some of the other names to enjoy success at the Ulster during the 1970s and 80s.

The last F1 round was held in 1990 and since then, the Ulster GP has, like the North West 200 and Isle of Man TT, been a stand-alone event, continuing to be held in its traditional early August slot. Dunlop was equally successful during the 1990s along with brother Robert and fellow countryman Phillip McCallen.

Welshman Ian Lougher is the second most successful rider at Dundrod with 18 wins to his name followed by McCallen (14) and Guy Martin and Bruce Anstey (both 11). McCallen was the only rider to win five races in a day, achieving this feat in 1996, before being matched in 2019 by Peter Hickman, who also achieved the so-far unique feat of winning all seven races. In the process Hickman set a new lap record of 136.415mph, eclipsing his 2018 Isle of Man TT average to re-establish Dunrod as the fastest road racing circuit in the world.

Racing grinds to a halt

The onset of the coronavirus pandemic in 2020 brought racing to a halt, though in truth the event was already in financial difficulties thanks to the poor weather of the 2019 event leading to the lowest ever spectator attendance.  It was therefore already doubtful racing would have taken place anyway.

On top of this came controversy, when in August 2019 a BBC Northern Ireland news report claimed that £230,000 of a £255,000 grant issued in 2017 by Sport NI had been spent incorrectly.  Instead of being used as intended for safety upgrades, the majority of funding was used to refurbish the David Wood clubhouse, as well as building new shower and toilet facilities and the improvement of disabled access in the paddock.  Only £25,000 was actually used on new safety bales, according to the BBC report.

Ulster Grand Prix organisers hit back, issuing a statement denying that any money had been used incorrectly and that Sport NI was "fully aware" of how the money was to be spent.

"The Ulster Grand Prix adhered to a rigorous application process which was subject to government scrutiny before we received the funding to carry out improvements at Dundrod." Noel Johnston, Clerk of the Course, said. "Safety was an important consideration in that application but it was not the only factor.

"The money we received has been used to make significant improvements on the course and in the paddock, enhancing the experience of everyone involved in the Ulster Grand Prix each year."

The episode only served to illustrate the difficulties the event was operating under, however.  By 2020 the Dundrod Club was issued with a winding up order having accrued debts of over £300,000. The race organisers entered into a voluntary agreement with creditors to pay the money back.

As coronavirus restrictions eased, it was hoped racing would return but 2021 came and went with no action on the track.  Then in 2022 came the announcement that the Ulster GP has been taken over by the Revival Racing Motorcycle Club, which aimed to bring back the event on 16-20 August.  However, that too fell by the wayside when expected funding from Tourism NI for both it and the North West 200 event failed to materialise.  In a statement, the Government agency said that the amount requested was six times that obtained for 2019 event and it could not justify this amount of public funding.

It meant that the race was called off on what would have been its centenary.  Instead a day of celebration event was held in the paddock area on August 20, with displays of contemporary and classic machinery and 100 riders given the chance to lap the circuit in a special demonstration run.

Planning a visit to Dundrod? Find the best deals near to the circuit on hotels, apartments and rooms to rent from the map below.

Dundrod Circuit is located near the village of Dundrod in Lisburn, Northern Ireland. Belfast's airports are both just over a 20-minute drive away.

The start/finish area is located on the B38 Hannahstown Road, though access is via Rock Road (B101), Flowbog Road/Rusheyhill Road when roads are closed for racing. 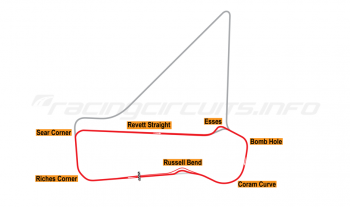 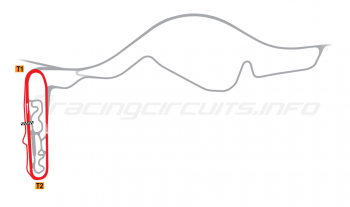 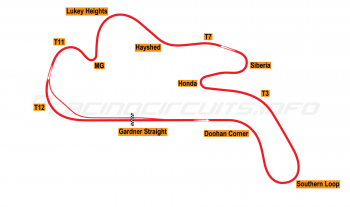