Croft Circuit is yet another of England's ex-airfield circuits, emerging from the Second World War with a new use for motor racing. After a fallow period in the 1980s, the circuit has re-emerged in recent years to become the premier motorsport facility in the north east.

Blending a mixture of high speed and low speed corners to produce a real challenge, the 2.1 mile-circuit has staged most of the major national championships since reopening in the 1990s.

Today the British Touring Car Championship is the headline event, alongside a full programme of club racing on two and four wheels.

The Croft story begins in 1940, when 160 acres of farmland near to the village of Dalton-on-Tees, just south of Darlington, was purchased for the war effort. A standard Bomber Command three-runway airfield duly sprang up and by October 1941 it was operational, acting as a satellite station to RAF Middleton St George (which today is better known as Durham Tees Valley Airport).

The concrete runways became the home of Wellingtons, Whitleys, Stirlings, Halifaxes and Lancasters during the conflict. After the war, the station was renamed RAF Neasham, though it was soon closed for flying in the summer of 1946 when it was mothballed by the RAF. A lease was subsequently acquired by a local businessman to continue using the site as an airstrip, but these plans foundered after a few years.

As was often the case in post-war England, local enthusiasts soon saw the potential of the runways and perimeter roads for racing. The Darlington & District Motor Club began organising events for cars and motorcycles from 1948, using the majority of one of the runways and the perimeter roads at the southern end of the aerodrome. By 1950, the circuit was approved by the Royal Automobile Club and a full calendar of events was organised for the course.

The Neasham circuit soon gained popularity thanks to its large catchment area for spectators, there being very few alternative locations to watch racing within a sensible travelling distance. When the original lease expired in 1962, a consortium of enthusiasts led by Bruce Ropner bought the northern half of the old aerodrome and set about creating a more permanent facility. Planning permission was obtained within 18 months and the new circuit was completed in July 1964.

Roughly triangular in shape, the new 1.64 mile course (though at the time officially measured at 1.7 miles) consisted of two long straights, a fast esses, three tight corners and an unforgiving chicane built out of railway sleepers. None of the Neasham airfield circuit was retained and in its new guise, the circuit took on the name of Croft Autodrome for the first time. Ropner was among the first to lap the new course in his Jaguar XK150.

Facilities were fairly basic - the race control tower was fashioned from a converted lorry and the paddock was a cinder-covered area towards the esses – but it retained its popularity nonetheless. The first meeting on 3 August 1964 attracted a crowd of between 30,000 and 50,000 people, which no doubt caused near chaos at meeting's end when they all converged on the narrow tunnel north of the pits, which was the only access and egress to the infield.

An eclectic series of (mainly) club competitions made Croft their home, the highlight of each year being the Battle of Britain Meeting, which saw the circuit's RAF heritage celebrated with an interesting (and possibly unique) line up of two, three and four-wheeled action.

In 1970 the Guards International Trophy for Formula 3 cars was run at Croft, future Grand Prix winner Carlos Pace taking victory. Other notable names to race at the original croft were Denny Hulme and James Hunt, while Niki Lauda and Damon Hill also had early-career races here.

By the 1980s, however, the track surface had deteriorated considerably and, faced with a large bill to bring the circuit up to modern safety standards, the difficult decisions was taken to close the circuit. Fortunately, George Shields (a local farmer) had a good relationship with new land-owner Bill Chaytor. They came to an agreement to create a rallycross circuit at the site, using part of the old circuit, in the process creating the only purpose-built venue for the sport in the country. By April 1982 (less than six months after closing for "the final time") Croft Circuit echoed to the sound of competitive cars once again.

The track started at around a mile long running out to Tower and back down the middle runway but, gradually, a shorter, more spectator friendly, circuit emerged and was to provide exiting motorsport for the next ten years. Croft soon became the pre-eminent rallycross venue in the country, hosting FIA Inter-nations Cup events of 1987 and 1990 as well as the 1994 British round of the FIA European Rallycross Championship.

In 1994, the success of rallycross persuaded Croft's owner (by then Kate Chaytor-Norris), to try circuit racing once more. The old circuit was largely restored, this time with a chicane complex on the railway straight and a revised Hawthorn Bend section. On Sunday 14 May, 1995 a trial road race meeting was held, organised by the Historic Sports Car Club. About 30 cars took part in this non-championship event with some of the old-Croft Circuit regulars such as Jim Evans, Eddie Falkous and Paul Gibson making a return.

A three day event quickly followed, paving the way for Croft's return to the motor racing calendar, organised once again by the Darlington & District Motor Club. Encouraged, ambitious plans were then laid to return top level national racing to the north east by 1997. A £1.5 million scheme to redevelop the site was announced, with the major improvements completed in little over six months.

The circuit was extended to 2.127 miles, with more than 60 percent of the lap now using the old runways. Gone was railway straight and in its place was a new infield complex and start/finish straight, rejoining the old circuit just before Hawthorns. Permanent garages and a control tower were installed for the first time and spectator banks built at a variety of points. In spectator and competitor amenities alone, it was a night and day difference to the old autodrome's basic facilities.

The aim was to capture a round of the prestigious British Touring Car Championship, by then the top-level of national motorsport and, arguably, the most competitive in Europe. That dream was realised in June 1997, when Alain Menu ran out as a double winner in his Williams-run Renault Laguna.

Croft has remained a BTCC mainstay ever since, with the summer round being the largest event held at the circuit. British GT and F3 also visited for a number of years until 2008, with the outright lap record being set at 1m13.656s by Sergio Perez in an F3 Dallara. British Superbikes also added Croft to their calendar in the 2000s, though departed after the 2011 season.

In 2006 the circuit was bought by the British Automobile Racing Club (BARC), adding it to its small roster of circuits alongside Thruxton and Pembrey.

A protracted legal battle brought by local residents began in 2000 and was finally resolved in the Appeal Court in 2009. This saw an injunction imposed on the circuit, limiting "noisy days" to 40 per year. This has not significantly affected the race calendar continues to operate its major race days which account for the vast majority of its revenue.

Planning a visit to Croft? Find the best deals near to the circuit on hotels, apartments and rooms to rent from the map below.

Croft Circuit is located at Dalton-on-Tees in North Yorkshire, around six miles south of Darlington.  The nearest international airport is Durham Tees Valley, around 11 miles to the north east of the circuit, offering domestic and a small number of European destinations.  Newcastle Airport is an hour to the north offering significantly more European and several international destinations.

If travelling by car, the circuit is located a few miles from the A1 (M) motorway.  If heading from the north, take junction 58 off the A1(M) signed Darlington. Follow this route through Darlington, then take the south A167 towards Northallerton.  If headed from the south, exit the A1 (M) at junction 57 towards Darlington.  At the second roundabout, take the fifth exit and take the A167 towards Northallerton.  Croft Circuit is
signposted approximately 2 miles south of Croft on Tees.

Public transport options are somewhat limited, though the nearest railway station is at Darlington, offering connections to Newcastle to the north and York and London to the south.  You will likely require a taxi journey to and from the circuit, particularly as the bus service from Darlington to Northallerton does not run on Sundays. 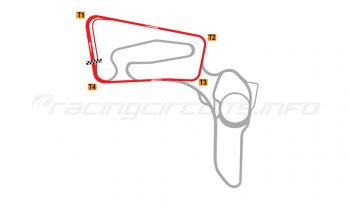 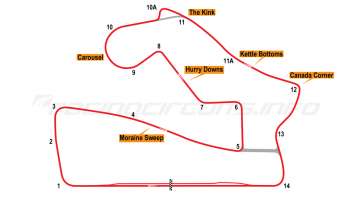 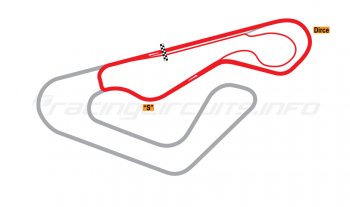