Charterhall airfield in Berwickshire was where Scottish motorsport became firmly established and was the venue to host its first-ever international-standard race. A former RAF airfield, Charterhall went on to host some of the world's top drivers, as well as being the venue for Jim Clark's first ever race.

As with the Winfield circuit before it, facilities at Charterhall were no more than basic and substantial funding would have been needed to keep racing going.  The opening of the Ingliston Circuit near Edinburgh was the final straw and racing ceased after the 1964 season.

Built originally as a World War I landing ground and named Eccles Toft, the airfield was extensively reconstructed in 1942 and was used mainly by No. 54 Operational Training Unit during World War II. Pilots based here learned their night-fighting craft in Bristol Blenheims and Beaufighters. The RAF left in 1947 and the airfield was officially closed, after which it was returned to farmland.

However, it wasn't to remain dormant for too long. When it became clear to the Winfield Joint Committee that continuing at their original home was not possible, Charterhall was an obvious candidate, given that it was Winfield's parent airfield and only just over 10 miles away. So it was that in 1952, Charterhall began its swift rise to prominence.

Similar to Winfield, the runways and perimeter roads leant themselves to forming a two-mile circuit, complete with a long main straight. The committee approached the ground's owner, Major Henry Trotter, who was happy to let race meetings be held there, as were the farmers on whose agricultural land the circuit lay. So it was that the first of what would be 12 years of racing at Charterhall began on 6 April 1952, when a Formula Libre event took place.

For the first few seasons the Joint Committee ran the meetings, before ceding responsibility to the Border Motor Racing Club. In just a few years it was established as the premier venue in Scotland, a status which was reinforced when the Royal Automobile Club granted a permit for the first ever international event in Scotland. This took place on 6 August 1955, featuring top names such as Sir Stirling Moss, Mike Hawthorn Roy Salvadori, Giuseppe 'Nino' Farina and, of course, local ace Jim Clark. Scottish newspaper the Daily Record ran buses from Killermont Street in Glasgow to its Trophy races, so important was the race deemed.

Often the races would feature a mixture of cars and motorcycles, meaning the spectators got to see some of the top and emerging talents on two and four wheels in a single weekend. Among bike racing's heros to showcase their talents were local aces Bob McIntyre and Alastair King. By the beginning of the 1960s, Charterhall was also running stand-along motorbike events, with up to 400 riders taking part across multiple classes in 1961.

However, the relatively basic setup of the facilities meant that it was probably only a matter of time before either major investment was needed to further its development or a move elsewhere would be needed. Bike racing paid its last visit in 1962 and the final curtain call for cars came with the opening of the Ingliston Circuit near Edinburgh. The 1964 season would proved the last at Charterhall before racing made the switch. By then, Charterhall had firmly established its place in the chapters of Scotland's racing history.

Charterhall Circuit was located in the Scottish Borders and the historic county of Berwickshire, between the village of Greenlaw and Duns.

No longer used for racing, today Charterhall is still used as an airfield and for agricultural purposes. There is little evidence of the site's former use as a circuit, though the main straight and perimeter roads which made up the circuit are still visible. The race control building has disappeared, along with the grandstands which were only ever temporary structures.

Until the mid-2010s, the airfield still had a motorsport connection, as it was included as a special stage on the Jim Clark Rally for many years. 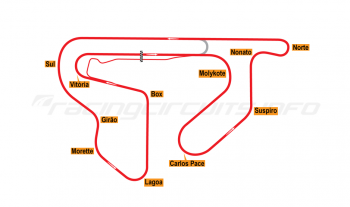 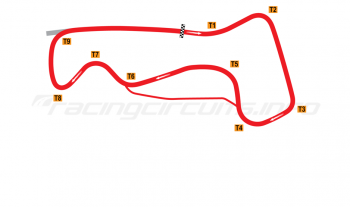 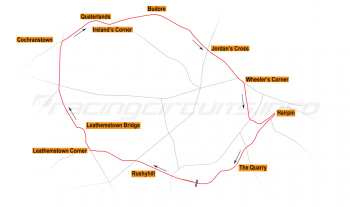