Cadwell Park is English motor racing's hidden gem, a roller-coaster ride of a circuit tucked away in the Lincolnshire countryside. Too narrow for anything other than club-level car events, it is bike racing which is king at Cadwell and the annual visit of the British Superbikes is one of the most popular events of the year.

Perhaps something of a best-kept secret in the four-wheeled motorsport world, once discovered, it is often a firm favourite amongst many who visit, whether as a spectator or participant.

As the circuit's reputation continues to build, there are an increasing number of club car events taking place at the circuit including the Historic Sports Car Club's Wolds Trophy and the popular Vintage Sports-Car Club Festival, along with vintage and classic motorcycle events and spectacular rallies.

The land on which the circuit sits was originally the parkland surrounding the long-since demolished Cadwell Hall. It was purchased in 1927 by Mansfield Wilkinson who held sporting aspirations for it from the beginning, intending it to be used for shooting competitions. However, his son Charles had interest in another sport; motorcycling. Founding the Louth & District Motor Club in 1932, Charles eventually persuaded the elder Wilkinson to allow him to organise bike meetings using the chalk trails on the site.

These events, starting in 1934, were essentially grass track affairs, with only the former entrance road to the hall (the modern Hall Bends section) featuring anything like a paved surface. Nevertheless the appetite of the club had been whetted and when the 1937 August Bank Holiday affair had to be cancelled due to heavy rains leaving the course unfit for use, a more permanent solution was sought. By the time of the 1938 event, a number of sections of track had been relaid in concrete and the first true Cadwell circuit was born.

The course featured a short blast from the start/finish towards a climbing left hander, called Mountain Ascent, before running through a twisting section under the cover of trees (Hall Bends) to a tight hairpin, down a short straight to a right hand corner past a barn and back to the start.

After two seasons of use, the war would intervene, but in peacetime the club was quick to bring back racing. On Good Friday 1946 an estimated 12-15,000 turned out to watch the first post-war motorcycle races at Cadwell Park, with Mansfield Wilkinson himself dropping the flag to start proceedings. Throughout the rest of the decade, Cadwell Park continued to organise meetings each bank holiday weekend.

In 1951, plans were submitted to extended the course by adding a new loop which would see the cars bypass Mountain Ascent, travelling along an extended straight to a return loop, rejoining the original course near the original Mountain section. The changes were in part aimed at attracting car racing, in particular the new Formula Three racers and were duly approved by local authorities. The extended track was completed in time for the August Bank Holiday events in 1952 and in the coming decade cars would often also be included on the bill alongside motorbikes.

Cadwell as we know it today first debuted in 1961, when Charles Wilkinson purchased adjoining land to allow a further extension to take place. This saw the track grow to its present 2.25 miles with the addition of a fast new loop at its southern end, largely replacing the 1952 loop altogether. This opened for the August Bank Holiday meeting, with Dennis Pratt taking wins aboard 350cc and 500cc Nortons, just as he had at the inauguration of the 1951 circuit.

The first car-only meetings came in May 1962, Tony Brooks lapping the circuit in a 1958 Ferrari Testa Rossa as part of the celebrations. Formula Three would prove the highest category of single seaters to race here, continuing into the early 1980s and memorably seeing the likes of Nelson Piquet and Ayrton Senna take to the grid in the early parts of their careers.

Perhaps fittingly, given its origins, bike racing has always provided the major draw at Cadwell and during the 1960s and 1970s, some of the brightest stars of two-wheeled racing pitched up to test their mettle against the demanding Lincolnshire course. Mike Hailwood, Giacomo Agostini, Bill Ivey, Phil Read and many others would draw in crowds of up to 60,000 – more often than not to see the superstars beaten by local ace and Cadwell specialist Derek Chadderton.

The Wilkinsons eventually sold out to Grovewood Securities (then owners of Brands Hatch, Oulton Park and Snetterton) and into the 1980s, the narrowness of much of the circuit led to a discontinuation of major car racing. Club-level events continued, generally using the rather unique Club Course. This largely consisted of the loop added in 1961, but saw competitors grid up as usual on the start finish straight but diverting the Mountain section at the end of lap one through a tight hairpin which lead back to Coppice corner. A separate timing loop was installed just after Mansfield, leaving the course in the unique position (at least in the UK) of having different start and finish locations.

In 1988 a chicane was inserted after Mansfield Corner for bike races using the full course, in a bid to slow the more powerful bikes through the approach to The Mountain. This actually utilised a small part of the 1951 course but was not greeted with enthusiasm by the riders. After its use during 750cc Formula One races, it was quietly forgotten and bikers reverted to the original course once again.

At the end of 1990s and two of the more notable features at Cadwell Park were no more. The barn at Barn Corner was demolished to create greater run off, along with the small cottage just after the hairpin, complete with its white picket fence bordering the track. This was apparently lived in for many years by an old lady, who would go away to stay with friends and family during race meetings. Just as well as, during a race in the mid-1980s an errant Mistubishi Starion ended up careering through the wall...

The adjacent barn building had long been a favourite vantage point for brave photographers and it is rumoured that it was a condition of the circuit's licence that the barn doors had to be kept open during race meetings to provide an escape route for cars overshooting the corner. Whether it also stipulated the agricultural machinery inside should also be removed is lost in the mists of time!

Modifications to the pit lane entry came in the mid-1990s but precious little else would change at the circuit until, in common with all the former Brands Hatch Leisure circuits, Cadwell came under the ownership of Jonathan Palmer's MotorSport Vision concern in 2004. As was to become common at all MSV circuits, there followed a general sprucing up and upgrading of facilities which, truth be told, had become rather run down and outdated in the previous years. The most tangible change at this time was the creation of a new chicane for bike racers, further towards the Mountain. It's still not popular with riders but with the increased speed of modern machinery, is mandatory for all bike races. Cars continue to use the original course chicane-free.

In 2005, a significant safety improvement came when Palmer managed to acquire a small strip of farmland beyond the hairpin (apparently at quite some expense) in order to extend the run off. Similar improvements came at Barn Corner in 2010 (which involved the filling in of the lake immediately behind the barriers, also improving spectator sight lines in the process) and at Chris Curve in 2012. More recently, a new footbridge was added, linking the spectator areas opposite the pits with those at the Mountain and providing significantly improved access to the paddock.

MSV harbours plans to create a new circuit extension, possibly utilising land behind the current paddock, to create a longer and wider new course that could entertain a greater range of car and bike racing. Whether these ambitions come to pass only time will tell but it is to be hoped that any changes retain Cadwell's unique status as Britian's mini-Nürburgring, providing a stern test of man and machinery.

Planning a visit to Cadwell Park? Find the best deals near to the circuit on hotels, apartments and rooms to rent from the map below.

Cadwell Park is located near to the village of Louth in Lincolnshire, England.   The nearest airports are Humberside (26 miles), Robin Hood Airport Doncaster Sheffield (49 miles) and East Midlands Airport (77 miles).

Arriving by road, the circuit is located alongside the A153, which if you are approaching from the south can accessed from the A1 motorway. Coming from the north or west, use the A1, M1 or M62, then take the M180 to Brigg, then the A1084 to Caistor.

The nearest railway stations to the circuit are Market Rasen and Lincoln, from where a taxi will be needed to get you to the circuit. 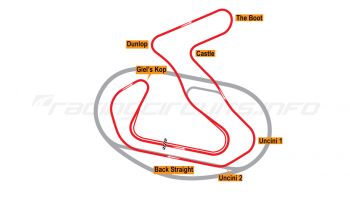 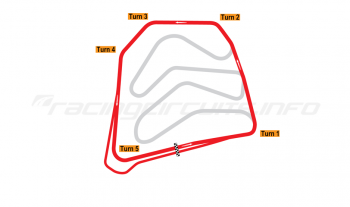 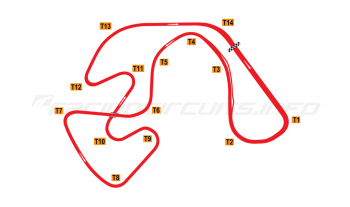