Merseyside has reverberated to the sounds of racing cars as well as horses' hooves at the home of the famous Grand National steeplechase, Aintree.

While the Grand Prix course is now but a memory (albeit still there in its entirety), the smaller club circuit still hosts motorcycle racing and car sprint competitions and testing and is very much alive and well.

The idea of combining horse and car racing facilities was not unique but still relatively unusual when it was first conceived at Aintree in the 1950s. Struggling to make the National Hunt course pay its way with just a few meetings a year, Aintree owner Mirabel Topham hit upon the idea of building the car course shortly after a visit to Goodwood.

In a something of a masterstroke, the CSI (the forerunner of today's FIA) was persuaded by Aintree officials that the new circuit would make a good home for the British Grand Prix. While it was similarly flat to windswept Silverstone and could boast only the heavy industry of Liverpool as a backdrop, Aintree's ace card was its facilities. As the racecourse was host to the largest horse race in Britain, the grandstands and spectator amenities were second-to-none and used to handling enormous crowds. It was enough to make the blazers sit up and take notice...

The largely flat circuit measured exactly three miles and was built at a cost of £100,000 in just three months, opening in May 1954. Winding its way around the perimeter of the horse racing track for its first half, the course then ducked across the turf to run through its centre in a technical infield section. A smaller club course consisted of the interior portion only.

Initially operating anti-clockwise, by the start of the 1955 season the racing direction was reversed. Aintree was awarded the British Grand Prix that year and, in jubilant scenes, Stirling Moss made history by being the first British driver to win his home race. To this day Moss does not know whether the win was earned on merit or a 'gift' from Mercedes team mate Juan-Manuel Fangio or ordered by team boss Alfred Neubauer; either way, the crowd went home satisfied.

Aintree also witnessed another slice of history when it hosted the 1957 Grand Prix, with Moss and Tony Brooks winning for Vanwall - the first such success by British drivers in a British car. Further Grands Prix were held in 1959, '61 and '62, with the circuit ever-popular with spectators because it the grandstands gave undisturbed views of the whole course.

Even the unrivalled facilities could not save the Grand Prix from moving south to Brands Hatch in 1964. The ever-rising speeds, lack of room for run-off areas and other safety concerns (at several points drivers found themselves aiming between concrete pillars with very little room for error as they negotiated curves) meant that the exodus was probably inevitable.

Not that the Grand Prix elite were the only competitors benefiting from the Aintree course; from the very beginnings the Aintree Circuit Club (ACC) had been formed by local motor racing drivers and officials (Mrs Topham as the first President) to organise Tuesday evening testing on the Club Circuit. These events were fully marshalled and based in a former RAF dispersal hut that became the Club House. The ACC would continue be responsible for the maintenance and management of the Club Circuit until 1999. Under their watch, the pit lane was developed and Armco erected around its perimeter.

Only one person has ever competed in both horse and car races at Aintree. Spanish nobleman Alfonso de Portago twice rode as a gentleman jockey in the Grand National, before turning his hand to motorsport and driving a sportscar on the Grand Prix course. He had been due to take part in the 1957 British Grand Prix with Ferrari when he was killed competing in the Mille Miglia.

The full Grand Prix course soldiered on for one more year in 1964, before Mrs Topham announced that Aintree was to be sold off for redevelopment. This proved something of a long drawn out saga, with multiple court hearings as the Topham's sought to overturn a covenant put on the land when it was acquired from the Earl of Sefton in 1949. This stated that Aintree could only be used for agriculture or horse-racing during his life. It took an appeal to the House of Lords to finally find in Topham Ltd's favour in 1966.

Aintree was finally sold to the Walton Group owned by property developer William Davies in 1973, but planning permission was never granted for housing. Car racing continued on the short course through the 1970s, though inevitably the scale of events held became smaller and smaller. The last large-scale event was held in 1975, when Gunnar Nilsson's March-Toyota F3 car won the Blakeford Trophy.

After mortgage payments were defaulted on in 1976, management of the course was passed onto bookmakers Ladbrokes, on a year-by-year basis until 1983. The ACC enjoyed an excellent working relationship with the new management and was given complete autonomy over the running of the racing circuit.

In 1977, Richard Peacock (a club member) opened the Aintree Racing Driver's School, which operated on a Tuesday under the auspices of the Club with the Tuesday evening Members Testing also very healthy.

In the summer of 1982, the facility was once again put up for sale, which ultimately led to the cessation of car racing. While there had always been occasional problems with errant cars causing damage to the horse racing track, the issue came to a head at one of the Tuesday evening test nights, when five minutes before circuit closure a car went off and stuck the jump at Bechers Bend.

Understandably, Ladbrokes didn't want prospective buyers to visit the circuit only to find holes in the jumps, so the ACC agreed a temporary suspension of racing and testing, although the Racing Drivers School continued to operate. Following the cessation of racing, the ACC continued to meet each week but it was not possible to get agreement on protection of the jumps. Bike racing was still permitted, however (presumably as it was considered less likely to cause major damage) and the Aintree Motorcycle Racing Club continues to host five meetings and one general test per year.

In 1984, the ACC rebounded, organising its first Single Venue Tarmac rally at the track - something it would continue to do until 1990. In 1985, they also reintroduced sprinting to the venue and by 1991, the club was running two rounds of the British Sprint Championship – the only club to do so, with a total of five sprints per year. Saturday track days were also introduced in 1987.

The economic depression in the mid 1990s saw entries drop by nearly 50%. At the same time, the Jockey Club had opened their Golf facilities and had doubled the cost of renting the track to compensate for their losses when it was closed. This had a massive effect on Club finances – the ACC was still the only motor club still running events at Aintree - and also resulted in the closure of the racing school.

In 1997 the ACC announced plans for a major event that would run on the full 3.0 mile circuit, to celebrate the 40th Anniversary of the historic 1957 GP at Aintree. Sadly, these had to be cancelled at short notice due to difficulties with the racecourse management and, with no income generated, the club had event liabilities it couldn't meet and stopped trading in 1998.

Members of ACC reversed into Liverpool Motor Club - which up to that point only had one paid up member - and took over the running of the Sprints and Track days. Once the ACC had cleared its debts, however, it rebounded by successfully organising the Aintree Festival of Motorsport in 2004, to celebrate the 50th anniversary of the Grand Prix track. This attracted over 250 historically significant racing cars with a combined value of over £100 million, boosted by two Gala Dinners hosted by Sir Stirling Moss, Tony Brooks and Roy Salvadori. Over 20,000 racing fans turned out in freezing but sunny November weather.

Shortly after this, the bulldozers moved in to start the Aintree redevelopment programme, which involved the building of two new starts for the horses on the outside of the historic Tatts Corner, the long right-hander which leads onto the historic start/finish straight. Despite this, apart from a flower bed built over the Melling Crossing and the slight encroachment of a tractor shed on the approach to Tatts, the Grand Prix course remains in its entirety. Gates bar the way at several points and speed humps make for slow progress elsewhere but, some of the Grand Prix loop still sees action once a year – as the television camera car races alongside the horses during the Grand National!

The ACC continues to promote and support the heritage of the circuit. There is also strong manufacturer interest for car launches, filming and other car-related events and the ACC regularly works with media channels to facilitate the production of TV programmes, trips and visits.

With thanks to Michael Ashcroft, Chairman and Director of Aintree Circuit Club, for additional background information.

Planning a visit to Aintree? Find the best deals near to the circuit on hotels, apartments and rooms to rent from the map below.

Aintree Circuit is located within the Grand National course at Aintree, in the northern suburbs of Liverpool, Merseyside. The nearest airport is Liverpool John Lennon Airport, around 25 minute's drive to the south of the city.

The circuit is close to both the M57 and M58 motorways, though the entrance is different to the main horse racing course itself. From the M57/M58 interchange, follow the 'Aintree Race Course' brown tourist signs. At the second set of traffic lights, turn left into Aintree Lane (signposted 'Melling'). After half a mile or so, turn right into Melling Road (signposted for the Aintree Golf Centre), then left into the circuit just over the bridge.

Aintree railway station is less than a mile away and around 15 minute's walk from the circuit. Fazakerley station is also close by – around an 18 minute walk to the circuit. 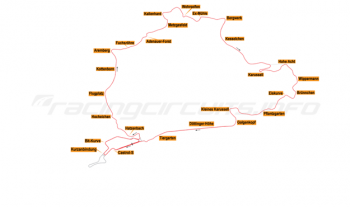 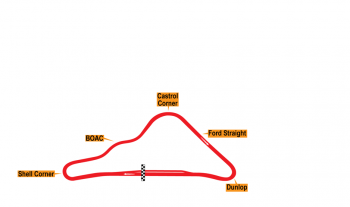 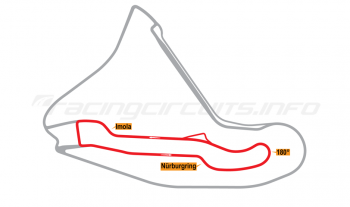