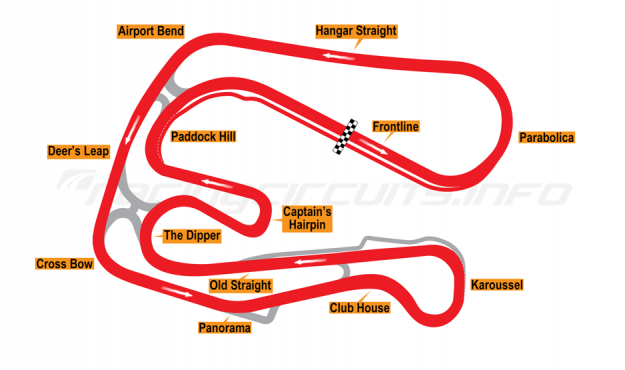 Sweden's most southerly circuit, Sturup Raceway is a tight and twisty roller-coaster ride next to Malmo Airport, which offers little in the way of respite for riders and drivers, who must navigate one turn after another, with little in the way of straights to allow vehicles to stretch their legs. This is one circuit where handling will win out over horsepower every time and, unsurprisingly, makes for an ideal venue for drifting.

It began life in the early 1970s as a small dirt track, built to cater for the local folkrace events. Only 680-metres long, it was extended in the mid-1970s with its first asphalt sections, bringing it up to 880 metres and allowing it to host rallycross. In this guise it enjoyed some success and its reputation grew.

In 1990 the track was upgraded once again, becoming fully asphalted for the first time, with a further extension bringing the length up to 1.1km. Attention now turned firmly to circuit racing, as well as providing facilities for testing and driver education. Sturup's close proximity to the famous Øresund Bridge - and thus easy access to Copenhagen and Denmark more widely beyond - meant that soon the track was attracting interest from a wide radius.

In 2001, this interest resulted in new ownership, when investment banker and racing enthusiast Lars-Christian Brask bought the facility as part of his ambitious plans to create a step-ladder of talent for promising young drivers to get to Formula One. Through his Team Brask organisation, he began managing the careers of Allan Simonsen, Giorgio Pantano and Andy Priaulx, establishing teams in F3000 and also in touring cars. Developing Sturup as a base for these activities was a logical continuation of the project.

Plans were soon announced for a track extension to bring the circuit up to international standards, with the aim of securing FIA certification, allowing for a more diverse portfolio of racing to take place. The project was conceived as taking place in two phases; for 2004, the existing circuit would be refurbished and extended by adding a new loop at the final turn and an extended pit entrance.

This was followed in 2005 by a more ambitious extension on land to the north of the original track, which also featured a new pit lane and paddock buildings. This brought the length up to over 2.0 km for the first time and also allowed for a variety of different variations to be operated simultaneously (the original pits have been retained). Minor modifications to straighten the exit of the Karoussel corner in 2007 aside, the template was set for the current circuit.

Ironically, by this stage Brask was no longer involved as he was forced to sell his boutique investment bank Brask & Co in the beginning of 2003. Control of the track then fell to property tycoon and sometime racer, Carsten Levau, whose Centreplan company took over ownership.

The new circuit layout allowed the hosting of more major events and 2005 saw the first visit of the popular Danish Touring Car Championship. Michel Nykjær thus has the honour of taking the first victory on the new circuit's inaugural meeting, when he triumphed for Seat. The following year saw Jan Magnussen win the repeat event for BMW, after which the more prestigious Swedish Touring Car Championship replaced the Danes as the headline event. For 2007 Fredrik Ekblom continued the run of wins for BMW, followed up a year later by Richard Göransson.

At the end of 2008, the track found itself in limbo when Centreplan went into bankruptcy as the economic crash took hold. Despite protestations that this would have no effect on the track's proposed 2009 fixtures, set to include both the STCC and DTC, neither went ahead as the struggle to find new owners continued into the next year. It took until August 2009 to finalise a deal, when the track was sold to former rally driver and Swedish champion, Cemoni Ohlsson, who is also the owner of the Tierp Arena circuit and drag racing facility.

With ownership arrangements now stable, the STCC - by now a pan-Scandinavian affair - returned in 2012, with Tomas Engström taking the first race for Honda and Michel Nykjær winning the finale for Chevrolet. The following year saw the STCC choose to focus on Sweden's traditional main circuits and Sturup was dropped from the calendar. It remains to be seen if it will ever return.

Today, the track is licensed for a wide range of motorsport activities, from racing, drifting,
superkarts as well as motorcycle classes up to and including Pro SuperBike. Daily business at the circuit is supplemented by conferences, meetings and private events. The venue has been used by a number of European and Asian car brands to launch new models – Audi, BMW, VW, Nissan, Subaru, Samsung, Pirelli and Goodyear have all showcased new products there in recent years.

The circuit is easy to reach, being located next to Malmö Airport and a short distance from the E65 highway. From Malmö, head out on the E65 towards Ystad. Shortly after Svedala, follow the signs for Sturup Airport, which will lead you to the circuit entrance.

From Copenhagen, take the E20 across the Øresund Bridge, then join the E65, signposted towards Ystad and Sturp and follow signs to the airport, which will lead you to the circuit entrance.

Find the best hotel and room deals near to Sturup: